Secret tote bag swap, the Stars in the Loft story just keeps going on and how to make a lavender bottle

My secret tote bag partner Judy received her tote bag with all the goodies I tucked inside. She liked the little details that were appliqued and embroidered on the bag. 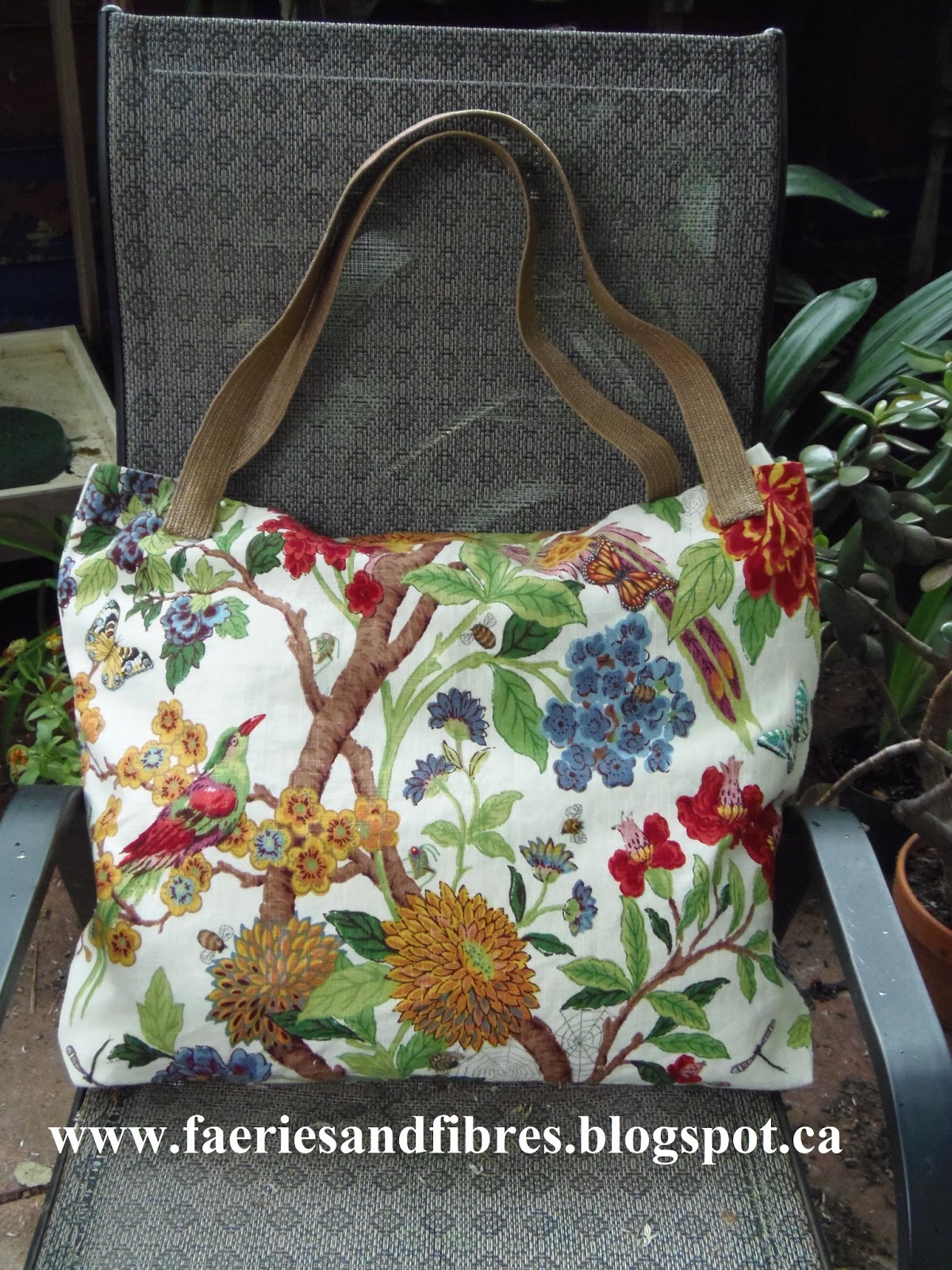 I tucked a number of little treats in the bag and here are a few of them: a large hexagon pincushion that I made, a pair of green scissors with a beaded scissors tassel that I made (makes it easy to find the scissors in a sewing basket) and a little zipped bag for sewing necessaries!﻿ 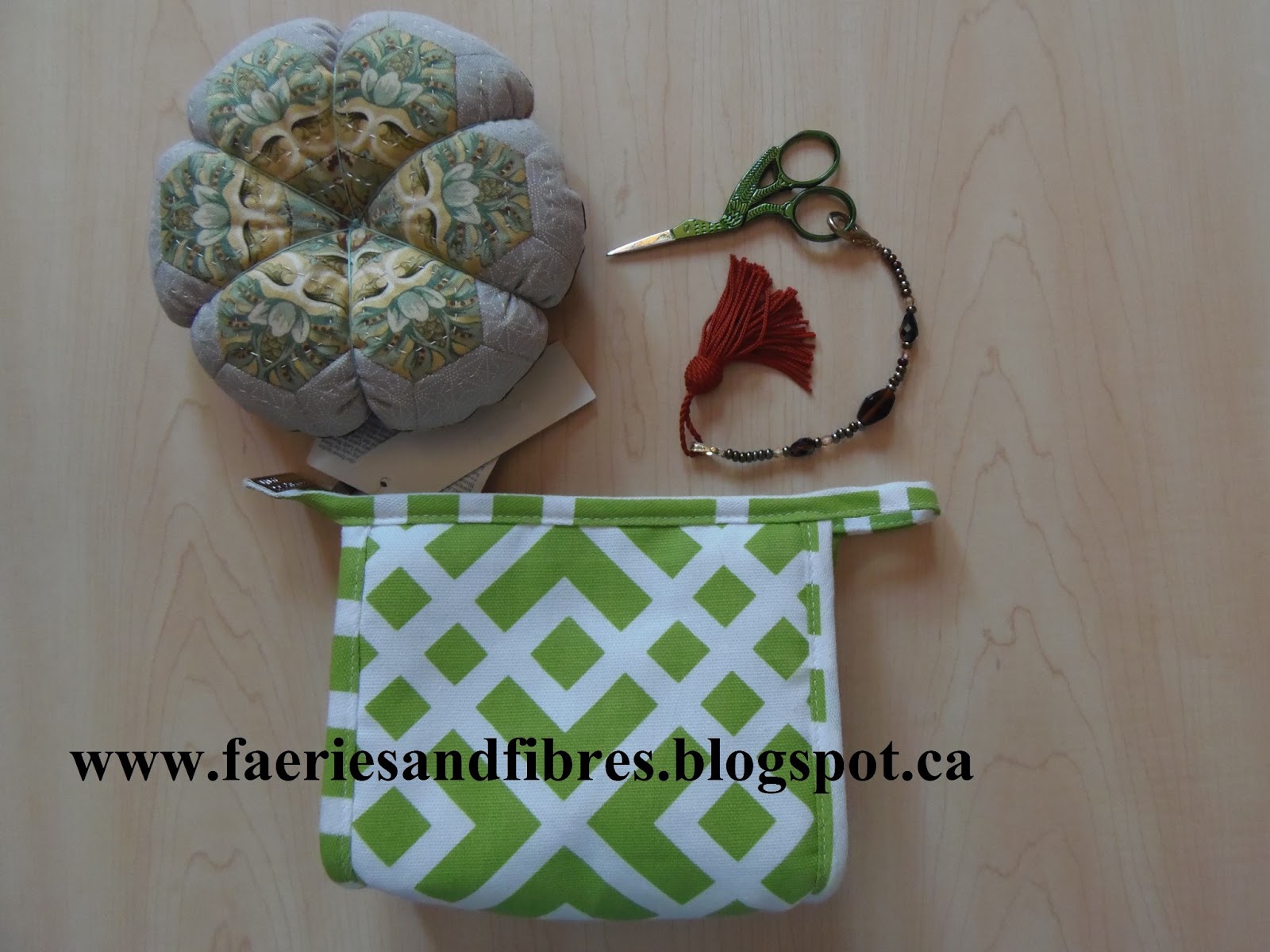 The tote bag swap was great fun and there are so many lovely tote bags to see on Flickr. If Lia organizes another I will participate for sure! I love the bag I received and have been using it every day. I also came across set of instructions for making a tote bag on a blog called She Can Quilt. You'll find the bag instructions here.

So you know I make Stars in the Loft many years ago and for thirteen years I searched for information about the maker, when it was made and what it looked like (all I had was a small black and white photograph) but I was unable to find any information. Then this year I found the original (c 1830)  and I was thrilled. And then I found a second version (c 1945). And yesterday I found a third version of the original (not including mine) and here it is! It was made by Miss Nellie Snape of Mottran St. Andrews, Cheshire and it is estimate that it was made in 1950-1965. It looks very different from the other three which you can see here. I drafted my own pattern based upon the original made in 1830 by Elizabeth Van Horne Clarkson in the US. I wonder how the other two came into being. The second was also made in the US in 1945 so it is possible that the maker, Bertha Stene saw the original made by Elizabeth Van Horne Clarkson but she must have had a picture of the original or a pattern to work with. The bigger puzzle is how did Miss Nellie Snape come to make this quilt? Was there was a pattern for this quilt and if so when was it made? If you should come across other versions of this quilt OR the original pattern  OR if you have an information about the original quilt I would love to hear about them. For those of you who are interested in hexagon/mosaic quilts visit Britain's Quilt Museum and Gallery. There are some interesting quilts and loads of inspiration! It is also where you will find Nellie Snape's quilt; you can zoom in on the quilt to get a look at her fabric and colour selections.
I wrote about lavender bottles and thought I should show you how my Mom, Anne H, makes her version of lavender bottles.
You need a large bunch of lavender stalks. Make sure that the stems are as long as you can get them. Removed the leaves so that all you have are the blossoms at the top. I should have used more stems than I used in this demo but it will give you the general idea.Tie the bunch of lavender together with a bit of ribbon. 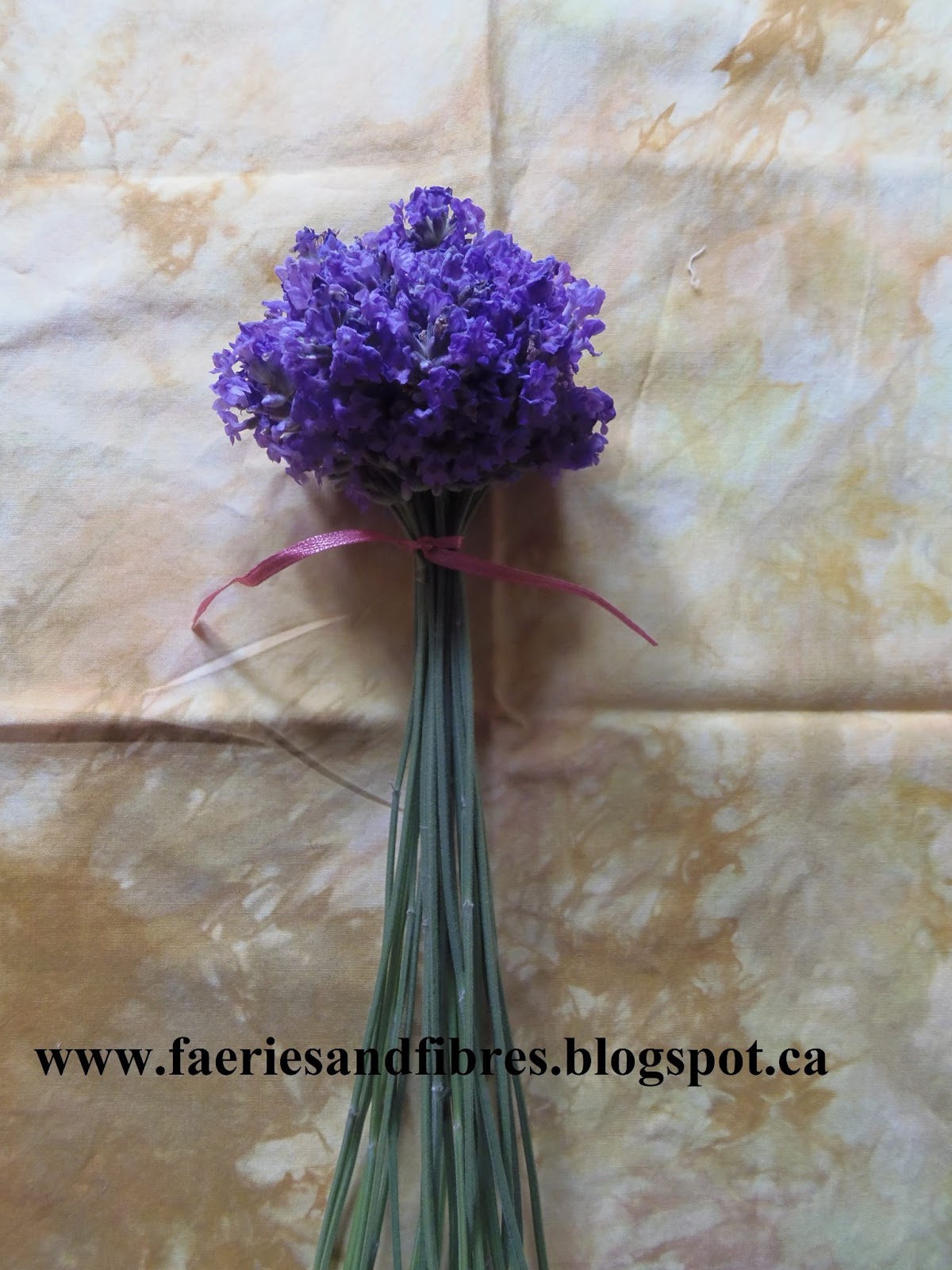 Hold the bunch of  flowers in your hand gently with the stems pointing upwards. Fold down a stem. 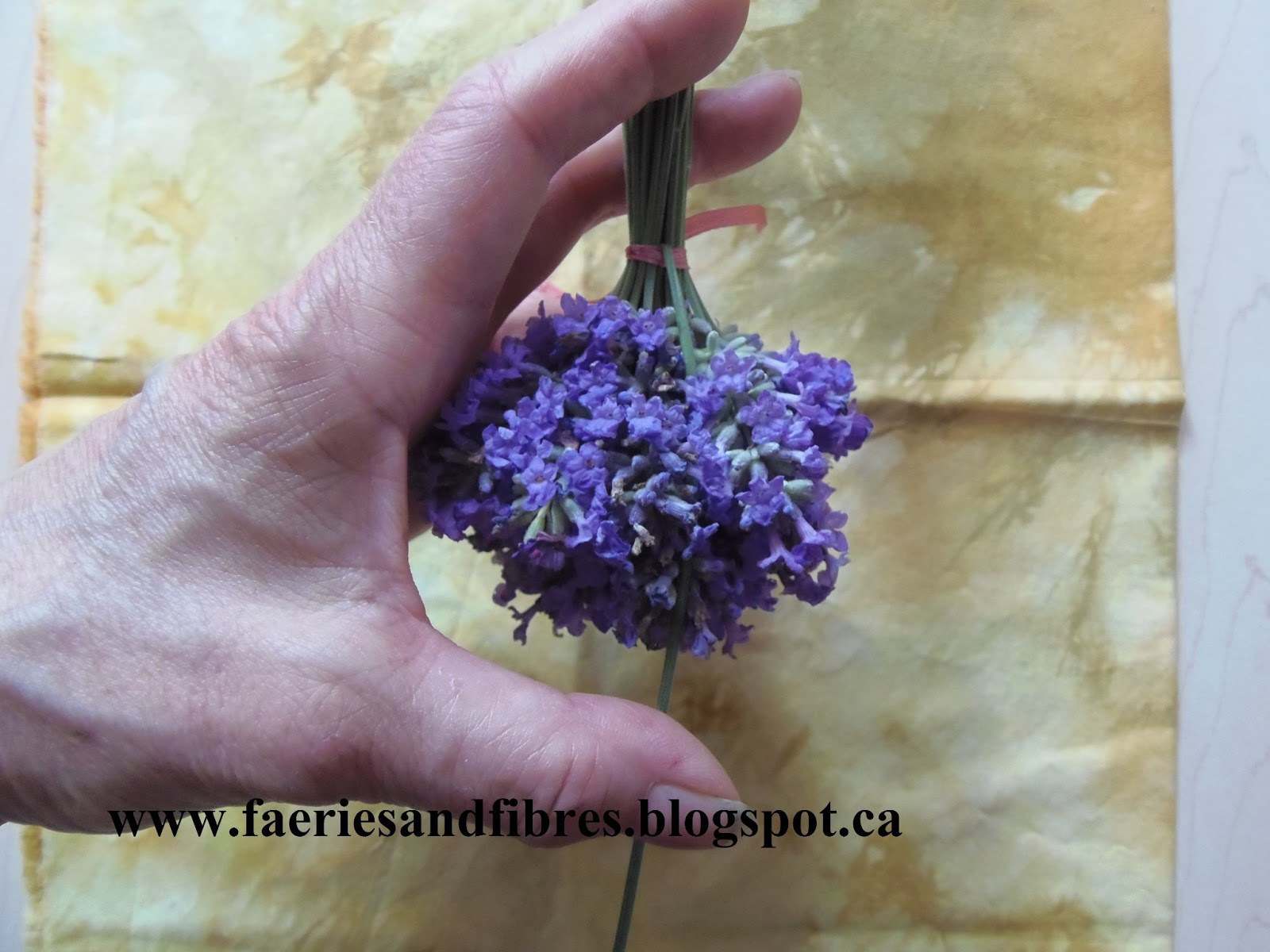 Working your way around gently continue to fold down the stems to make a cage to hold the lavender blossoms in place. 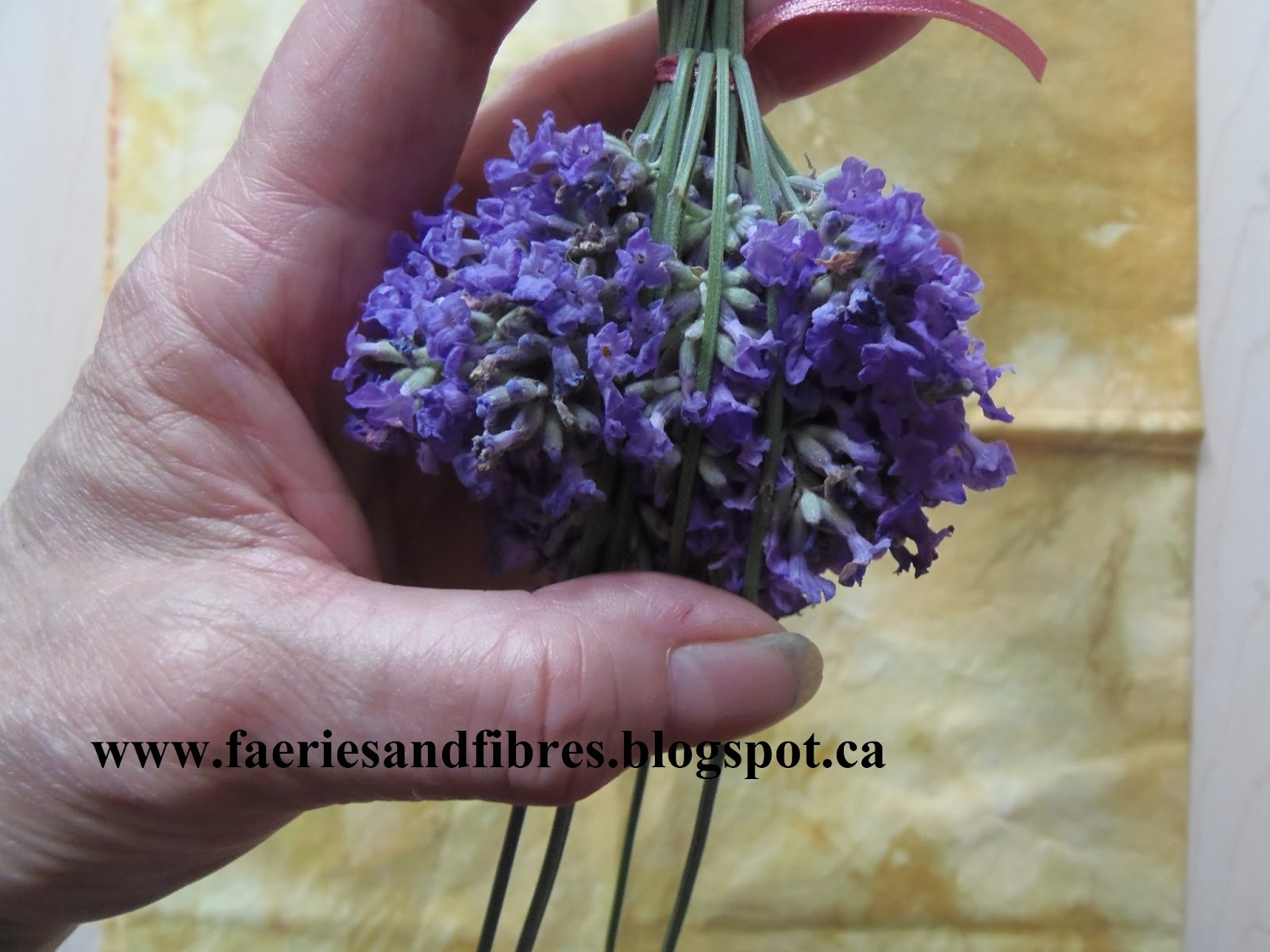 Work your way around the bunch of lavender until all of the stems are folded down. I should have used more stems so that the lavender ball was well covered by the stems. 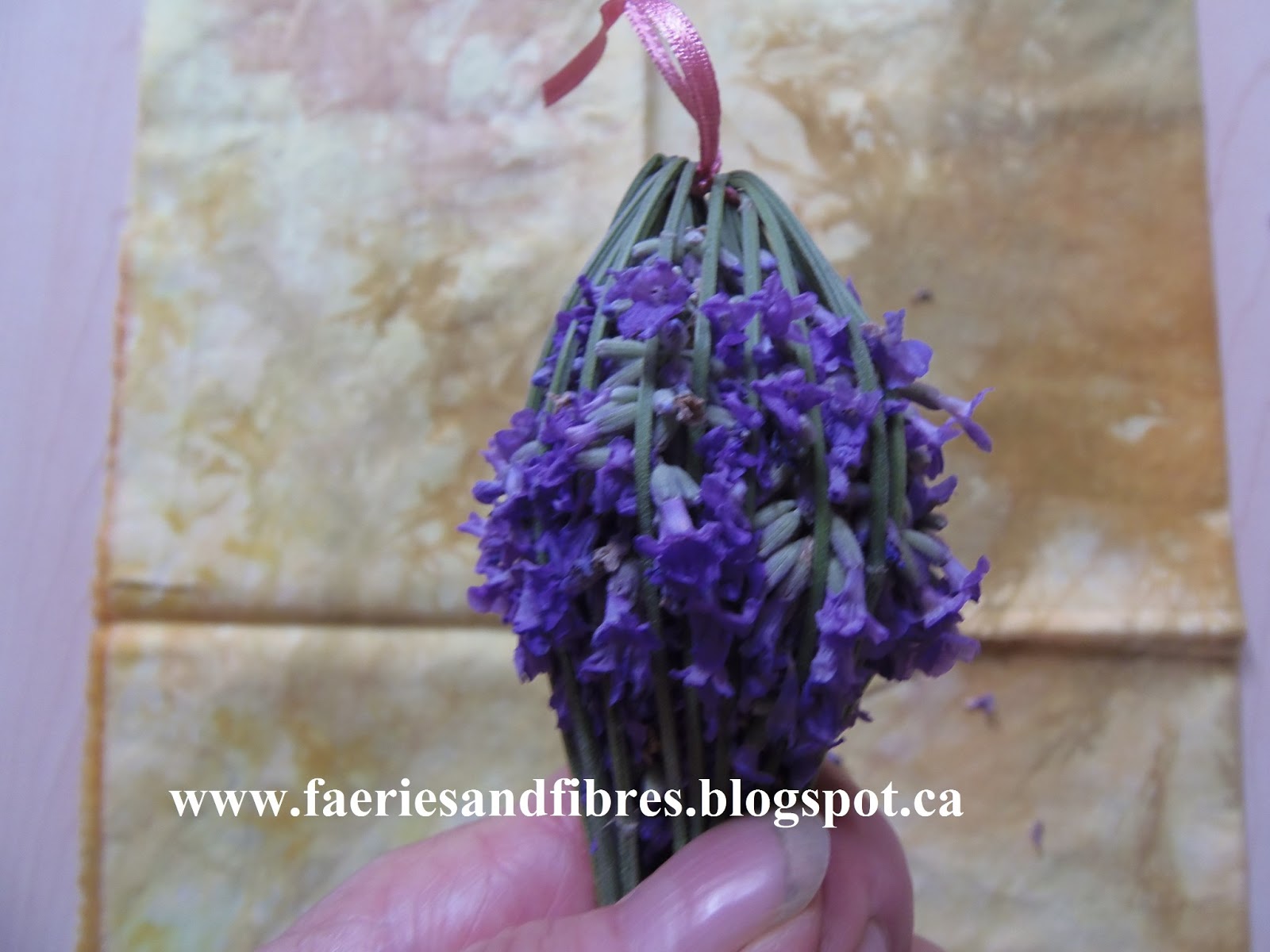 Tie off tightly with a length of ribbon and then tie a bow. 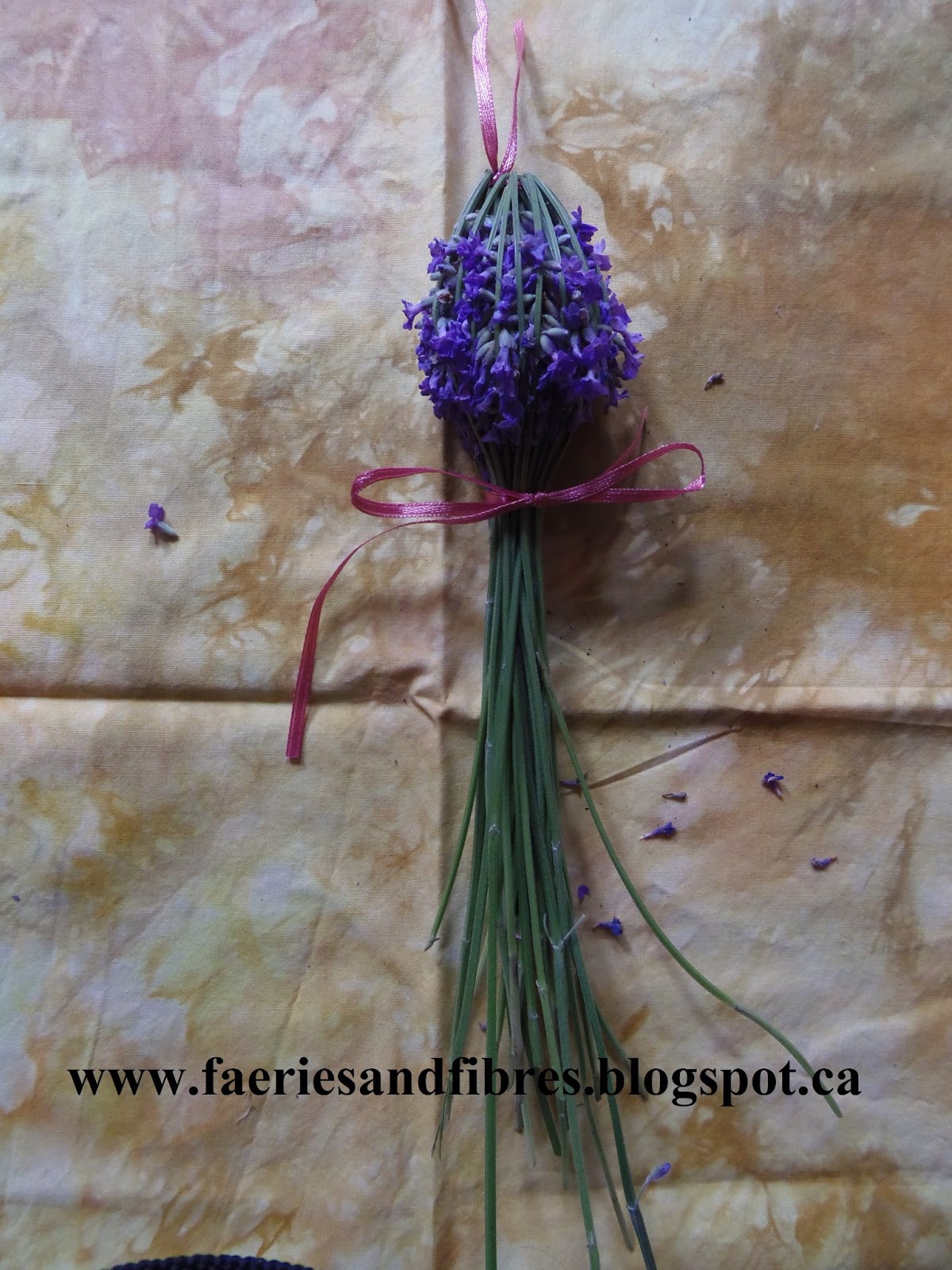 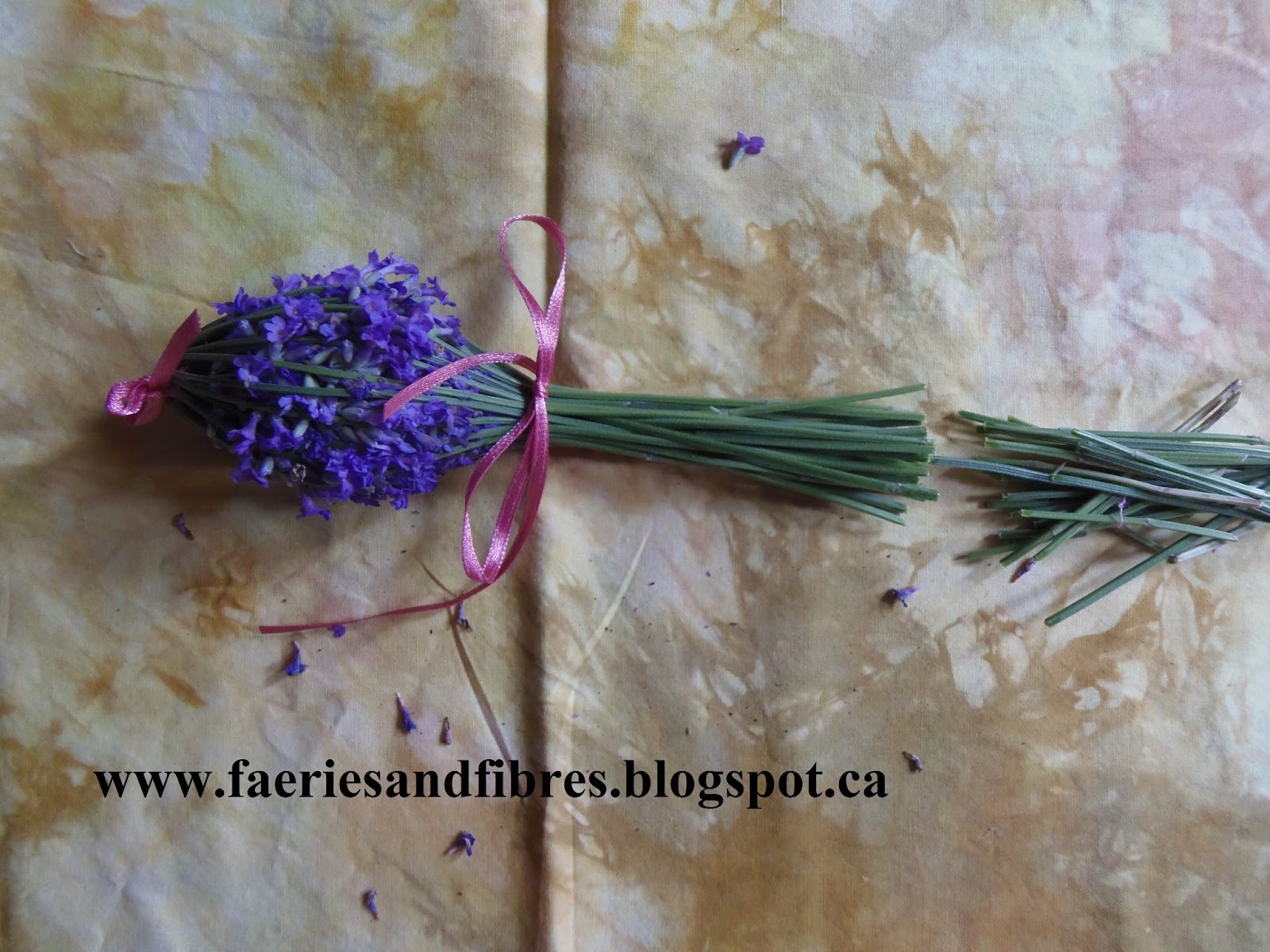 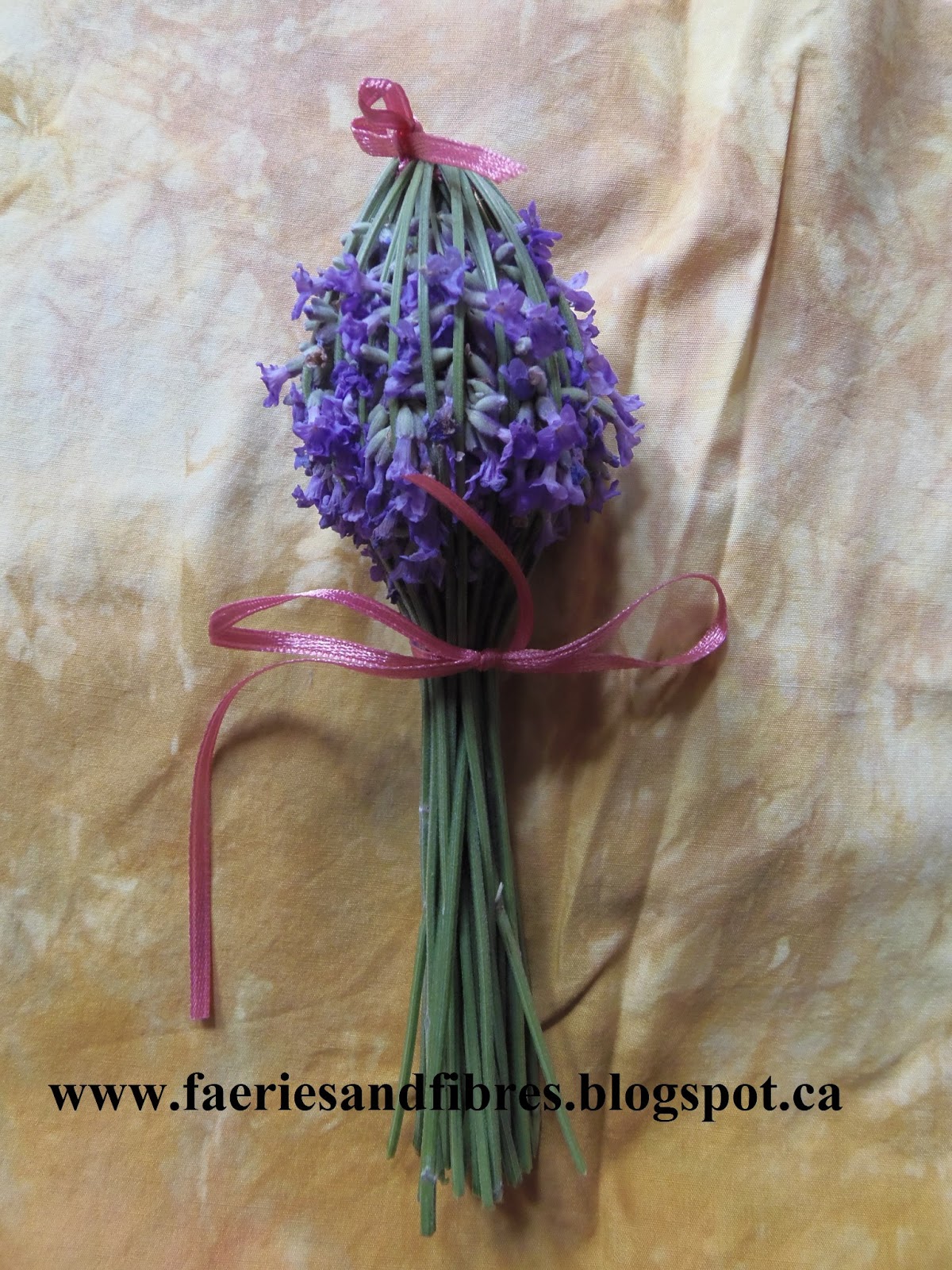 You can see that Mom, with her broken arm, did a better job than I did. Here is her lavender bottle! The lavender flowers are well contained by the stems. 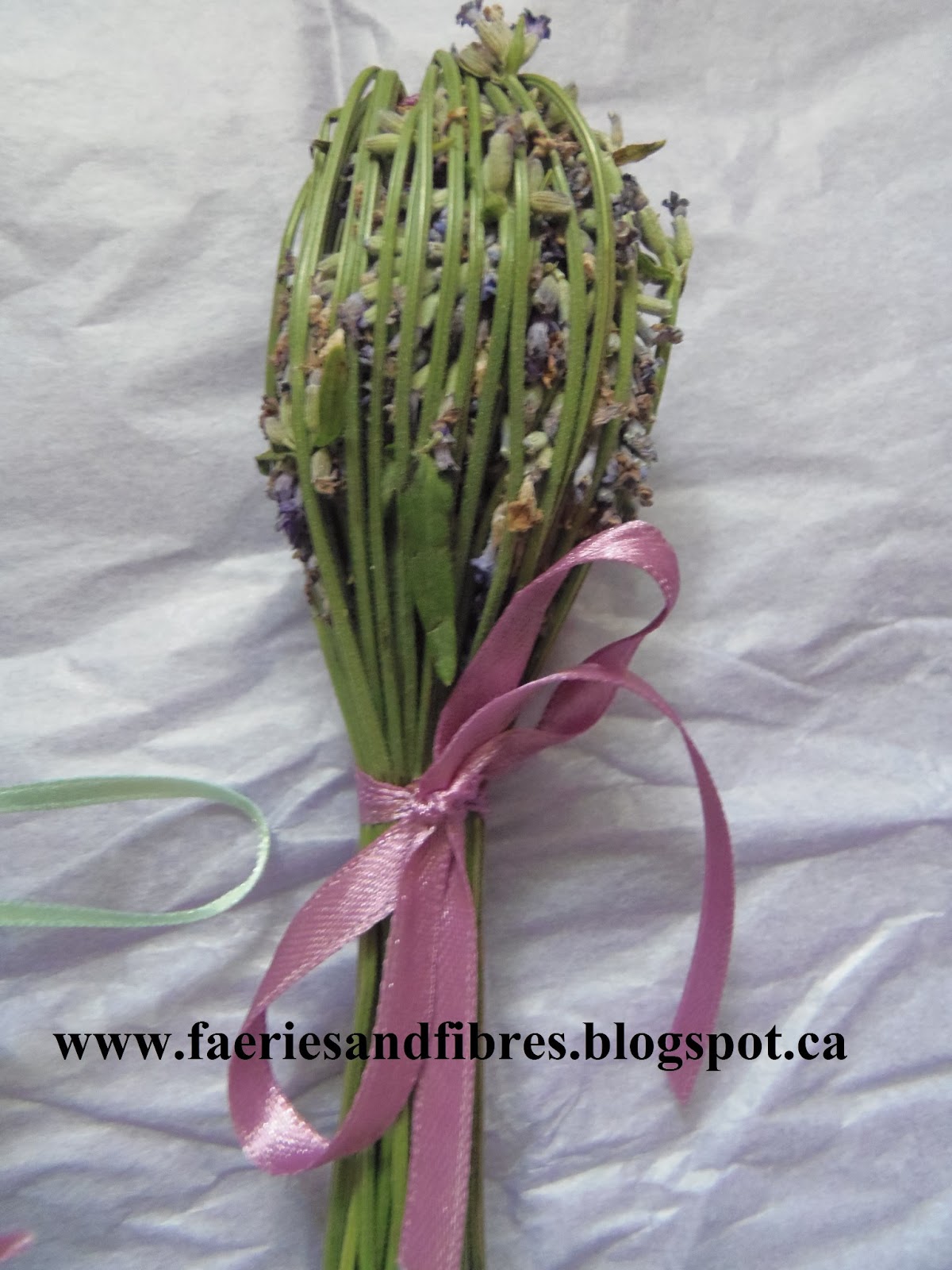 Not much in the way of sewing today but hopefully tomorrow I'll have some progress pictures of my Cherry Blossom quilt!
Until I post again, happy sewing!
﻿
Posted by Karen H at 8:13 AM

Email ThisBlogThis!Share to TwitterShare to FacebookShare to Pinterest
Labels: lavender bottle, Quilt Museum and Gallery, Stars in the Loft