Hexagon blocks of a different variety for The Empire Quilt

So why the silence? I was to have a bathroom renovation done. The work should have been done in four days but once the walls were opened there were problems with the plumbing. Major, costly problems. The result? Part of my kitchen had to be demolished to do the repairs so in addition to the total renovation of the bathroom, the kitchen must also be done. I had already packed up my bathroom and then had to pack up the kitchen AND worst of all I also had to pack up my sewing/computer room so that the workers could access the attic for the electrical work. The work is still not done. For the next couple of weeks I will be living out of boxes. I can't wait for this to be over with.

I've managed to tunnel my way to my computer in order to do a quick post about The Empire Quilt. I had said that there would be some different hexagon blocks for The Empire Quilt. Today I'll share two of them. Both are made with simple pieced blocks and hexagons. I dug into my stash of basted leftover hexagons. I never throw them out because they might just come in handy one day. The pink and green print in the pieced block is not at all in keeping with the scale and style of other prints used in the quit thus far but it works. Don't be afraid to combine your fabrics. If it doesn't work just do a little reverse sewing and try something different! 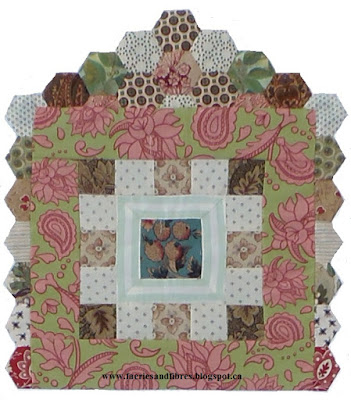 I think there are lots of possibilities for creating dimension with colour and value in this one but I decided to keep it simple. For example, I could have swapped out some of the grey fabrics for darker greys to create shading. 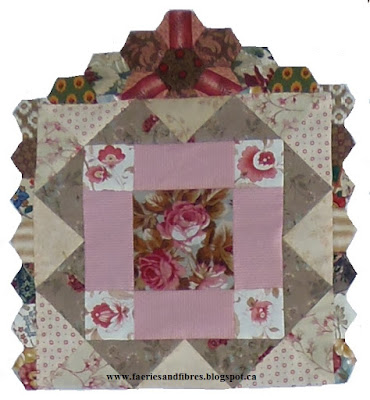 You be surprised at how fast and easy it was to make these blocks which combine traditional piecing with English paper piecing. It would be fun to make an entire quilt with blocks like this! Hey, I just gave myself a new idea. Maybe there's another quilt in the making!

There are two more hexagon blocks to share with you and they are bobby-dazzlers for sure! For now I have to work my way out of my sewing room because the contractors will be back shortly. There is white drywall dust and construction mess everywhere. I'm so done with it and eager to be done so life can get back to normal.