Lazy Punk is done so I'm moving on to Lazy Girl

I finished quilting my Mom's Lazy Punk. I stitched in the ditch on every seam and then I outlined every propeller in the blocks. I was going to quilt the background behind them but we decided we liked the nice clean finish. This quilt is going to be used so it will be great as is! I do like the feathers in the triangles! 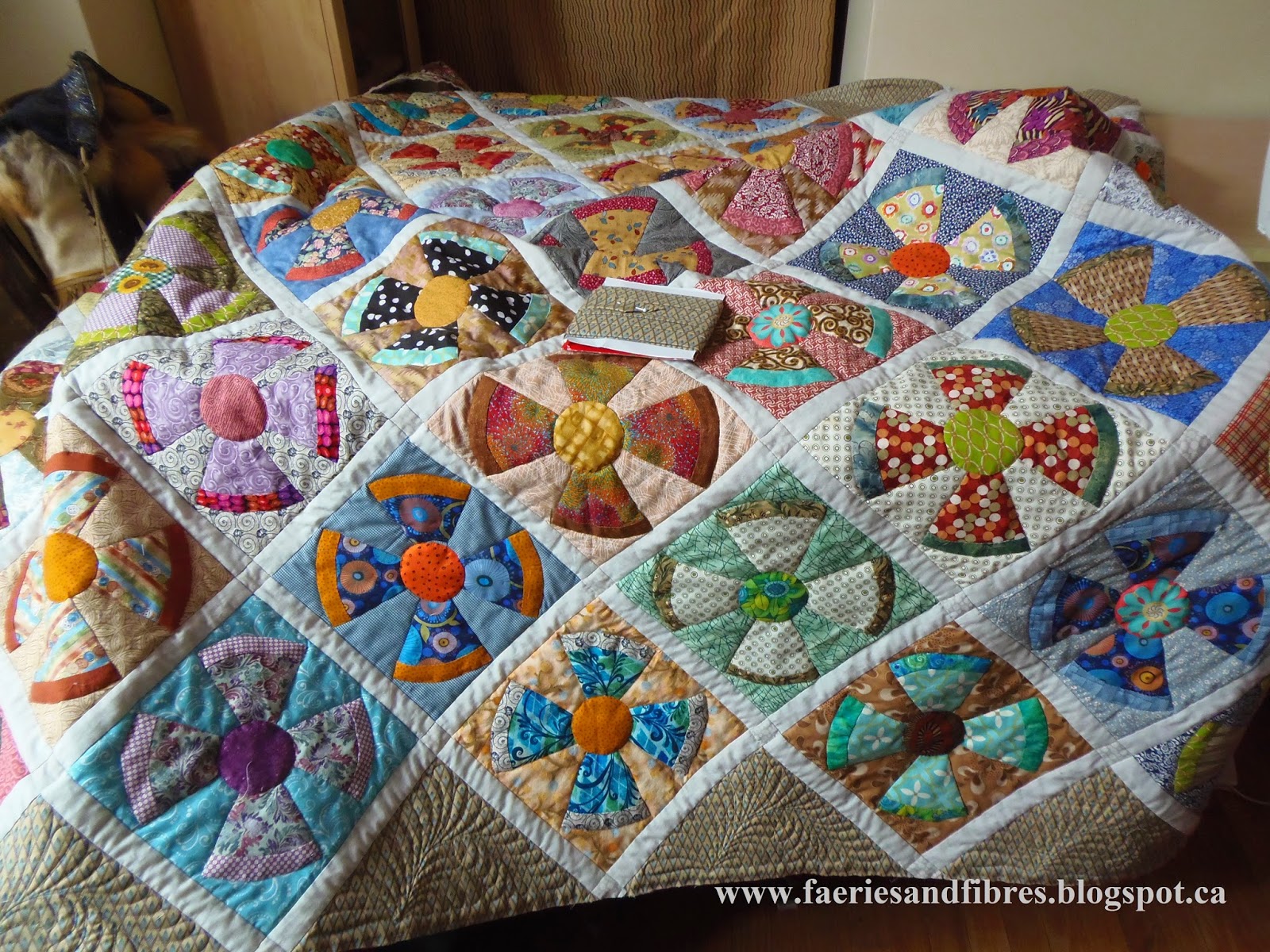 We always make our binding when the quilt top is finished, even if we aren't going to quilt it at that moment. I just wind it on a piece of cardboard and keep the quilt top and the binding together until I'm ready to quilt. Mom  is stitching down the binding so I'll take a picture and post it when she has finished. 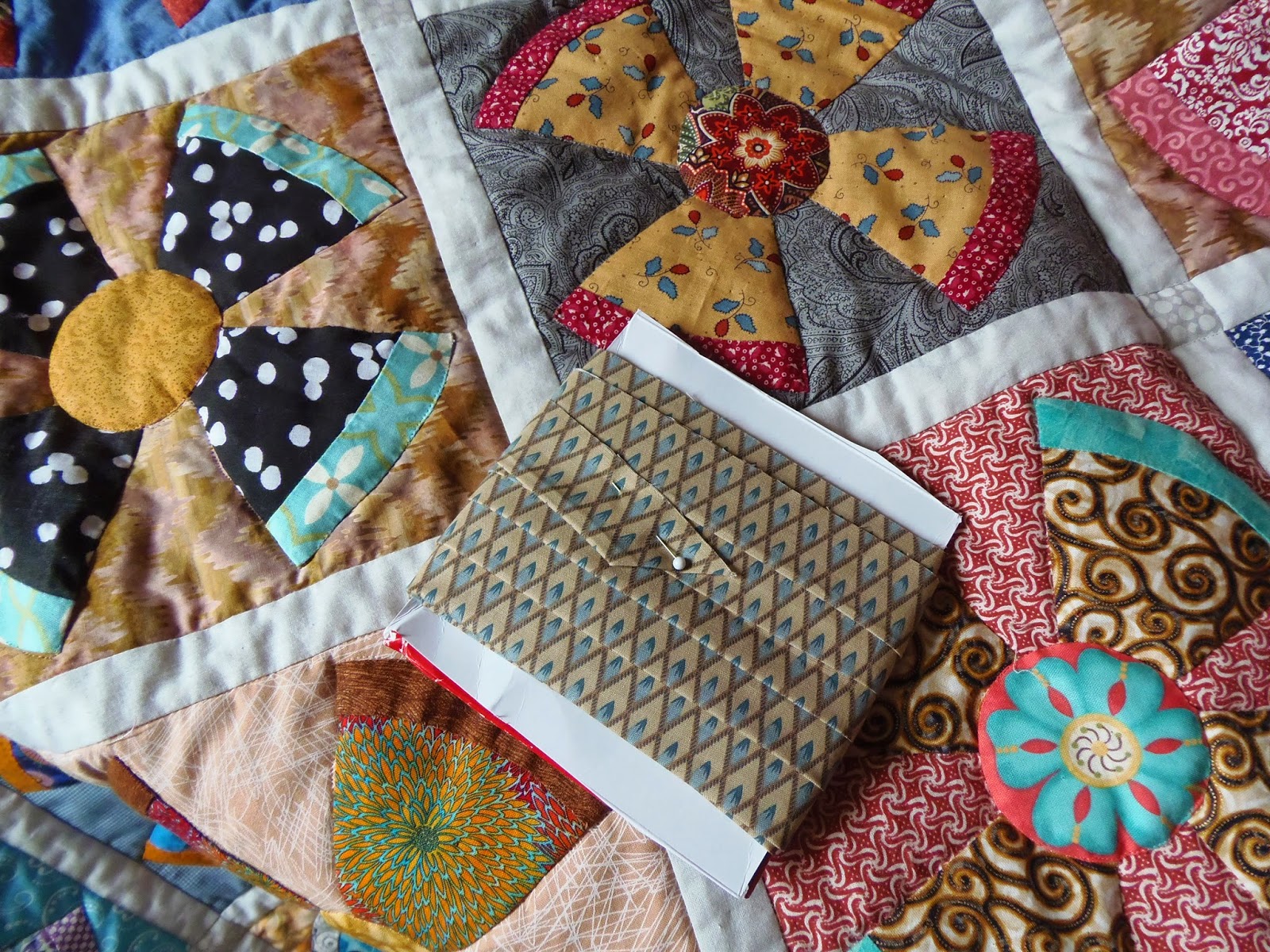 After I finished quilting Mom's quilt I pinned up my Lazy Girl quilt. It measures 60" x 80". I wish I had pushed out the edges of the circles to make them a little more square shaped. The background fabric is a very subtle grey print that almost has the look of burlap. It is 100% cotton and I got it in the home dec department of a fabric store. It was 100" wide and I think I paid around $6/meter. Can't go wrong with that! While pinning the quilt I ripped open my index finger on a bunch of pins that were in a tangle and in bled like crazy. Before I knew it I had two large bloody marks on my quilt. Normally I would use spit to remove my blood but I recently watched an episode of Fons & Porter and one of the viewer tips was to use hydrogen peroxide to remove blood so I gave it a try. It worked like a charm! 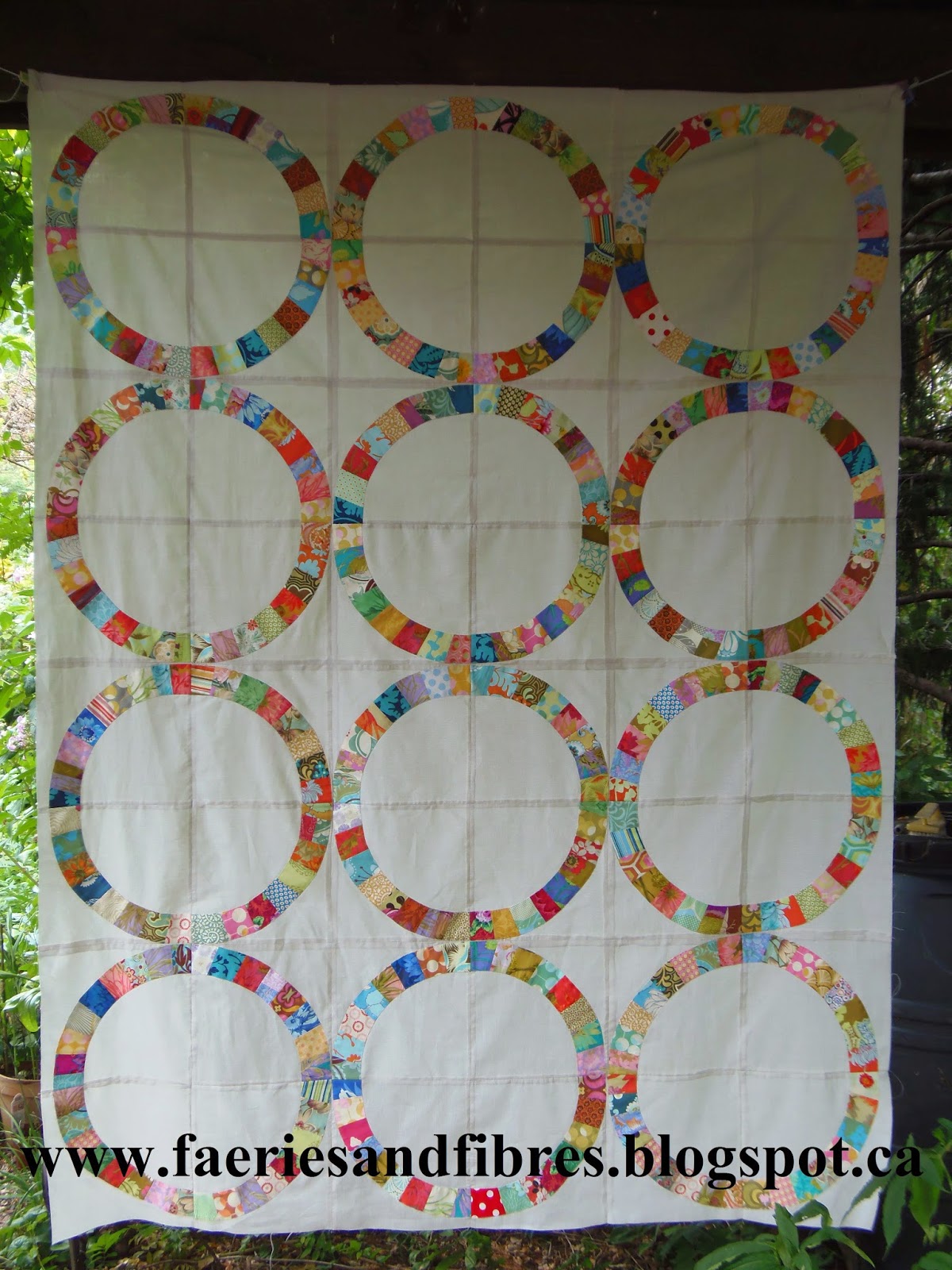 I found a pretty blue April Cornell floral print at a sale. Since this is more of a summery quilt I thought it would be a great backing. I matched up the print on the back. To do this I turned under the edge of the piece on the bottom to line up the print. I unpinned and took that piece to the iron and press the edge under the entire length of the fabric. I then used my glue stick. I applied glue to folded under edge, lined it up on the on the other piece of the backing and pressed to glue it in place. When the entire length was glued and the glue dried I just put the right sides of the fabric together and sewed on the fold line. The excess fabric was trimmed and the pattern on the back matched perfectly! 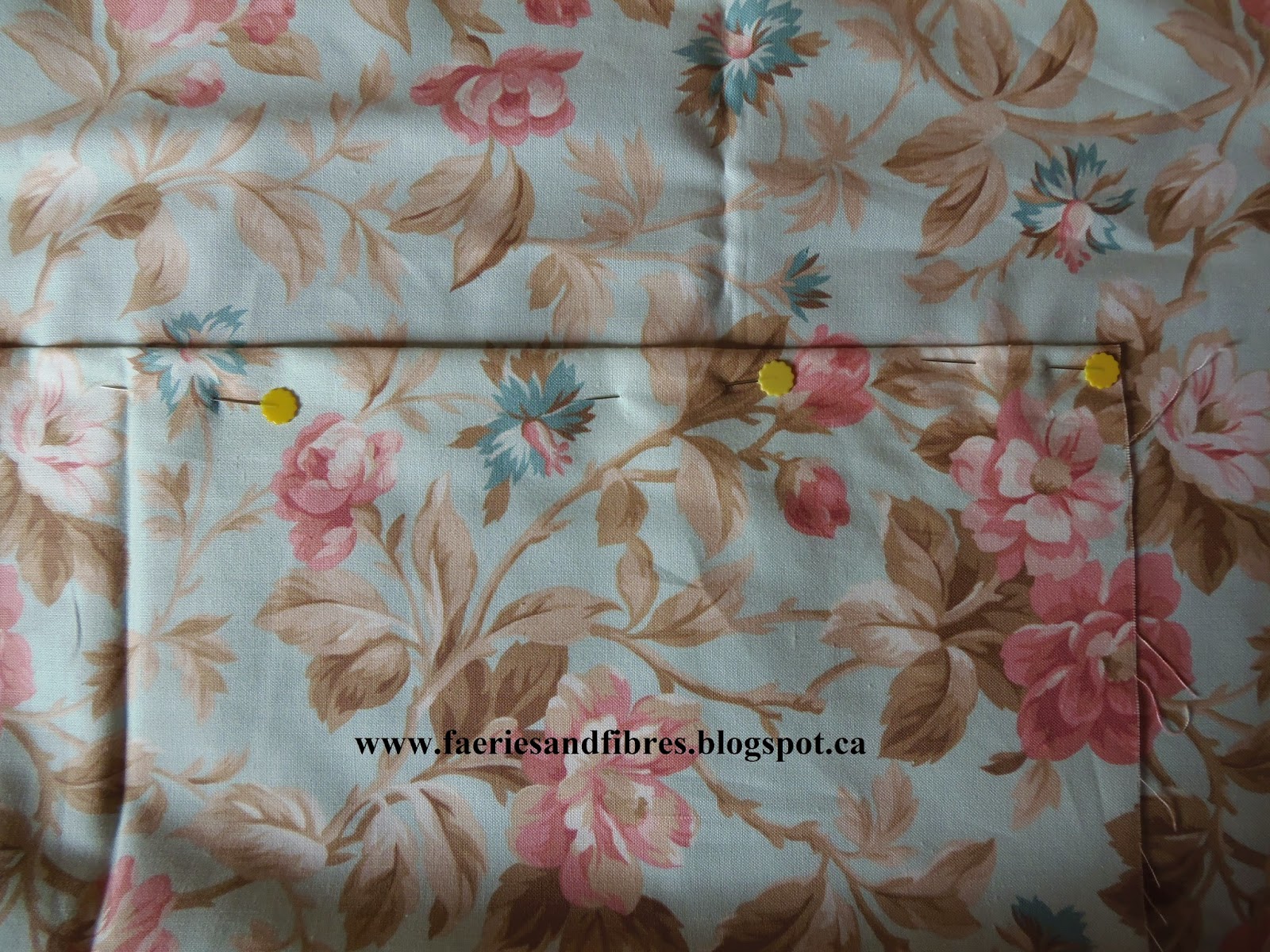 The first thing I did was stitch in the ditch along every seam with Superior's Monopoly on top and The Bottom Line in the bobbin. I then quilted all around each circle on the outer curve and the inner curve. Time to decide how to quilt it! I made this quilt because there is so much wide open space, what is also called negative space, where I could do some big quilting designs. The seams appear puckered in the photo but they aren't! 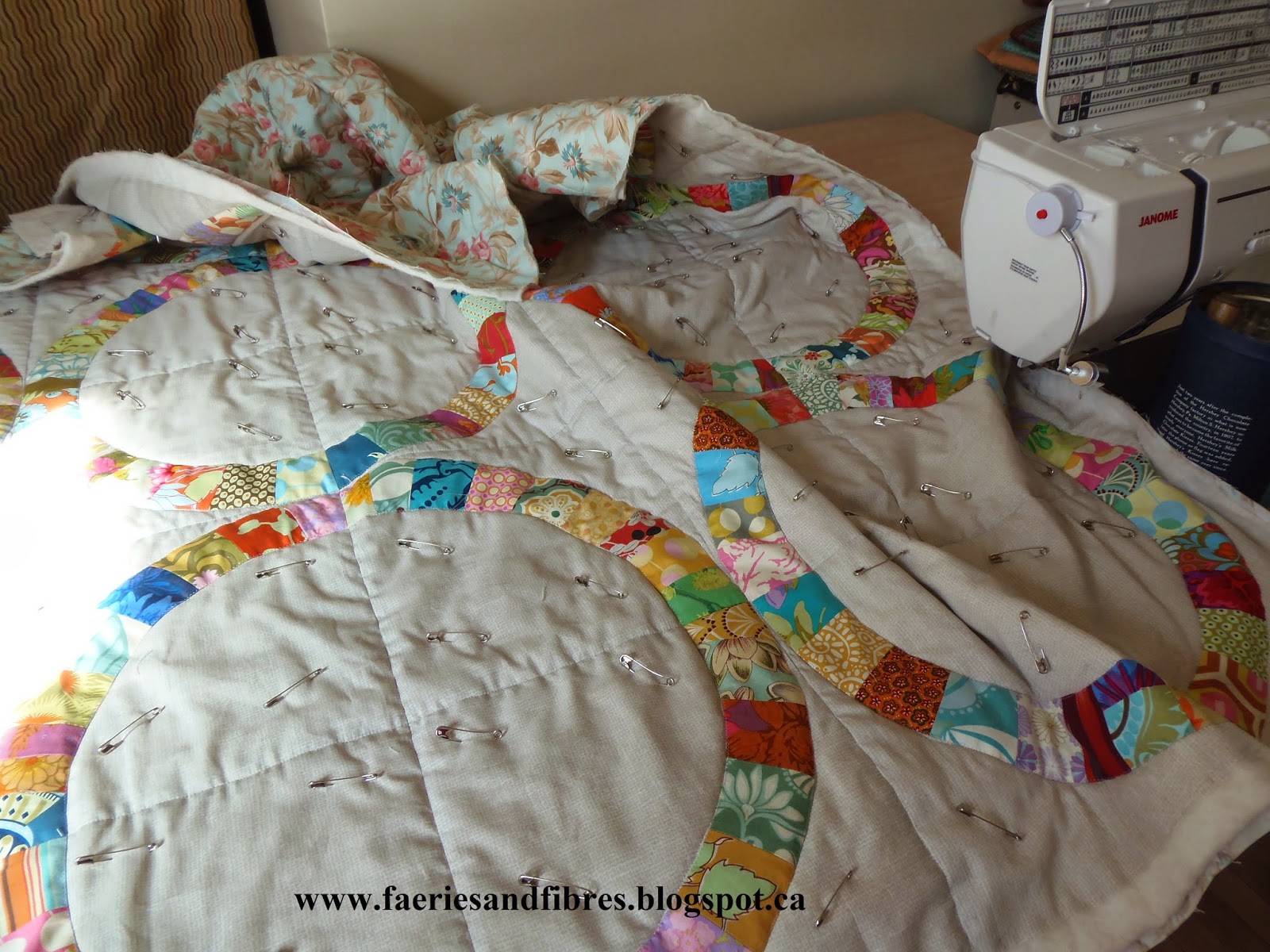 So now for the wide open spaces. What to do? Well feathers seem to be working for me lately so I guess I'll start with a feather than runs the length of the quilt! I threaded my machine with Superior's So Fine on top and The Bottom Line in the bobbin. I marked the spine as a guideline. I started at the top and stitched the spine. When I got to the bottom I quilted the plumes of the feather to the right of the spine. When I got to the top I came right back down on the other side of the spine about 1/4" away from the first line. 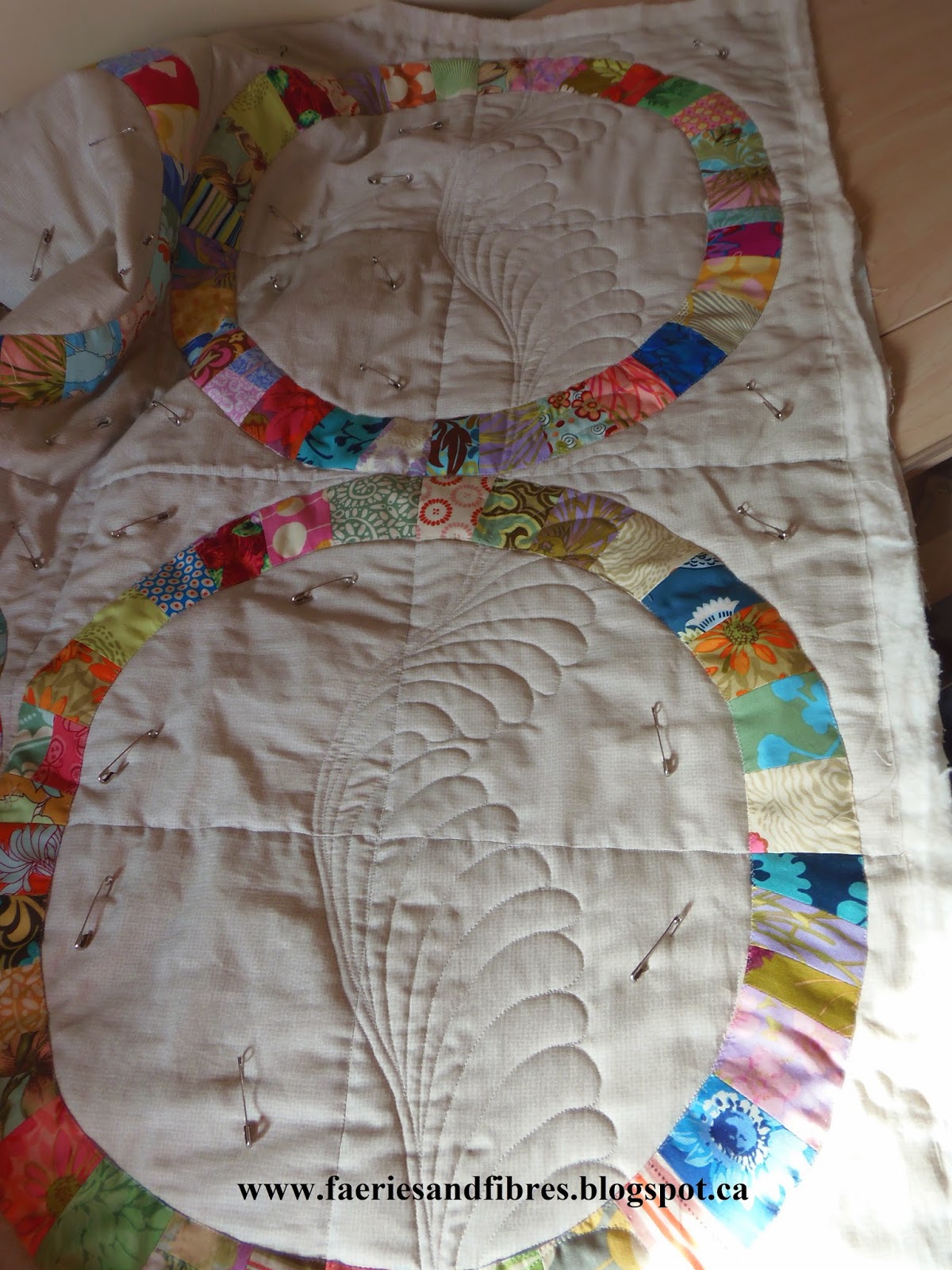 I then started quilting up the left side of the feather. The feather isn't perfect but neither am I and I'm okay with that! I'm not going to beat myself up over quilting that isn't perfect. I'm enjoying what I am doing and that's what is most important. 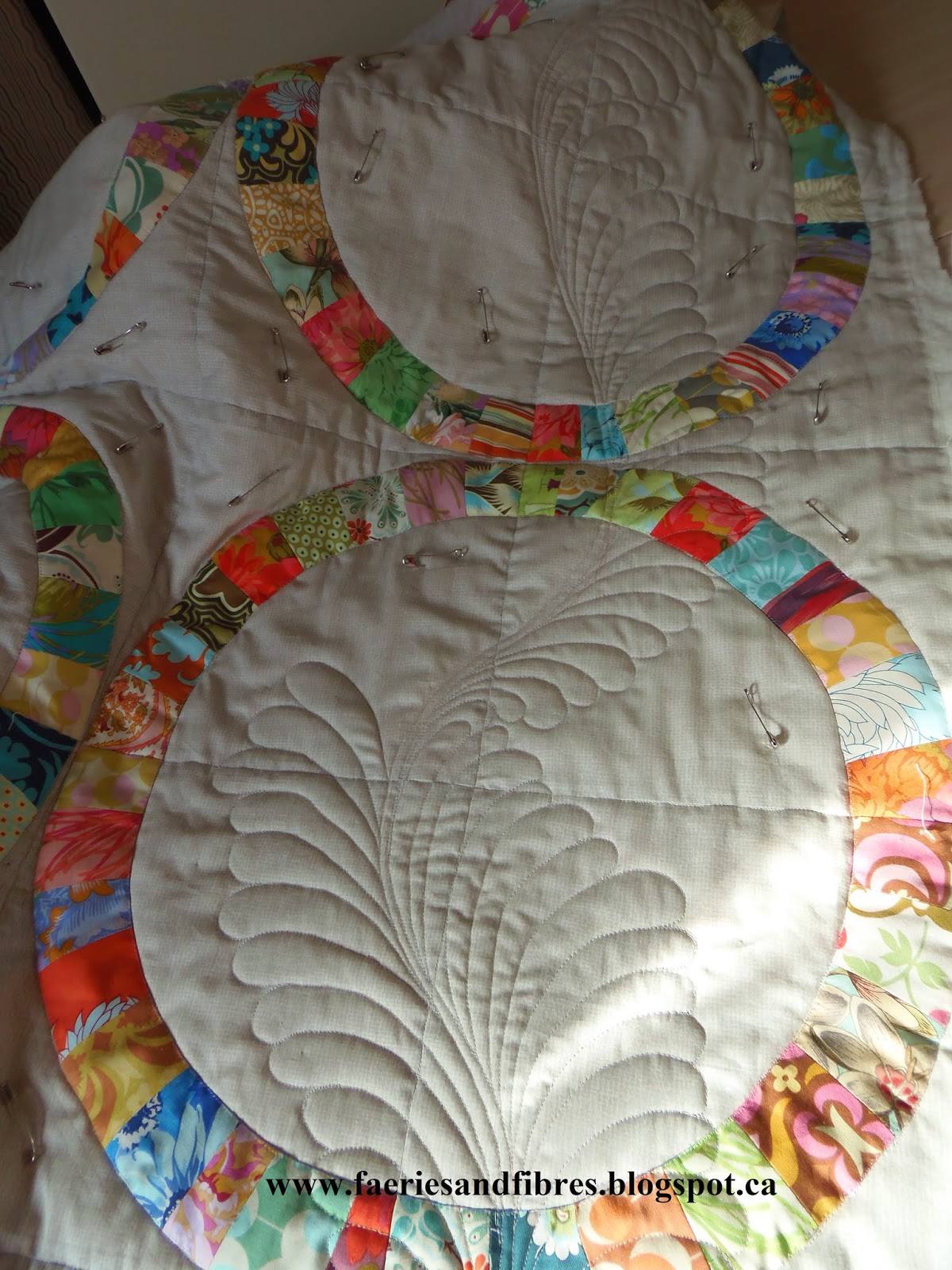 I'll echo quilt around the feather and then maybe stipple or meander quilt the rest of the background. I'll make the decision when I absolutely have to! 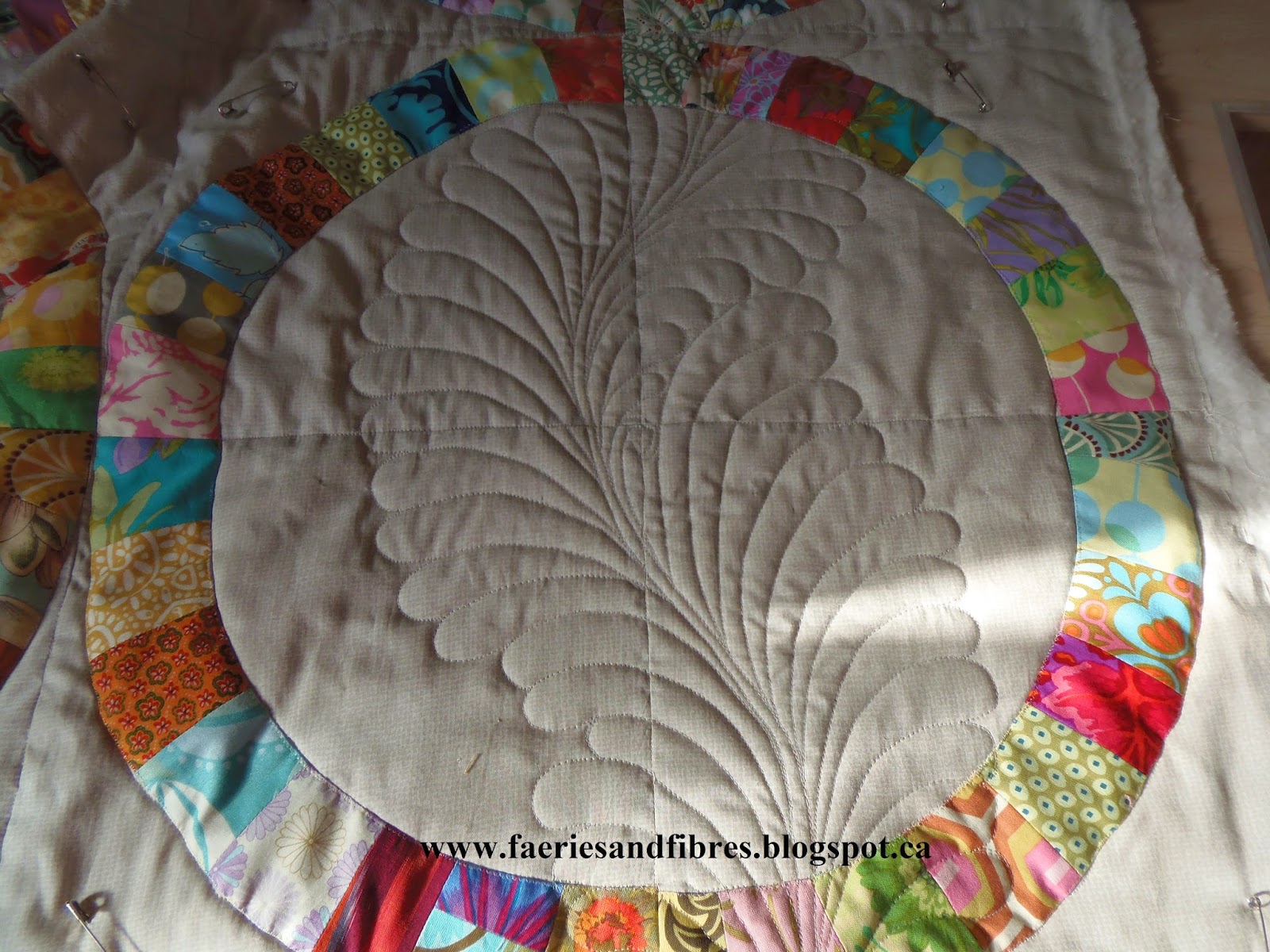 I've practiced feathers with a pencil and paper over and over and there is just no substitute for practice. Once you've got the movement down they go quickly and smoothly. The feather I quilted this afternoon took less that an hour and it covers almost one third of the quilt. I'll likely spend as much time filling in the background spaces but it will just add to the drama of the feather.

There'll be no  post tomorrow because I have a sewing day with friends. So until I post again, happy quilting!
Karen H
Posted by Karen H at 6:00 AM