More on removing ink stains and my Juki TL200Q Review

I had a comment from Cissa on stain removal with P&Gs blue Dawn dish detergent.  She told me she uses it to remove dye that has bled in her quilt.

Cissa applies a small amount of of Dawn to the area. Sometimes she spreads it on her hands and then on the fabric. If possible, she rubs it a little and then leaves it in a tub with water and Dawn for 15 minutes or more if needed. She keeps checking. She wrote that the longest she has had to leave it was about 30 minutes and the reason it took so long was one of her fabrics had bled and the batting was also stained. The final step is to rinse really well with cold water. Cissa learned this trick from a friend that dyes fabric and she said that Dawn is one ingredient short of Synthrapol. Another source told Cissa that detergents with better surfectants will do the job. Apparently they lift the colors and don’t allow it to be reabsorbed by the fabrics. While she wasn't sure of the science she was very happy that this method saved her quilt! I think I'll try this out and see how it works for me! Thanks Cissa!

Now it is time for my report on the Juki TL2010Q mechanical sewing machine!

This is a bare bones mechanical sewing machine. It sews forward and it sews backwards. That's it. No no fancy stitches, not even a zigzag. And no computer! So why would anyone want a machine like this? Because it is a solid mechanical machine that is all metal. It is a real work horse and has a reputation for quality machine piecing and quilting. The stitch quality is supposed to be excellent!

Before testing the machine I read loads of reviews, one of which was written by Rebecca of Making  Rebecca Lynne. You can read it here. It was very helpful in making my decision to test this machine.

The harp space is 9" wide whereas my Janome is 11" but the harp on the Juki it is taller. I didn't test a large quilt on this machine but I expect that the height may compensate for the width.

The bobbins are metal. Filling them is easy and FAST - lightning fast! I would spend ages on my Janome 7700 filling bobbins (especially if I use fine threads like Superior's The Bottom Line)  but the Juki requires only seconds to load a bobbin!

The bobbins load in the casing under the machine but my Janome it top loading. On my Janome I can see how much thread is in my bobbin because there is a little window that allows me to see the bobbin but that isn't possible with the Juki. If I want to know how much thread I have in the bobbin I have to remove it and have a look. 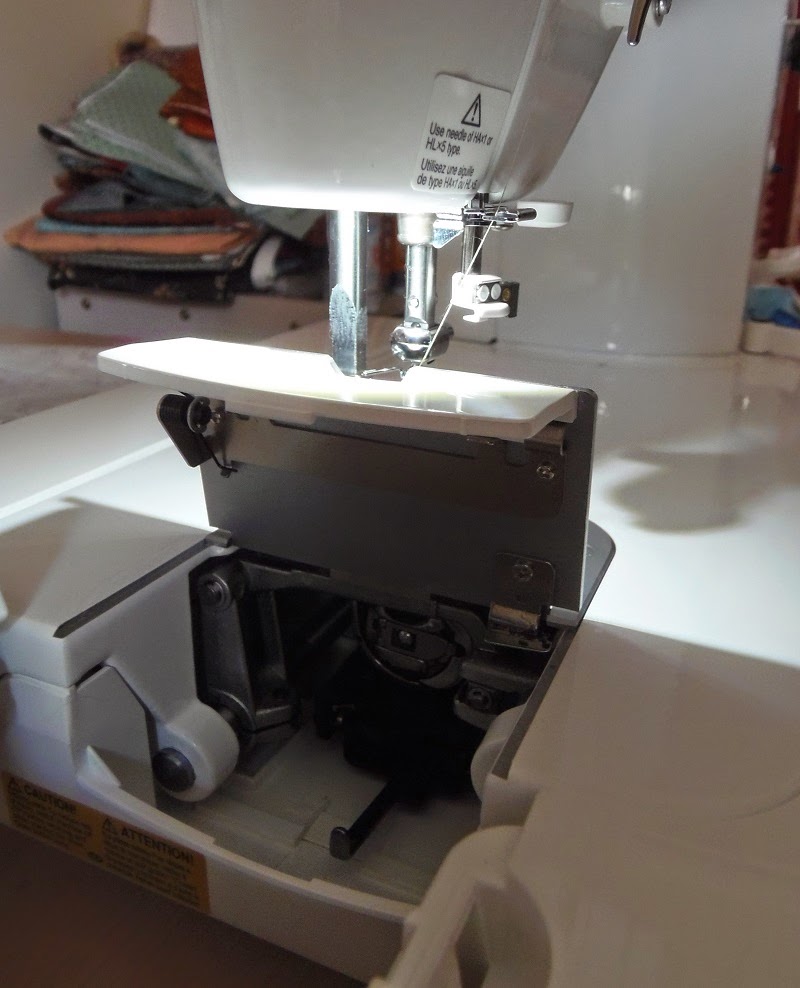 Changing feet on the Juki is accomplished by unscrewing a screw on the shaft. It is large and easy to get at. Love that! My Janome 7700 has a smaller screw and there is a bar which makes getting at the screw very difficult and I don't have big fingers! 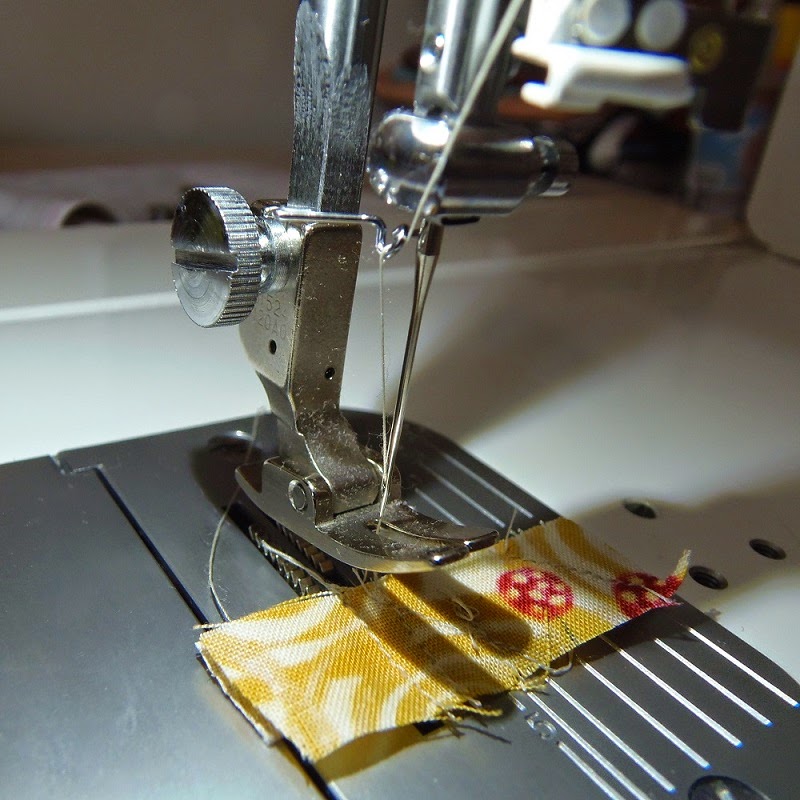 The Juki 1/4" foot doesn't have any markings (1/4" in front of and behind the needle). I use these marks when I want to start or stop sewing 1/4" away from an edge. I would just use a Sharpie to make those marks on the Juki foot. There is no blade on the Juki foot. You just line up the right side of the foot with the raw edges and you have an accurate 1/4" seam. I compared my seam allowance using the Juki foot and the Janome foot with the blade and the results were identical.

All of controls are on the front of the machine. You don't need need a manual to figure them out! 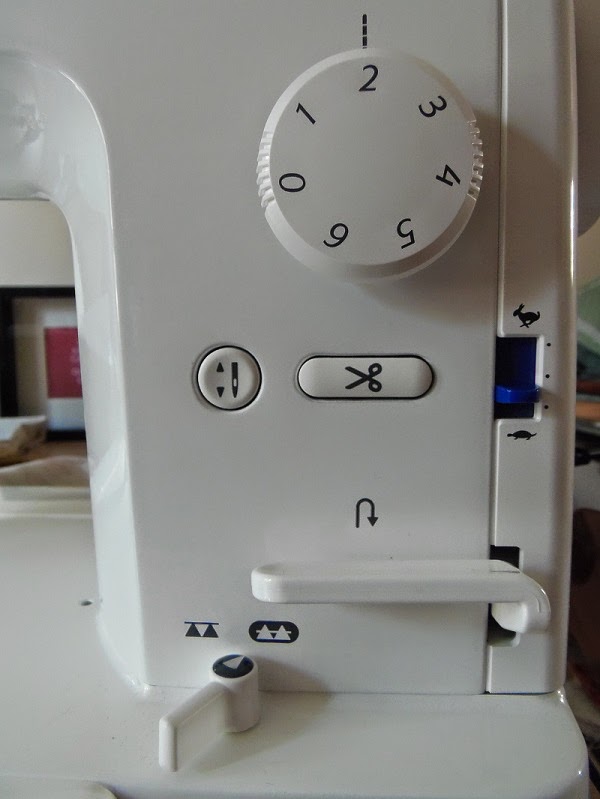 The stitch length is adjusted manually with the large dial at the top. When I turn off my Janome 7700 reverts to all of the presets including length but that doesn't happen with the Juki because it isn't computerized. This means each time I turn my machine the settings from my last session are still set.

Immediately below the stitch length dial you will find the needle up/down button (on the left). For me this is a must have!

The thread cutter (in the middle). The Juki has a second thread cutter on the foot pedal. Just press your heel down to engage the thread cutter. Have to be careful here as I inadvertently cut my thread when I stopped sewing!

The speed control on the right ranges from a tortoise to a hare, a really fast hare! You adjust the speed with a simple slide control. At the tortoise speed it is slow. At its fastest, the hare, it is much faster than my Janome 7700 and can stitch a mind boggling 1500 stitches per minute! I found I was most comfortable at the mid point between the two.

Closer to the base is a large lever which is the back stitch function and at the bottom left is a lever for feed dogs up/down.

The Juki requires lubricating with machine oil in seven spots. All but one of these spots is on the outside of the machine. The seventh spot is inside the hook in the bobbin case. The manual recommends oiling every day (one or two drops at each location). If it isn't used for a prolonged period of time the recommendation is 5 to 7 drops at each location.

Cleaning the feed dogs and hook components is very much the same as my Janome. The throat plate is removed and a little brush is used to clean out the dust. However the Juki also has to be tilted so that one can access a plate under the machine. It has to be opened so that the hook components can be cleaned. This could be challenging and may be a drawback because the machine is heavy.

Threading the machine is very intuitive although it is a little different. You only need to thread it once or twice to have it down pat! 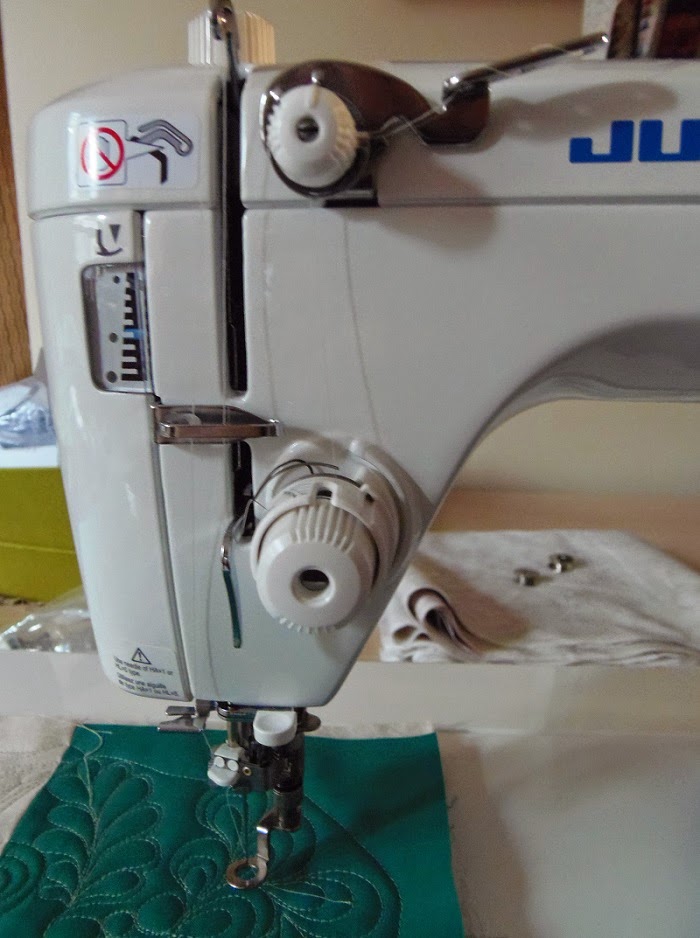 One of the interesting features was the thread guide (the bar at the top right). The manual states that when using a thread such as nylon which easily slips out of the thread path you can thread this guide in different ways to avoid that problem. 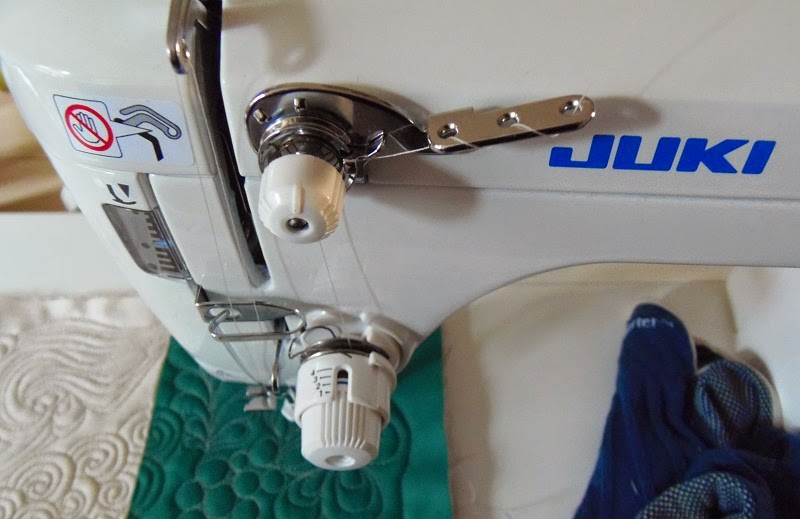 I tested a wide variety of threads using the FMQ feet. Only one of the threads broke at a high speed. The machine has a thread guide so I followed the instructions and changed how the thread when through the thread guide and the problem was solved. The stitch quality was gorgeous. 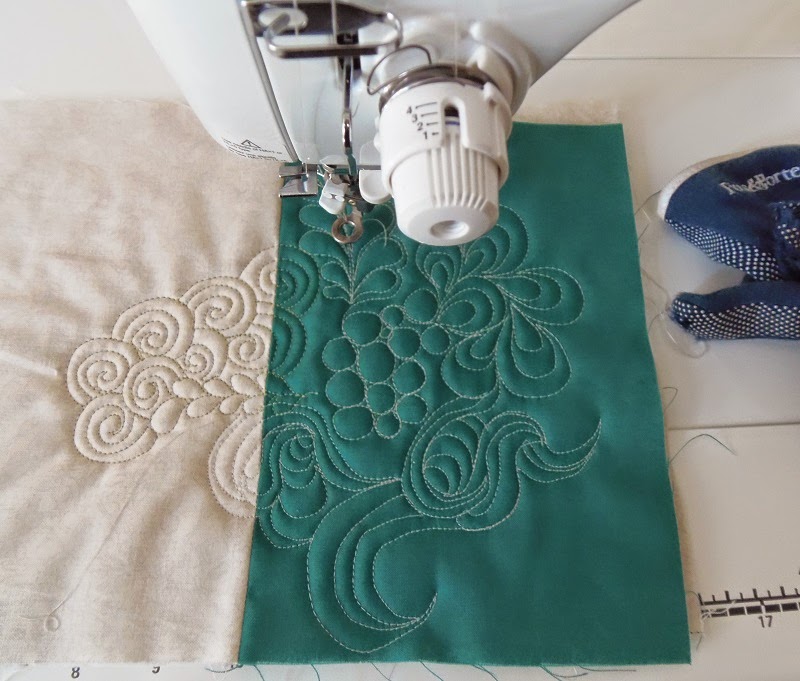 I tested several different types of quilt sandwiches some which were spray based and some that were not. Again, there were no problems! I had a quilt that was spray basted and the top was fused. It was quilt stiff with all the adhesives and the Juki quilted it like a hot knife through butter! I also did a little patchwork piecing and the stitches were beautiful and the fabric fed without any problem at all!

The machine comes with a walking foot. I had ready reports that it is noisy and while it does make noise I didn't find it overly noisy bearing in mind that this is an all metal machine. I expect some noise!

There is one bright light which I assume is an LED but I couldn't find anything in the manual about it. My Janome has 5 LEDs but I think the Juki has a single LED light is as bright if not brighter than the Janome.

The Juki comes with a knee lift lever that can be used to raise and lower the pressure foot. I don't use a knee lift as I find that after a while it makes my knee and hip ache so this isn't a selling point. It also comes with an extension table. I'm not a huge fan of extension tables; I would prefer that my machine was flush with the table so for me the extension isn't a selling point. However it is easy to install and it provides a good sized working surface.

My overall impression is that the Juki TL2010Q is a solid, hard working sewing machine with a quality stitch and it is good value for dollars spend.  It won't replace my Janome 7700 but it definitely has a place when it comes to piecing and machine quilting!

So what is a girl to do? Well this girl took the Juki TL2010Q home with her and that's exactly what I did. I'll have to order an insert so I can set the machine into my table so that it is flush with the sewing surface. Until I have it I'll just practice on smaller pieces with the extension table.

Until I post again, happy sewing!
Karen H
Posted by Karen H at 6:30 AM