Basting hexagons from the back and removing papers

One of the quilt makers who is working on the Value Proposition Hexagon Quilt Along asked a question about basting hexagons. She noticed that sometimes threads appear on the front of the hexagon and sometimes they don't and wondered why this is so. There are two methods of basting hexagons. I mentioned this in my August 4, 2014 post and offered to do a tutorial.

In the upper set of hexagons in the picture below the fabric is basted to the paper so the threads show on the right side of the hexagon. In the second set of hexagons the basting is only through the fabric so no thread shows on the front. 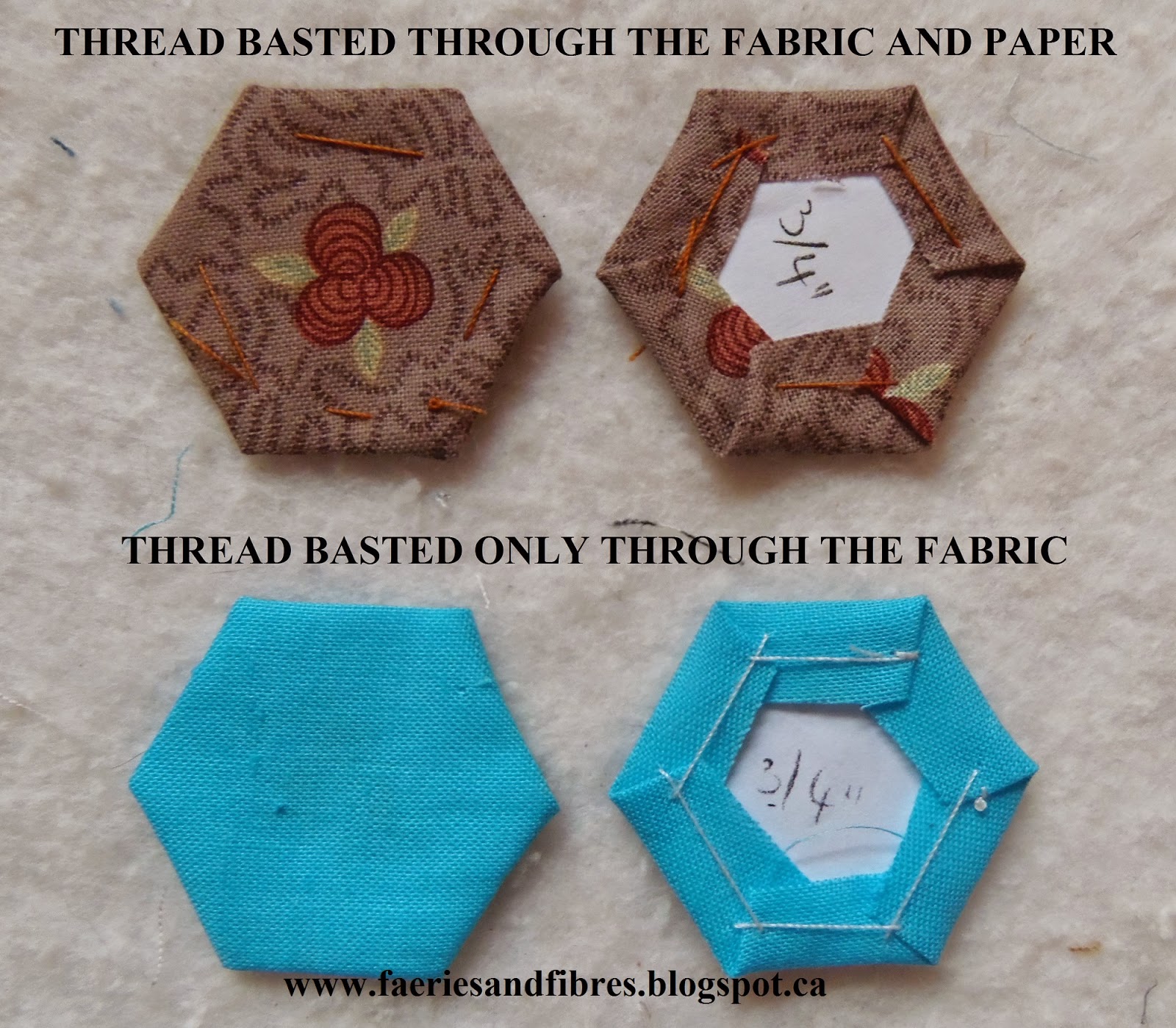 I use both methods and like them for different reasons. When the basting goes through the paper I know that there is a paper in the quilt top if I see thread on the right side of the quilt and this is important because if you don't get the papers out you may find a paper stuck in the quilt when quilting time arrives! I like the other method where the basting does not touch the paper so they aren't damaged which means I can get multiple uses out of each paper. In addition the basting stays in the quilt and holds the seam allowances down. This can be important if the quilt top is going to be handled a great deal as it is stitched together.

I had offered to do a quick tutorial on basting so that the threads don't show on the front and today is the day I deliver that tutorial! To start I like to use a tiny dab of glue to tack my paper hexagon to my fabric. I don't worry about precise seam allowances. As long as it is 1/4" or more I'll be fine. To begin I fold over the top seam allowance and then I fold over the left seam allowance. With a knotted thread I place my needle through the fabric to the right of the fold and come up on the other side of the fold. I take a one more stitch so that the fold is tacked down. 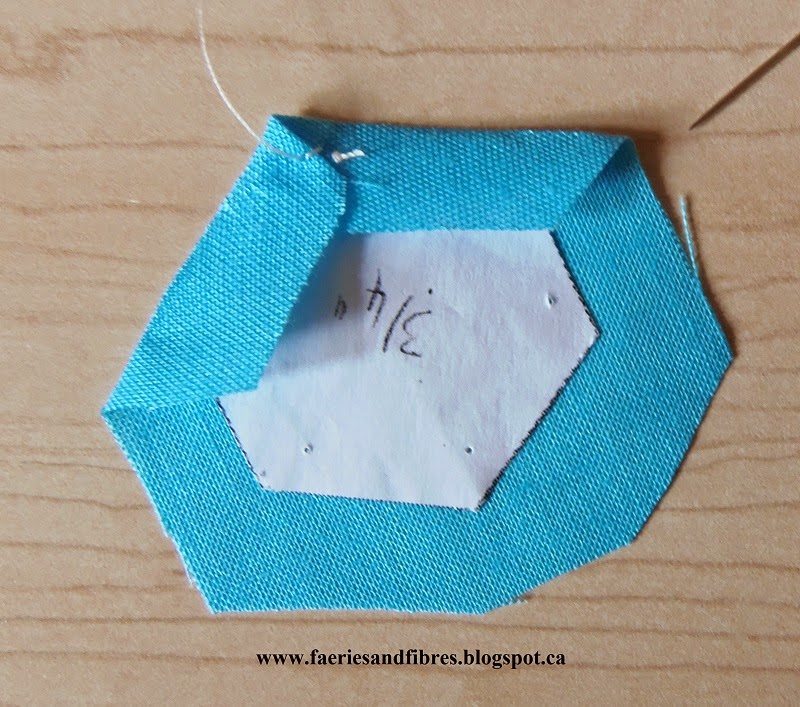 I turn the hexagon counterclockwise, fold over the next seam allowance and tuck it under. I take a stitch as indicated in the following picture. 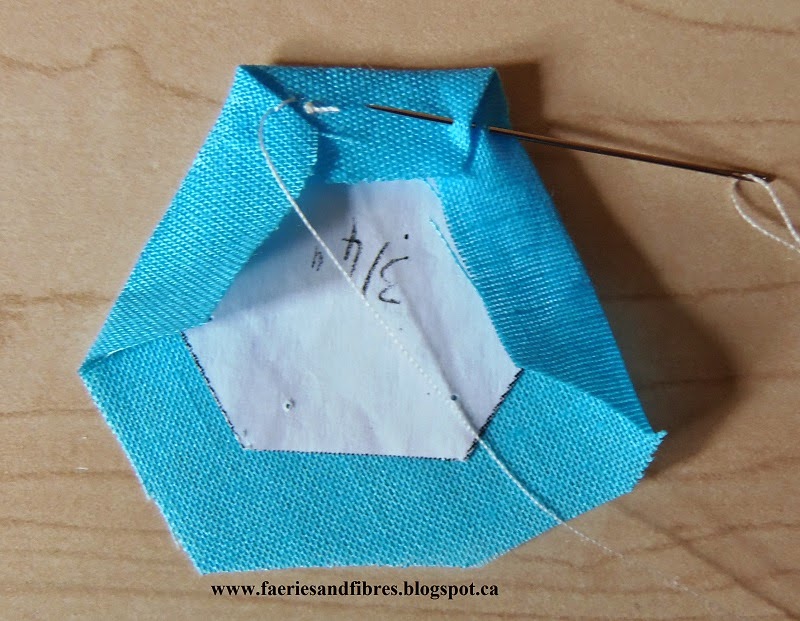 I draw up my thread and the fold will be tacked down. 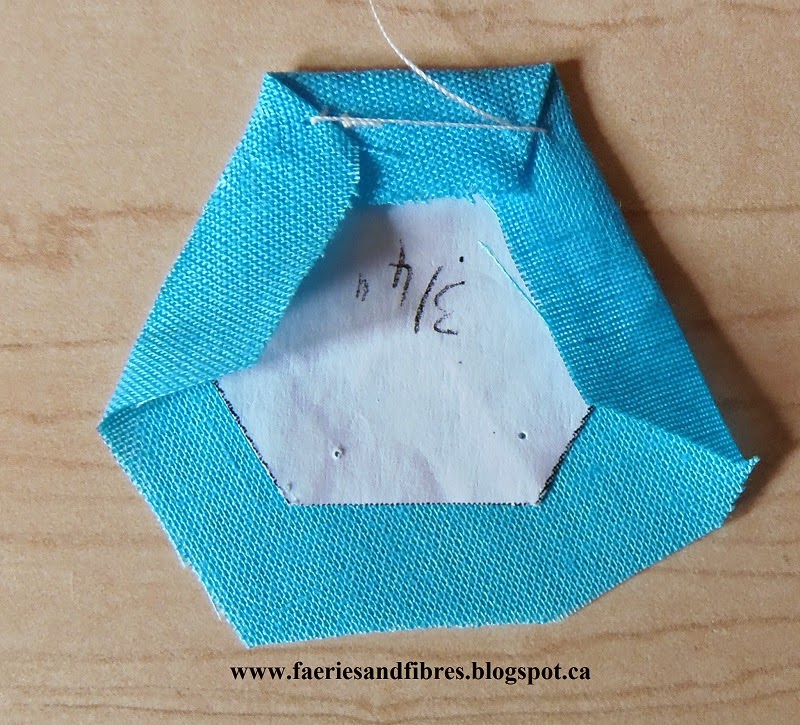 I turn the hexagon counterclockwise, fold the seam allowance, tuck it under and take a stitch to hold the fold down. 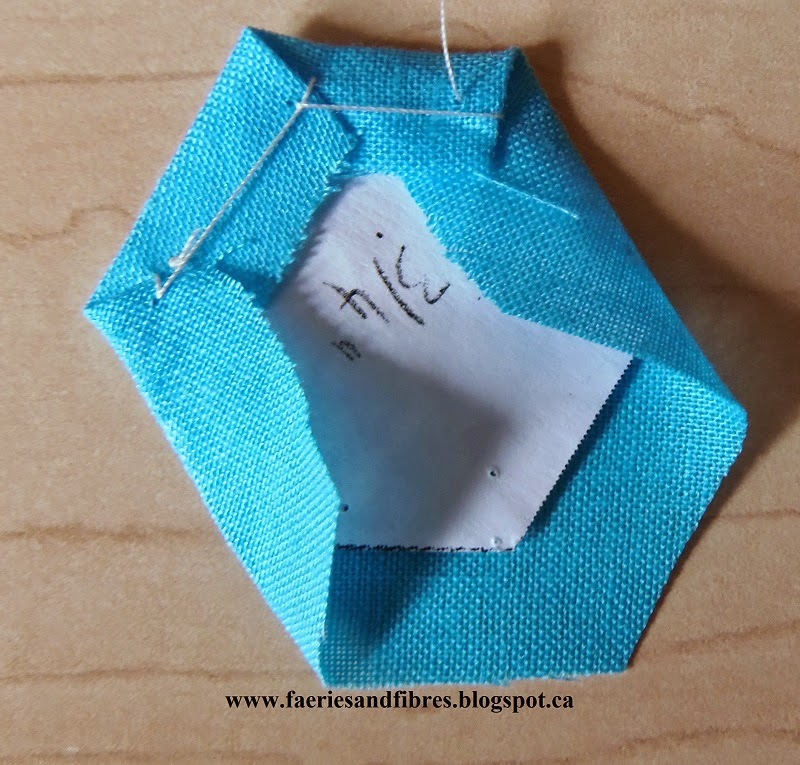 I continue in this manner until I get to the last seam allowance. I fold it, tuck it under and take a stitch to hold the fold down. 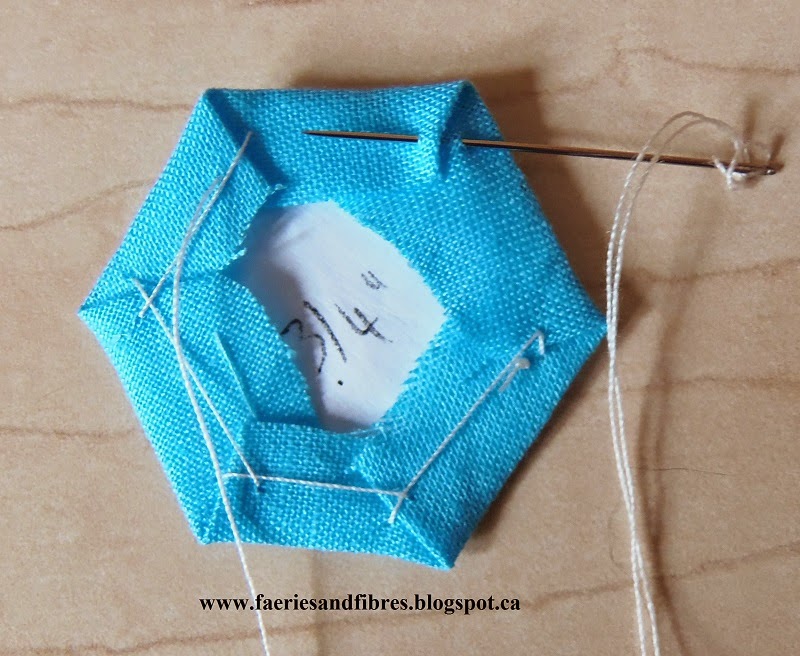 I take two more stitches in the same place and clip my thread. Notice that the edge on the top right doesn't have thread that carries over to the beginning point. I like to leave it this way because it makes the removal of paper much easier. 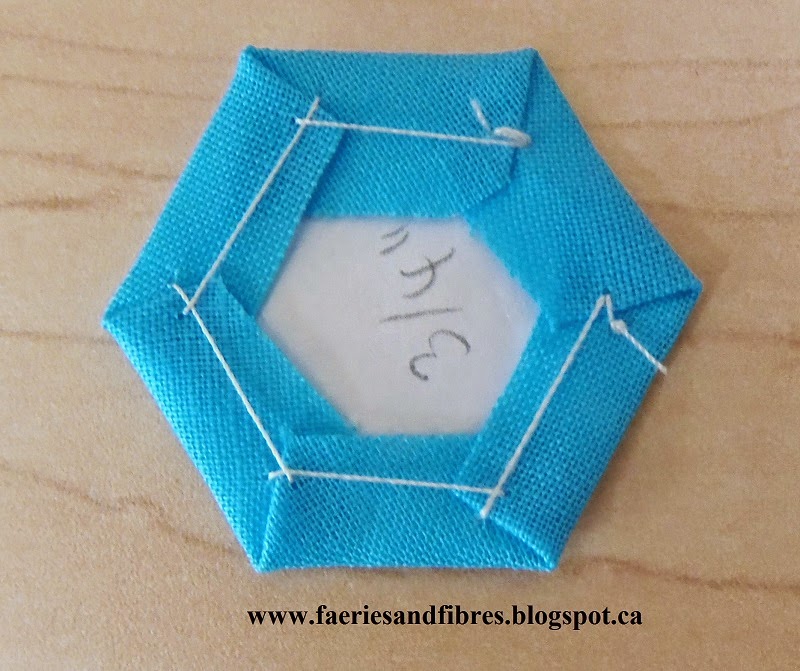 HELPFUL TIP #2: I like to use inexpensive serger thread for basting. I can get giant cones for only a dollar or two and they last for a very long time!

When I use this method of basting the papers can be removed at any point however I prefer to leave them in place until the hexagon is completely surrounded by hexagons. In the picture below you can see that the yellow hexagon is entirely surrounded by hexagons.  I use a crochet hook to remove the paper.You can see the tip of the crochet hook on the right just between the start and stop points of the basting. 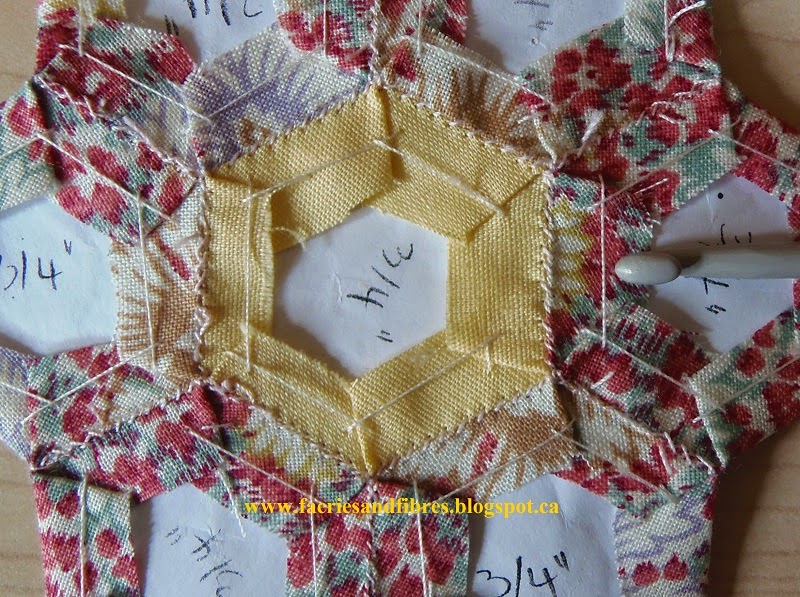 I slide the crochet hook between the paper and the fabric at the edge that is between the starting point of my basting and the finishing point. I lift the hook and the paper is released. I can now grab the paper with my fingers and pull it out. 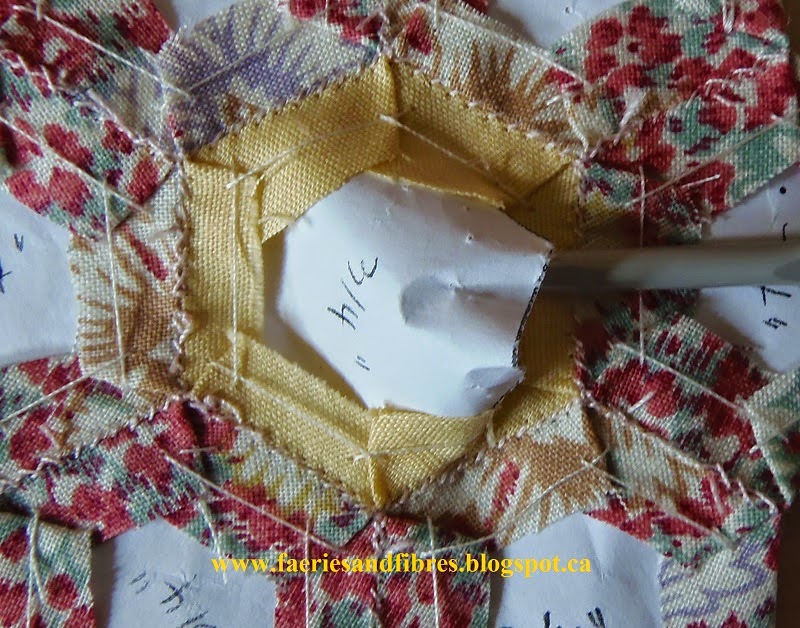 The paper is starting to get a little ratty  so it might just have reached its life expectancy although I think I might be able to squeeze just one more use out of it! It has already been used a few times so it really doesn't ow me anything! 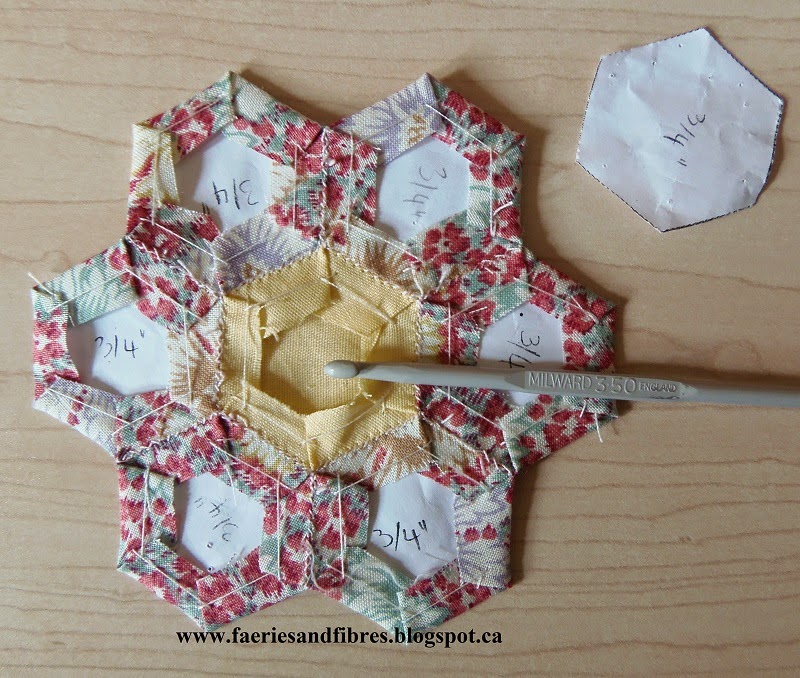 I hope this tutorial has been helpful and informative! Until I post again, happy basting!
Karen H
Posted by Karen H at 6:00 AM