Tomorrow is the launch of my Soupçon Hexagon Quilt Along (QAL) and you will have an opportunity to try fussy cutting and piecing. I know that hexagons and fussy cutting aren't everyone's cup of tea but there will only be a little bit of both in Soupçon. To quote a John Lennon song, all I am saying is give piece(ing with fussy cuts) a chance!

Fussy cuts are great for any block but they are particularly well suited to hexagons and diamonds.  I love to fussy cut to produce kaleidoscopic effects such as this one. 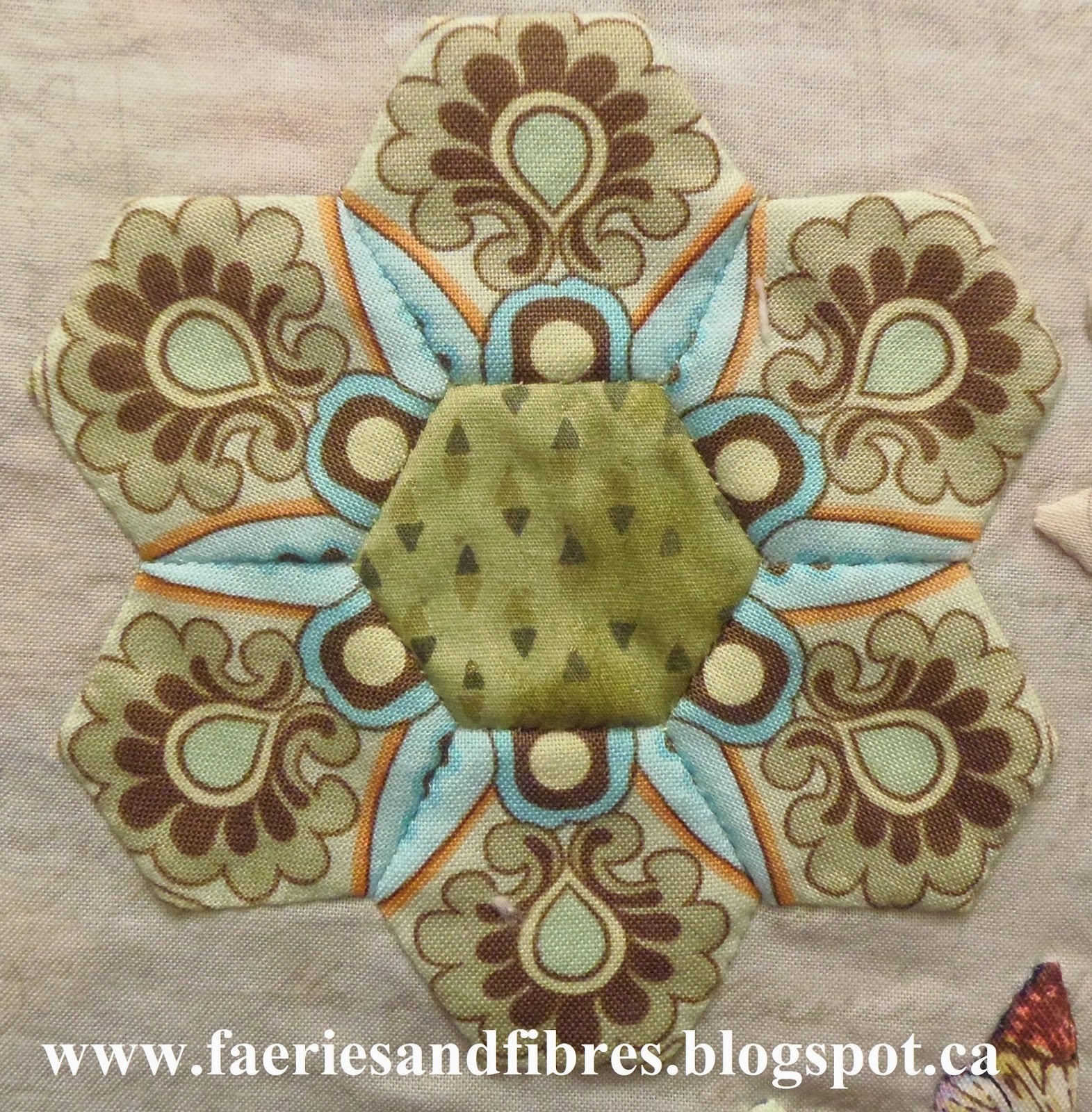 The hexagon above is six identical hexagons surrounding a seventh different hexagon. I love the blue star that emerged. I cut this hexagon from a strip of fabric that was part of a jelly roll.

Sometimes I can only cut three hexagons from my fabric. What's the solution? Add a second fabric! In the two examples below I only had enough fabric to be able to cut three hexagons for each so I added a second fabric for the outside ring and a third fabric for the center. In the pink hexagon the alternating white and red hexagons were not fussy cut, nor was the center hexagon. 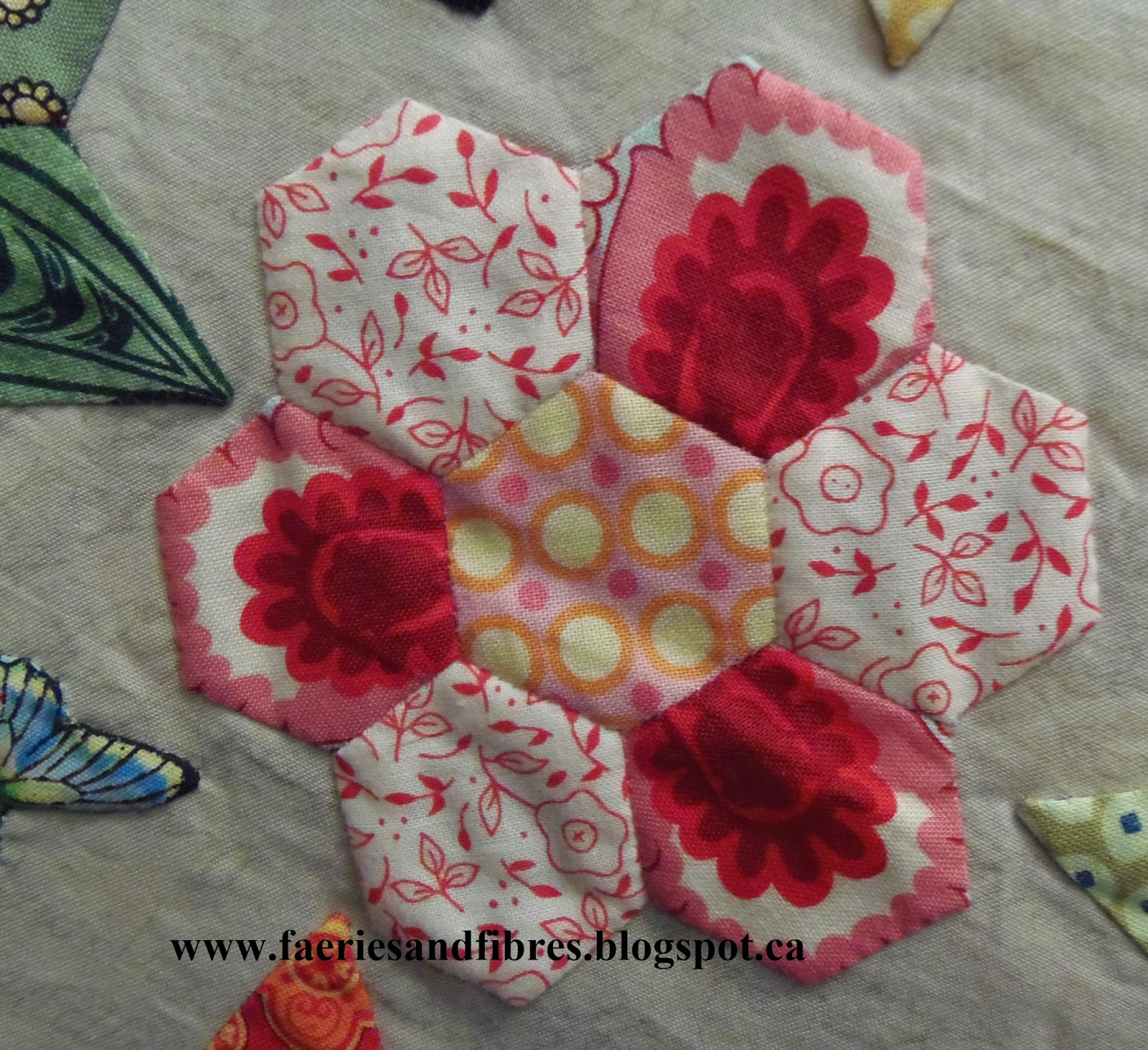 In this example I only had enough pale blue brown for three hexagons so I fussy cut three blue and yellow to go with them. The center was also fussy cut. 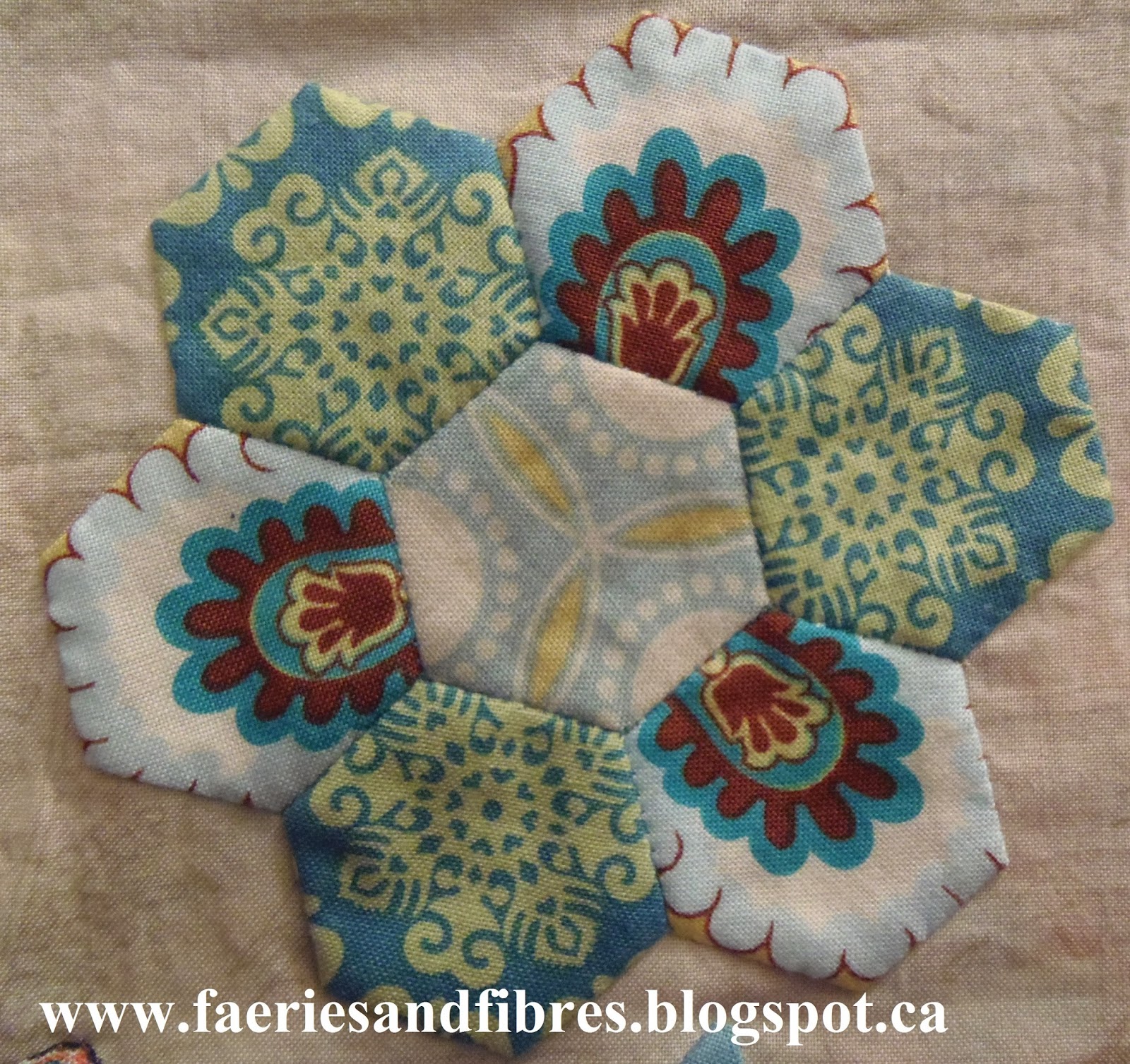 Another way to deal with a shortage of fabric is to use two different fussy cuts from the same fabric; if your aren't confident working with multiple fabrics and colour make cut your fussy cuts from a single fabric. That way you know that they will work together. In the star below I did have enough fabric but I wanted some variety so I fussy cut three diamonds with blueberries and three diamonds with red flowers. The colours work together since they come from the same fabric and the two different fussy cuts add some interest. A diamond is a derivative of a hexagon (three diamonds make a hexagon). 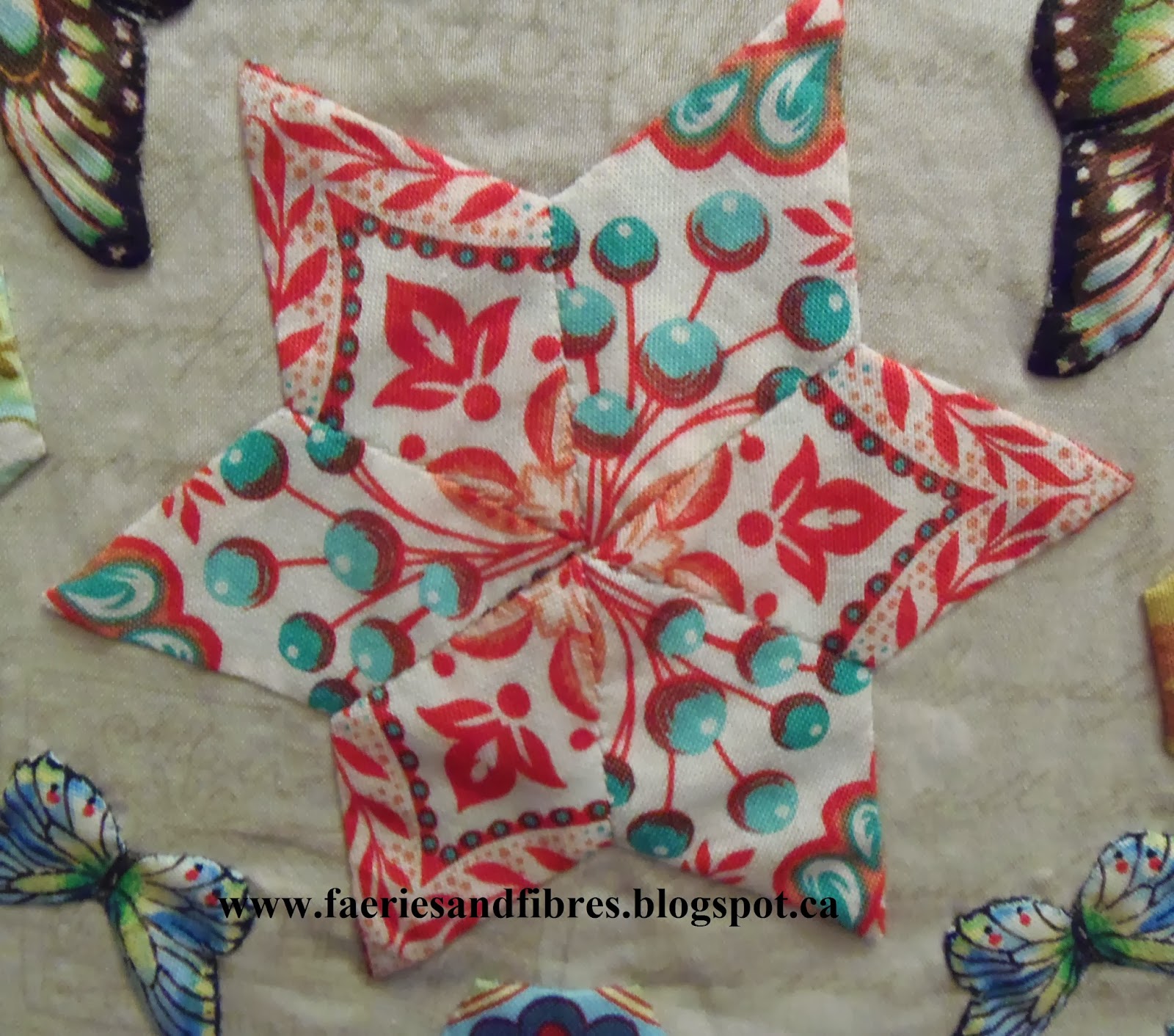 This is a second example of six patches cut from a single fabric. I cut three with red flowers and three with white leafs. 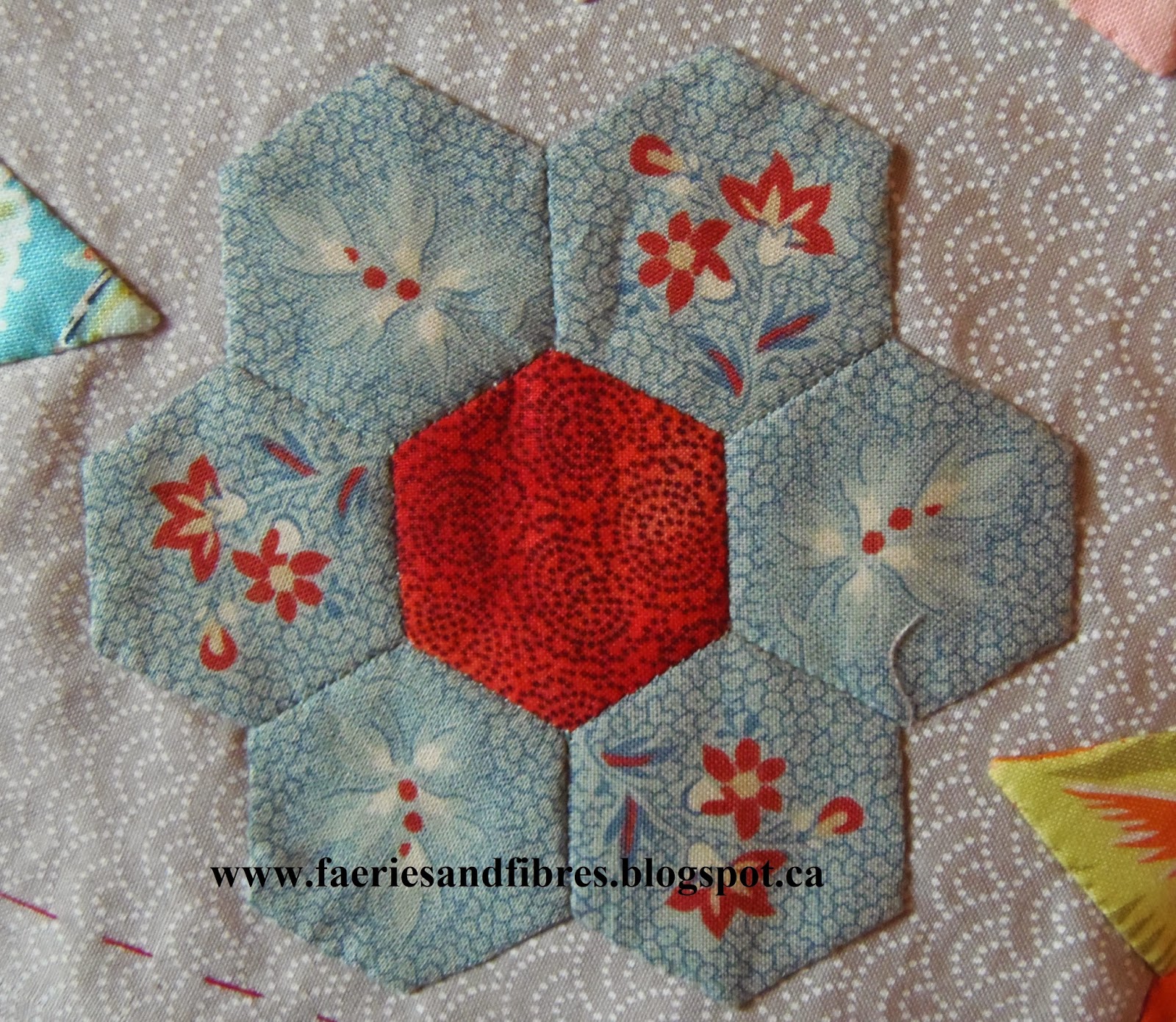 Here I've used two different fabrics. The colours are close but not the same and they don't have to be a perfect match. In fact sometimes it is more interesting if the colours are slightly off. 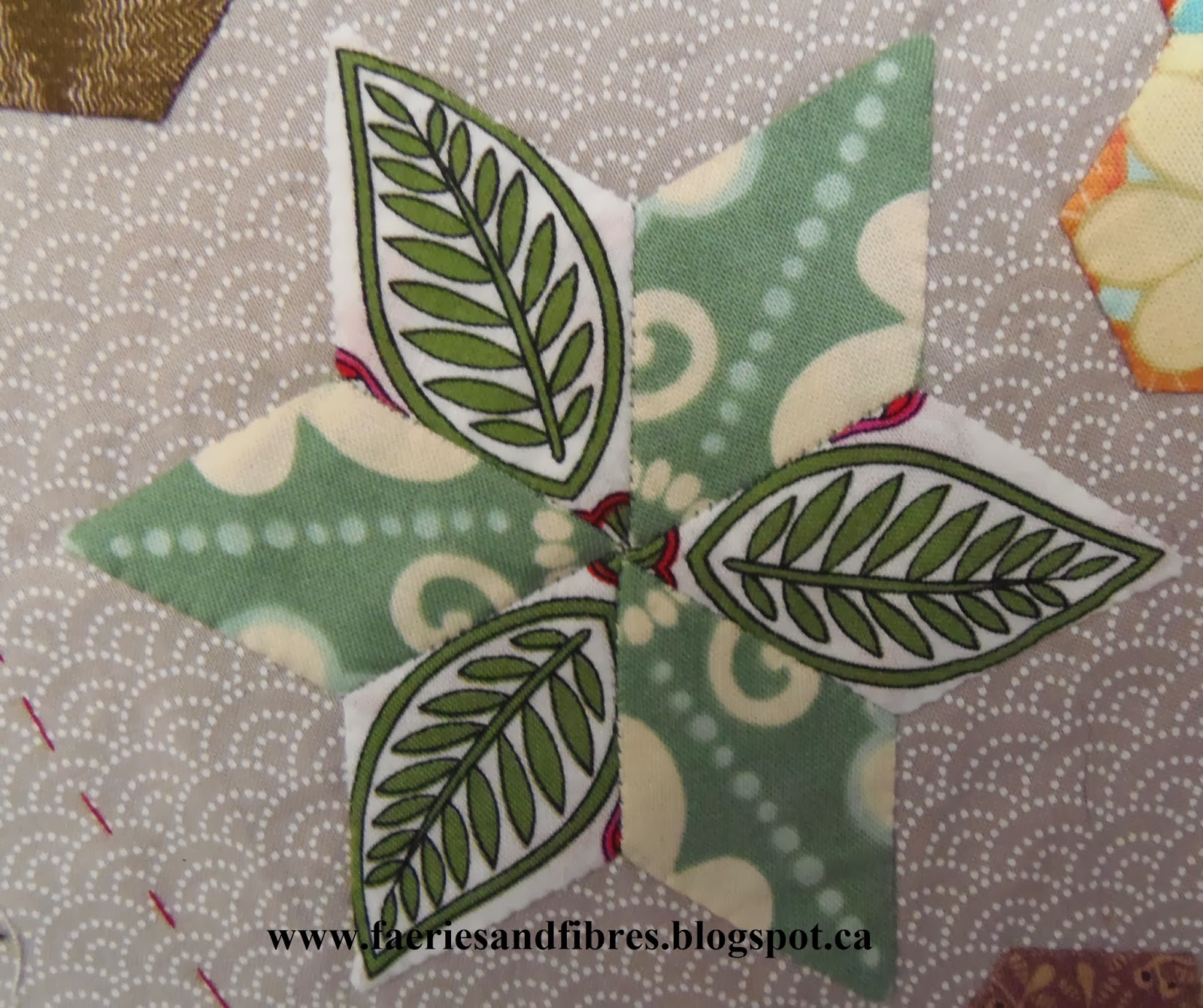 Here I only had enough blue to fussy cut three so I alternated with a red print which was not fussy cut. Even with only three fussy cuts it is still interesting. This star isn't a bobby dazzler but it would work in the Soupçon Quilt Along because it can be dressed up! 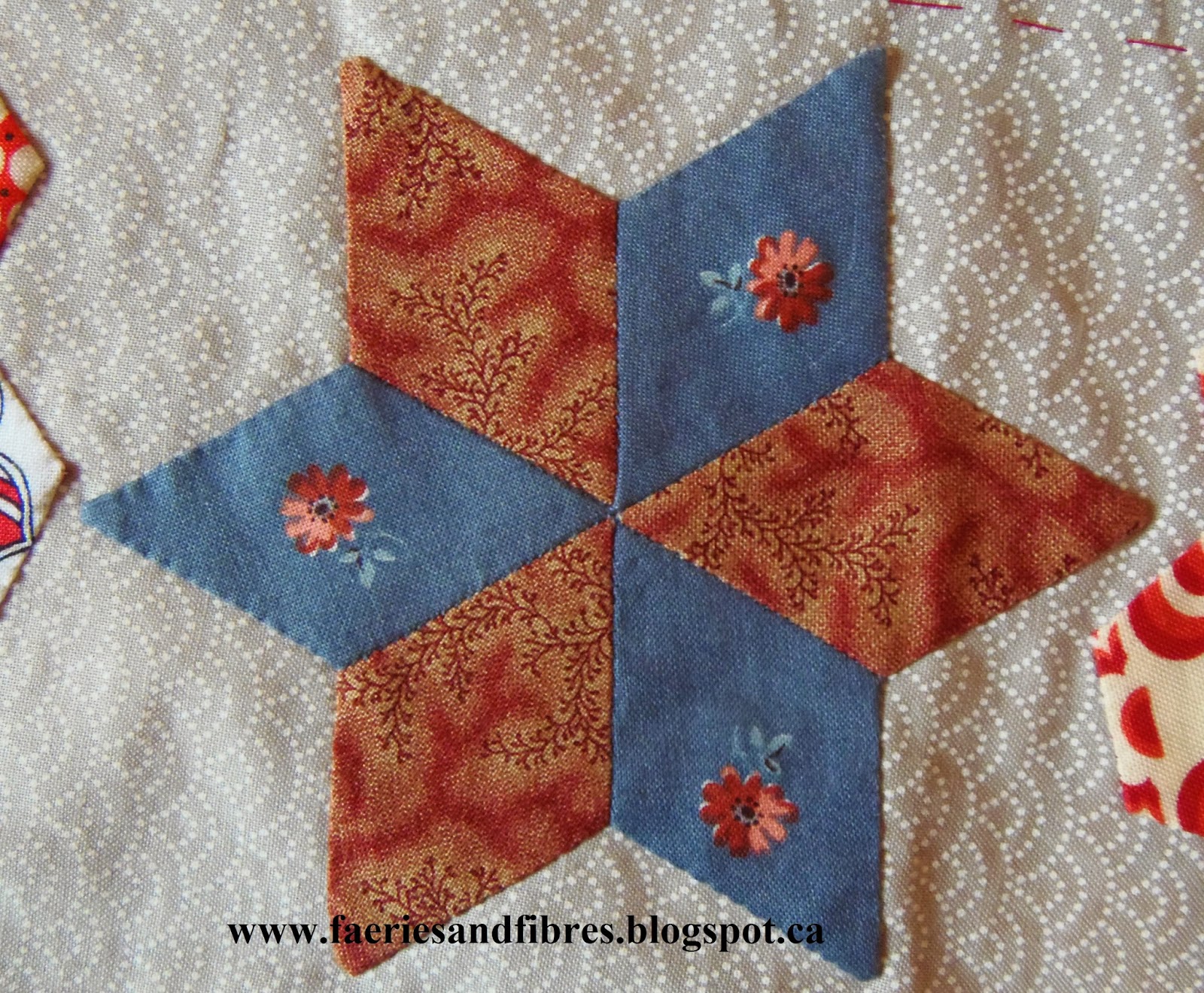 Again I fussy cut three hexagons (and a fourth and different for the center) and three plain hexagons. 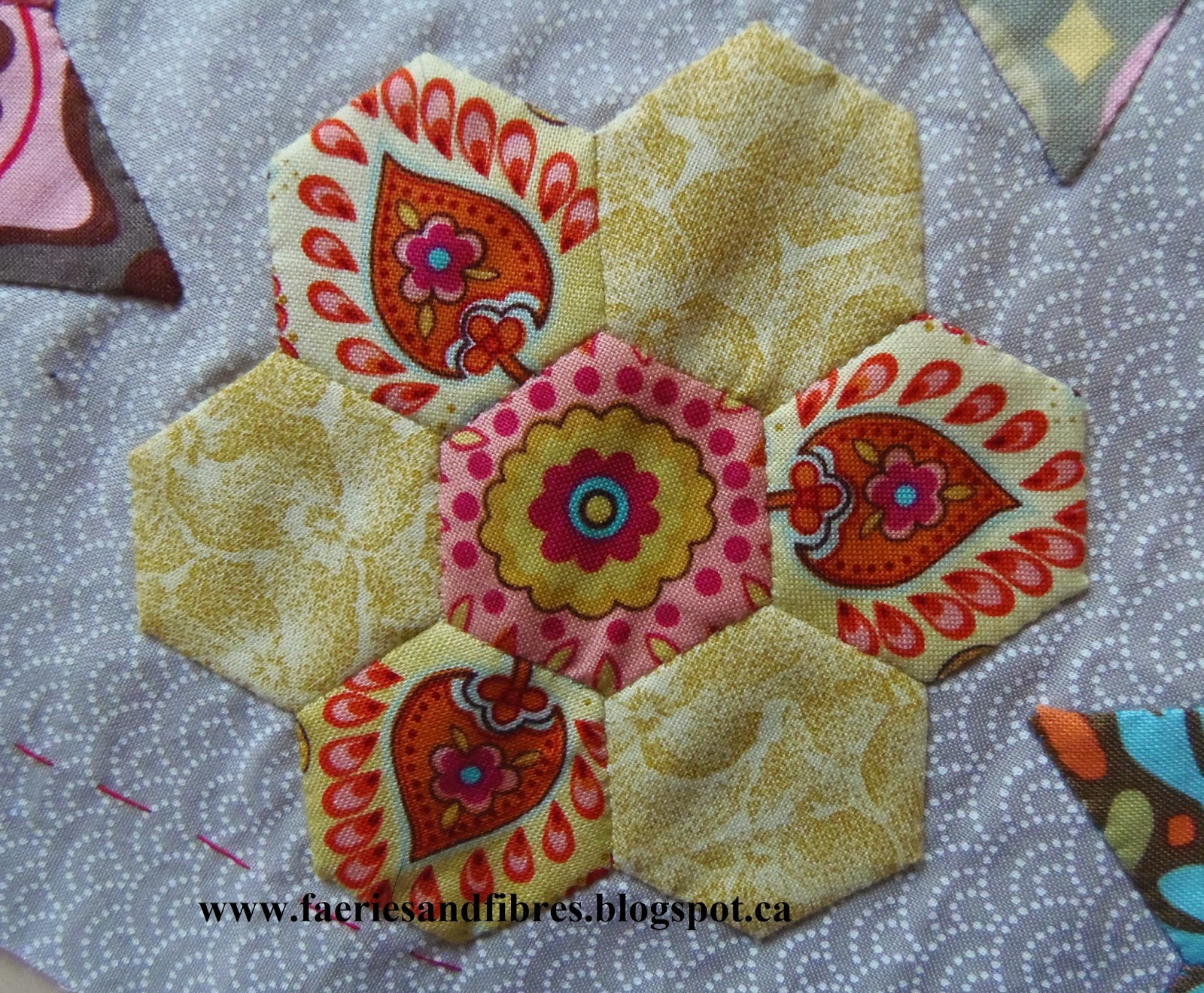 This is yet another example of combining entirely different fabrics. What is consistent in all three is that I've looked for complimentary prints/colours. The red print in the first picks up the red flowers on the blue. The yellow hexagons in the second pick up on the background of the fussy cut hexagons and in the one below the gold basket weave picks up on the gold in the fussy cut leafs. 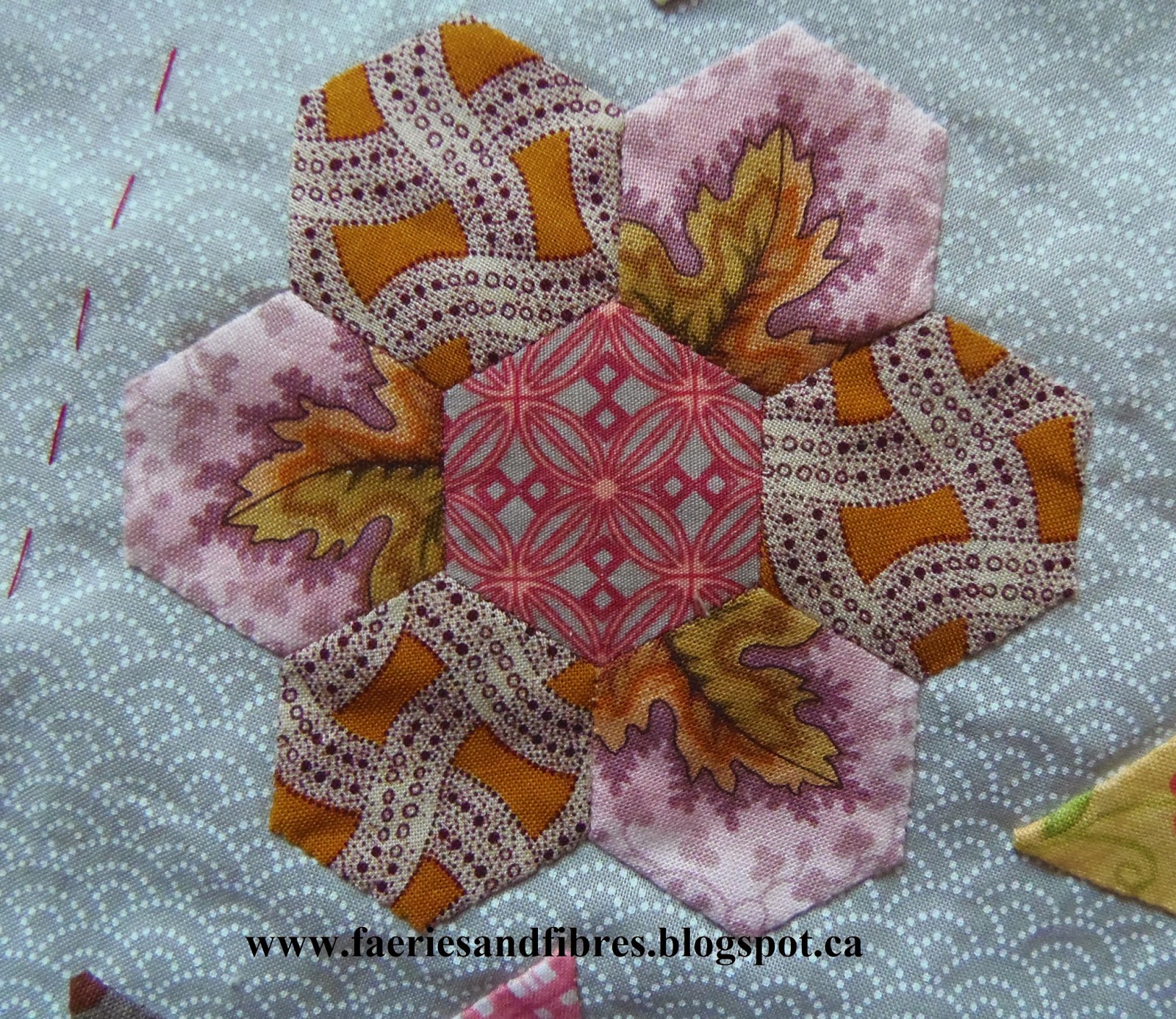 Experiment with your fabrics and see what you can come up with! Here are some examples of what I came up with. I LOVE the orange star with the striped fabric in the lower right corner! Stripes are our friend! 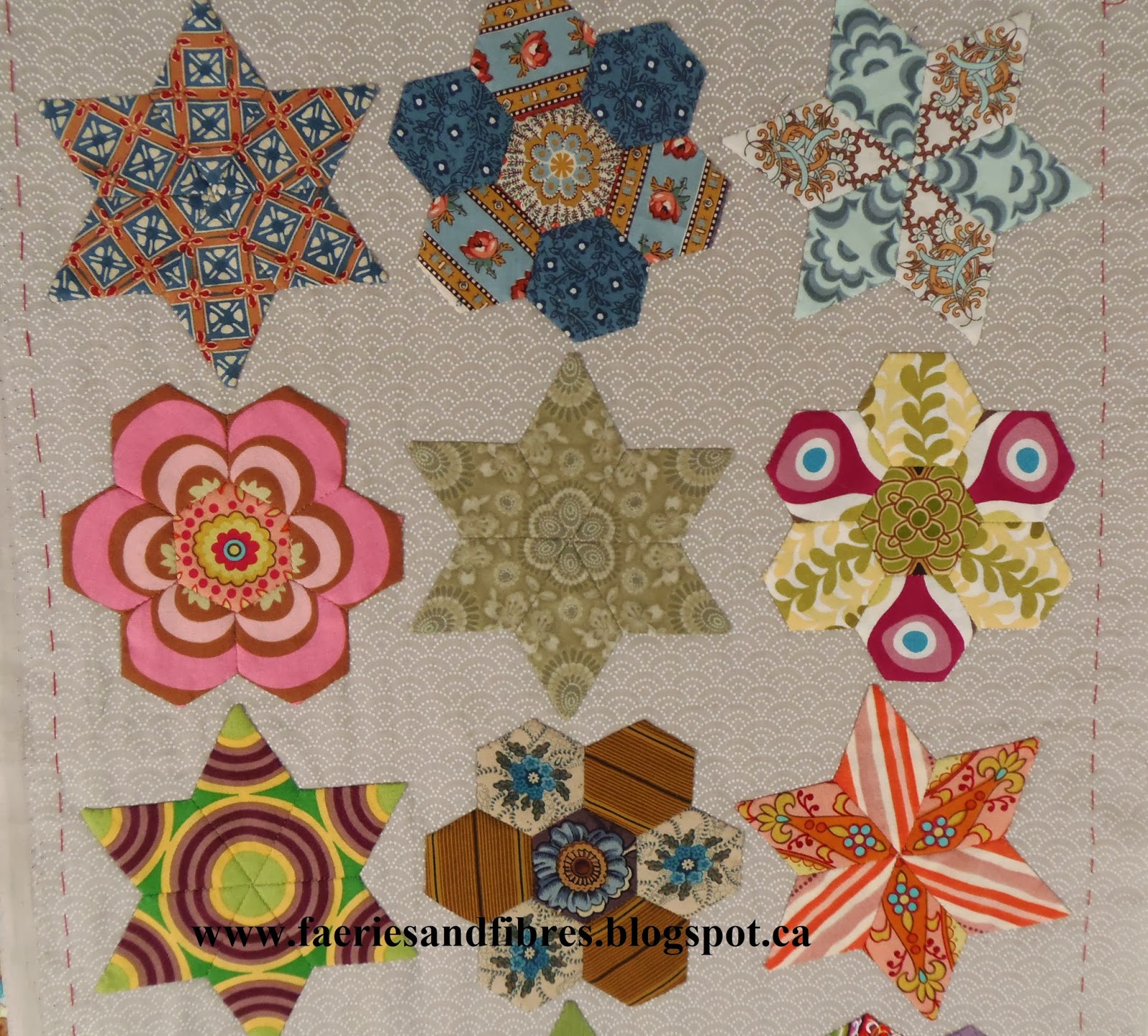 Lots of possibilities here! The star in the center of the bottom row features a fussy cut print and a fussy cut stripe. 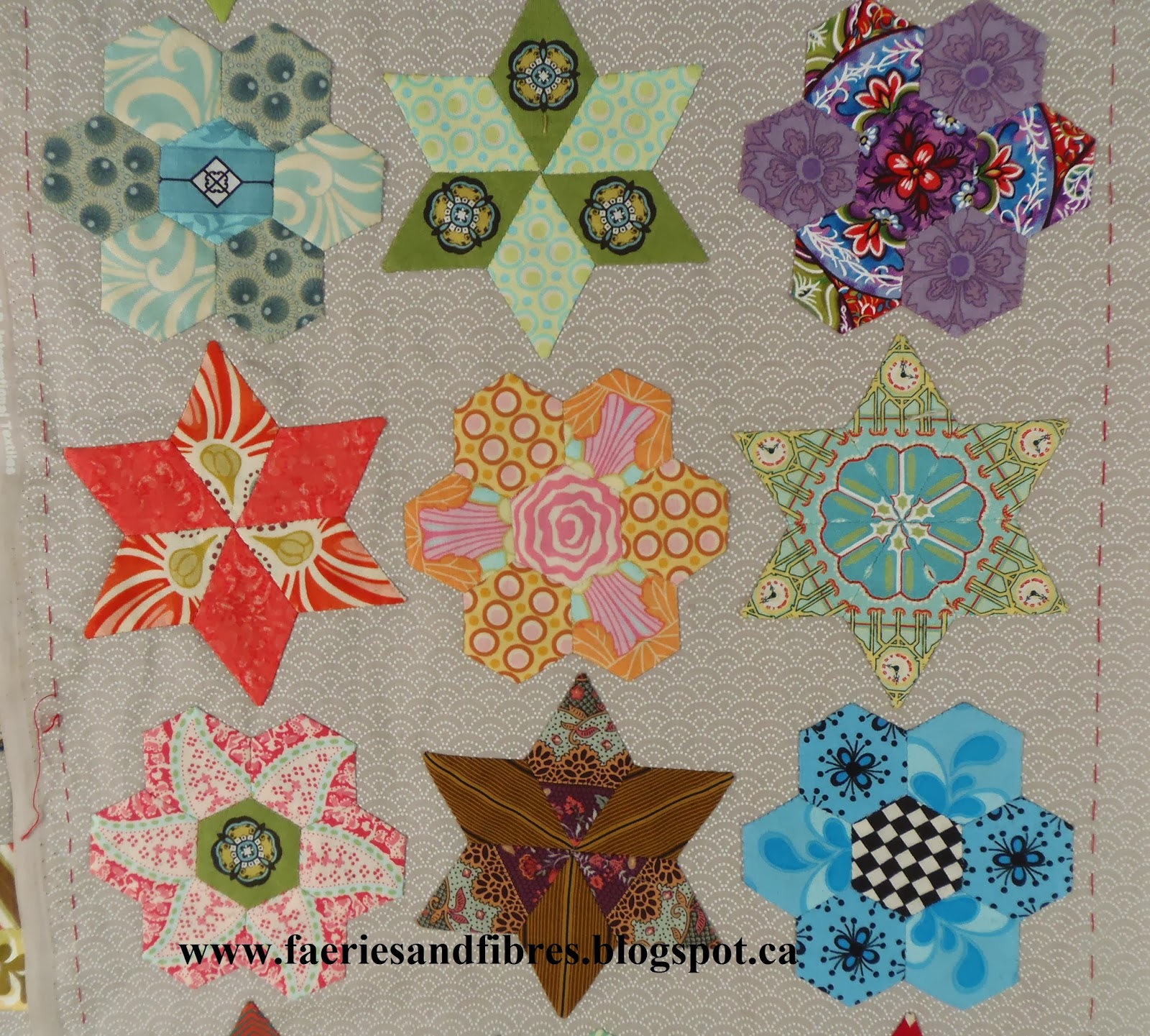 Look at how the striped fabric was used in the hexagon flower in the middle of the bottom row. Pretty, no? Pretty, yes!!!! 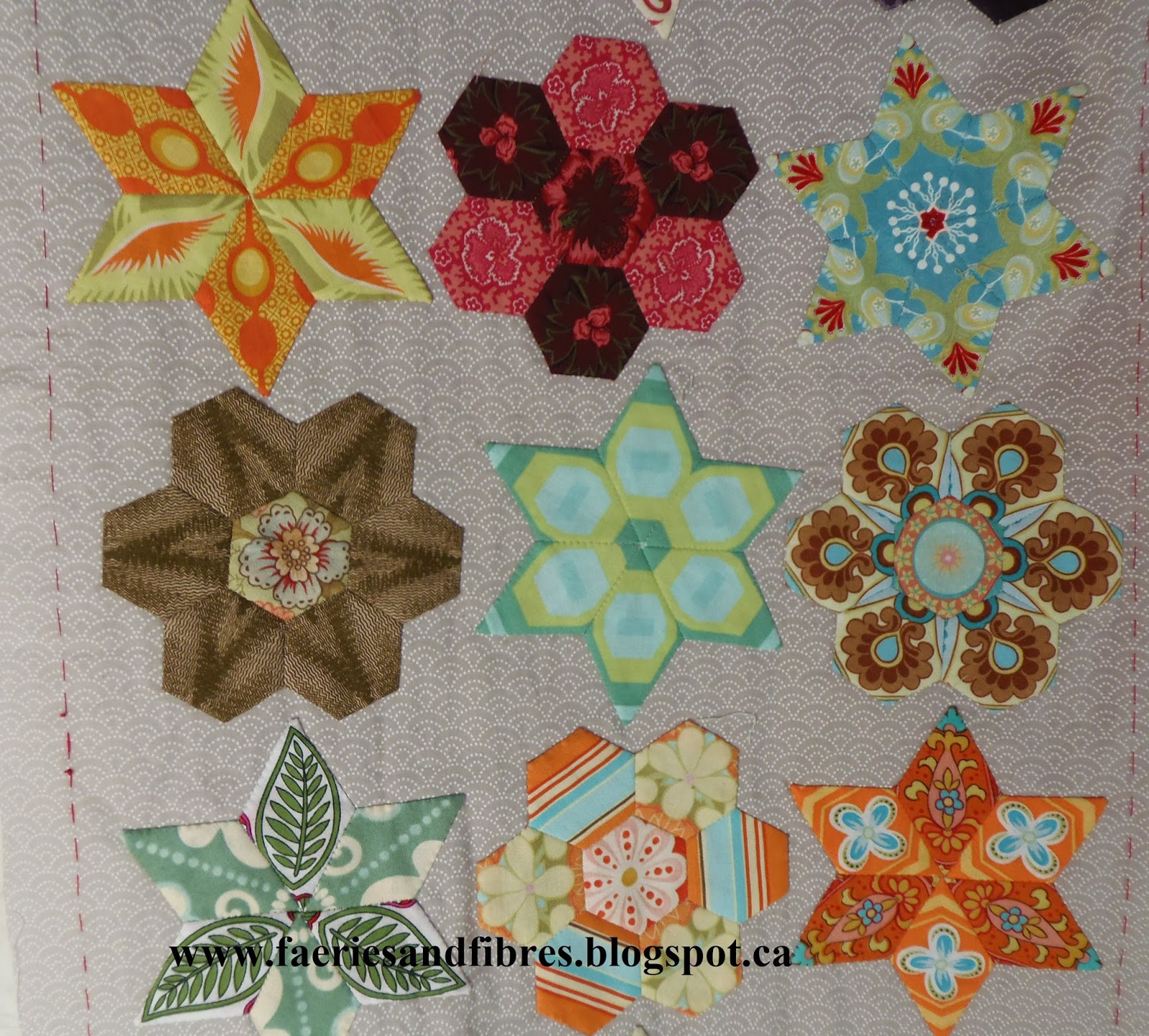 And here's one final idea. Sometimes the fabric is right but not quite right so how do you make it right? I took some pens to it! The triangular bits were very pale so I outlined them with my brown fabric markers. I still thought they needed some depth so I took another marker and I shaded the left side of the inside of blade on the light blue. And I am ashamed to say that it wasn't a fabric marker that I used but it was a permanent marker. Actually I'm not at all ashamed! I just did it and I like it! Feel free to alter your fabrics however you chose. 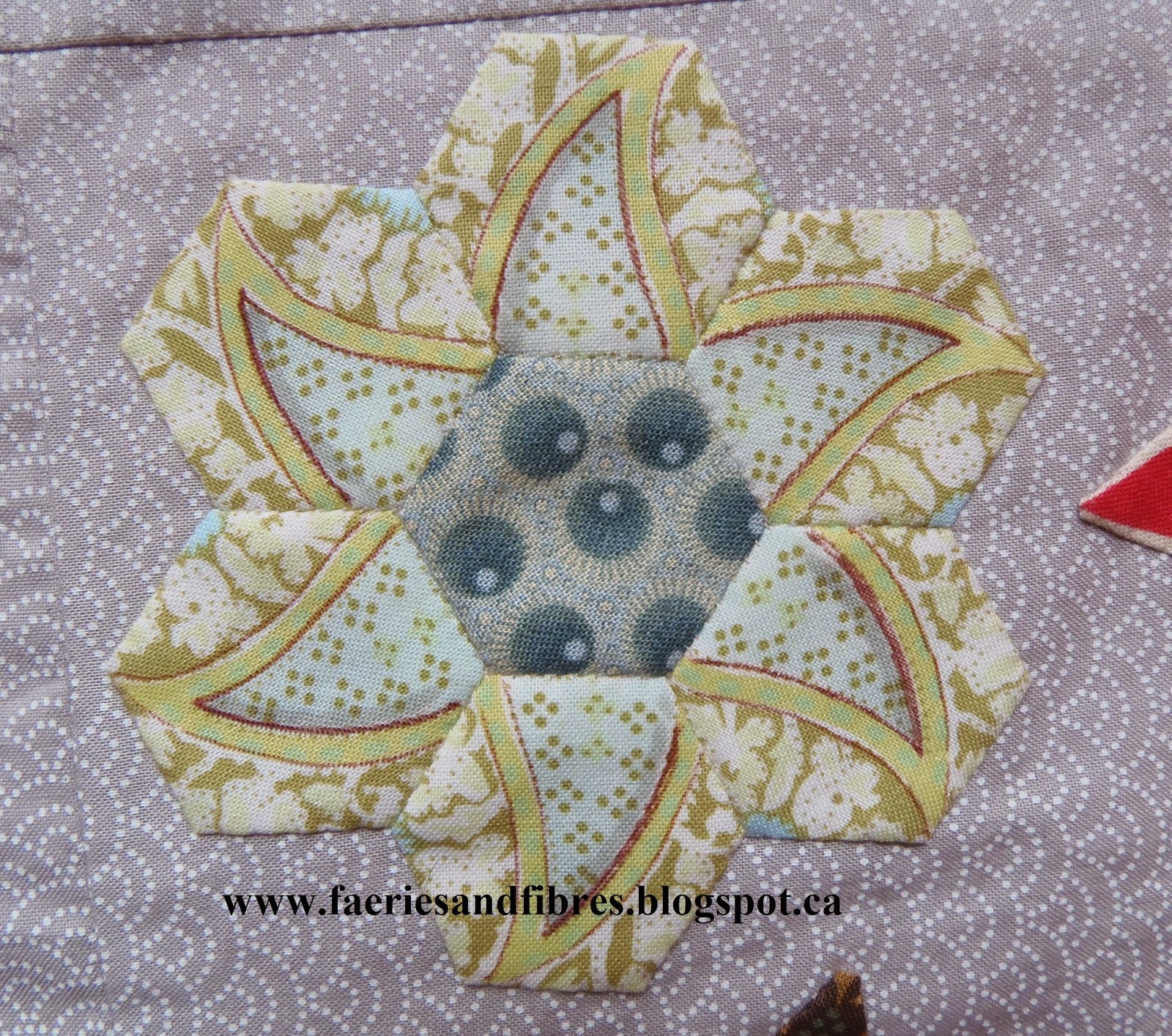 All of the hexagons and stars above are part of my quilt top 81 (The Giant Monstrosity). It is on my "to be quilted" list. It is a big quilt so it is going to be challenging. Oh well, I think I'm up for the challenge! 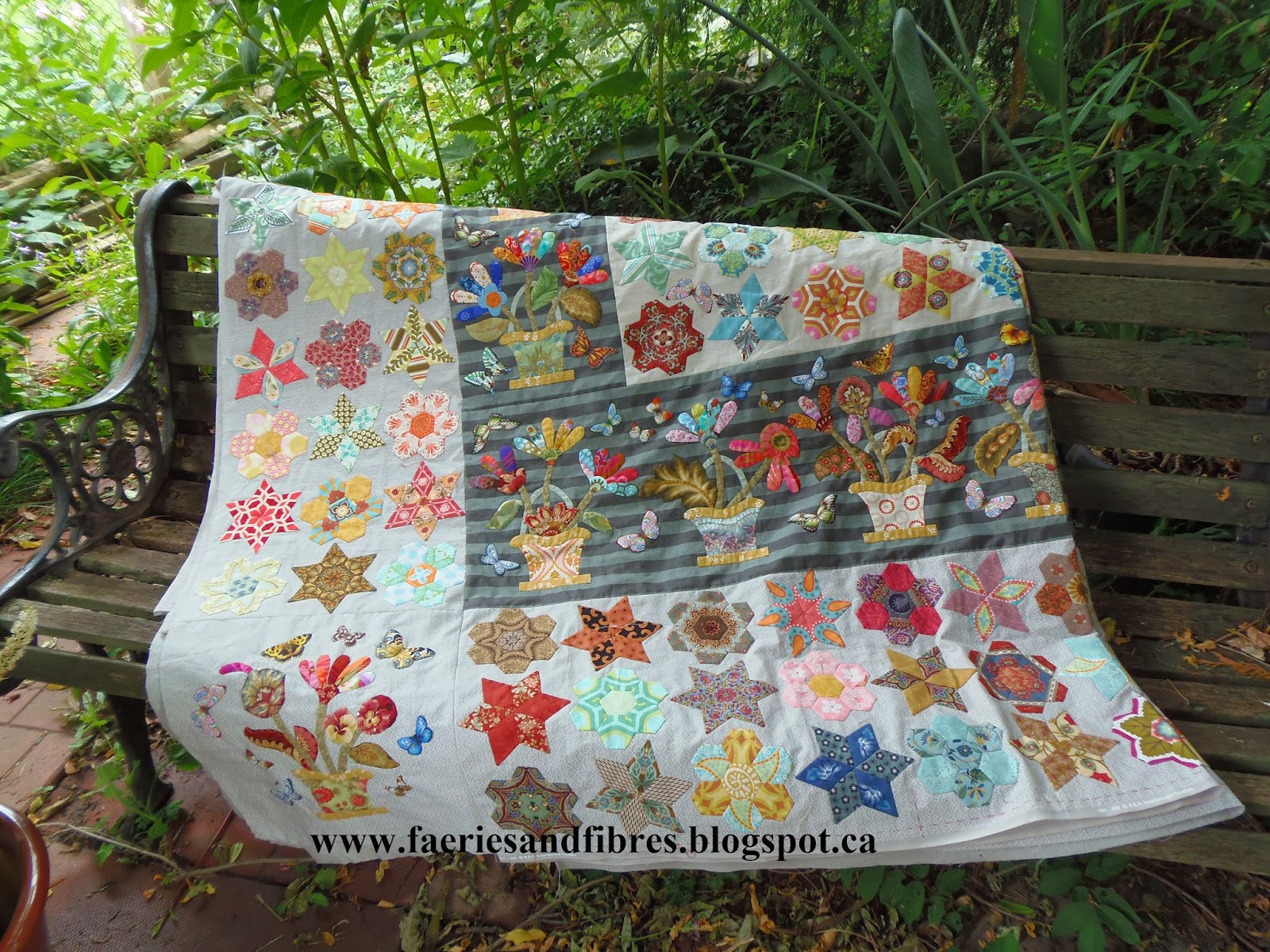 If you have any questions or comments I would love to hear from you! I'm always happy to share what I do and how I do it!

It is a very cold day today so I'm going to have fun in my sewing room playing with fussy cuts! Until I post again, happy sewing!