Yesterday I had a nice day of sewing with friends. One of them decided to do a purge in her sewing room and she had a variety of UFOs up for grabs. Some were hers and some were given to her by others. I have one of them and will share it with you in an upcoming post. It is a bit of a puzzle and a bit of a mystery so I might need some help to figure it out!  While others hand quilted and bound quilts I worked on my Godstone Grannies (GG) blocks and this is what I got done!

The two are partial blocks that will be used to fill the sides. The orange hexagons are all fussy cut. I used the orange fabric in these two partial blocks and also in the next GG block. 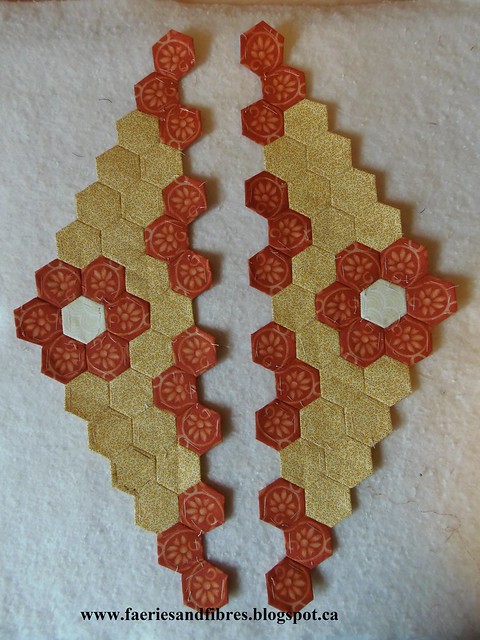 The next block was cut from a solid brown, a brown print and three rust and orange fabrics some of which were fussy cut. I just couldn't get a good picture of the fabrics to show the colours to their best advantage but at least you can see the prints. The orange print in the middle on the right was also used for the two side blocks shown above. 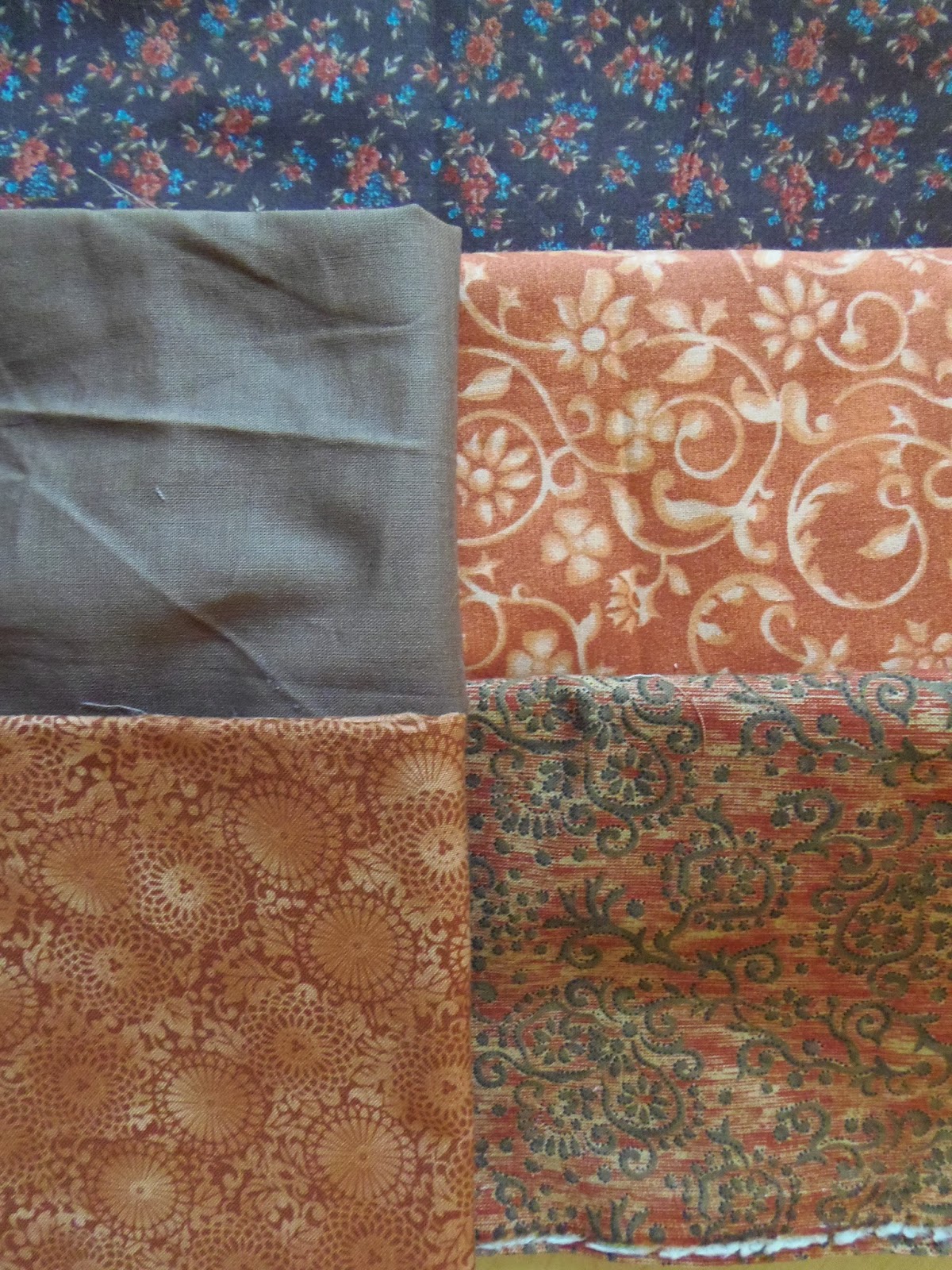 The colours in the picture of my block are much better. I just realized that the four orange circles in the center are stitched together wrong! Oh drat. I've told you before I fix mistakes that will bother me and those that won't I leave as they are. I think that this is one that will bother me so I might just have to do some reverse sewing! Did I say DRAT!!! 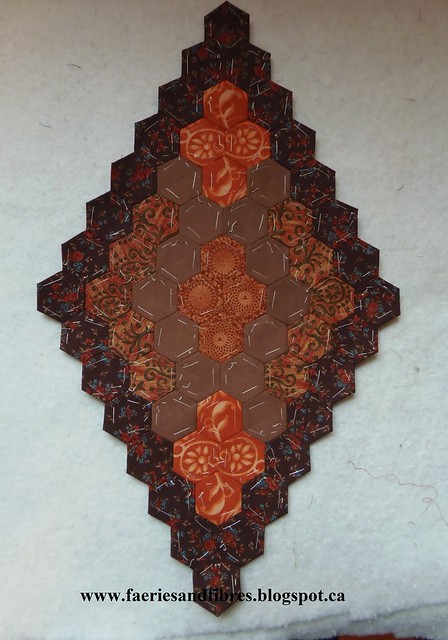 It looks like Chantal likes my GG blocks and she is making her own quilt! How exciting. You can see Chantal's blocks here! Is anyone else out there also making the GG blocks? If so I would LOVE to hear from you!

I want to send a lovely big thank you to Eileen. I was struggling with what to do in the hourglass border on Piccadilly to the Nines and she suggested melon wedges. I had been considering this option so Eileen's suggestion just cemented the deal. I quilted this shape in my Baskets and Nine Patches quilt and it is fast and easy. I did it with my free motion (darning) foot. It is one continuous motion; I stitched an "s" curve starting at the top of the border and I stitched the curve in the little triangle to the left and then the triangle below on the right followed by the triangle below it to the left. When I got to the bottom I stitched the "s" curve on the opposite side. When I got to the top I quilted the curve inside the triangle on the top edge to get me over to where the next "s" curve would start. 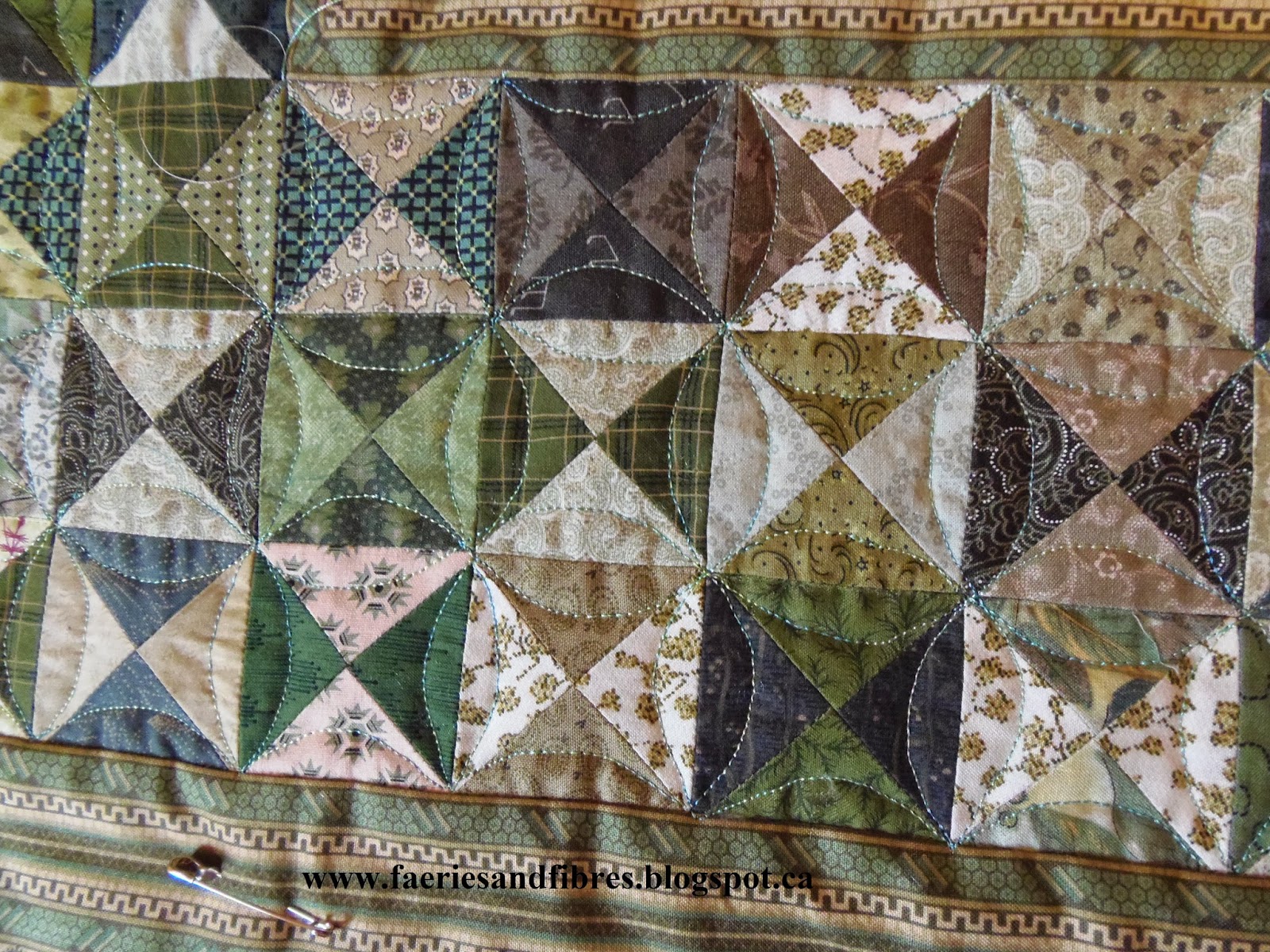 I leave you with one more Soupcon quilt in progress. This one is being made by Raewyn. She posted a picture of her Soupcon quilt at Step 3. I think the fussy cutting is amazing and the embroidery complements it perfectly. I wonder what colour choices Raewyn will make for Step 4. Keep sewing and keep posting pictures on the Flickr group Raewyn so that we can enjoy watching your progress! 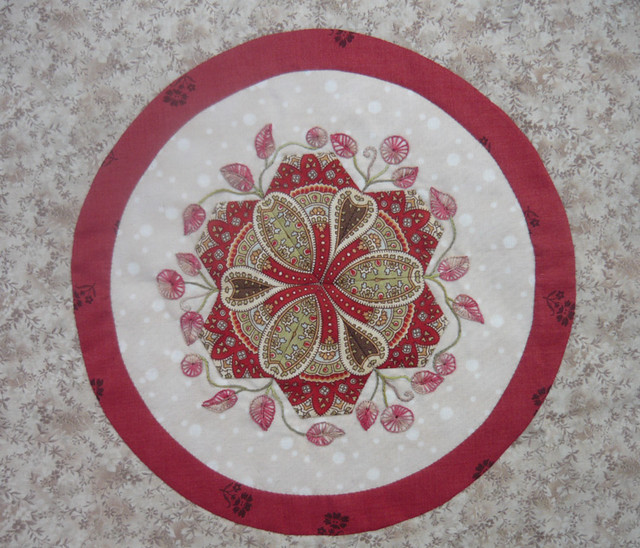 Until I post again, happy sewing!
Karen H
Posted by Karen H at 7:48 AM