The finish line is in sight and another Lozagon hexagon block!

I've had several comments and emails telling me that some of you have purchased the pattern for Gardens of a King from Traditional Primitives. I had a fun time testing the pattern for the designer, Missie Carpenter. I have no financial or other interest in the pattern - Missie asked me if I would be willing to test the pattern and I said yes because I thought it would be a fun thing to do and it was! If you decide to make this quilt I would love to hear from you. I reply to every comment so if you don't hear back from me it means you are a no reply blogger! And now for my progress report on the Gardens of a King quilt top!

All of the applique blocks for the border are finished and framed with butterscotch and caramel coloured fabrics. It won't be much longer until the quilt top is finished. It will measure 63" and I am so eager to get it done. Fingers crossed I'll be able to show it to you this week!

I embellished the hazelnut with an orange butterfly that looks very much like a monarch. 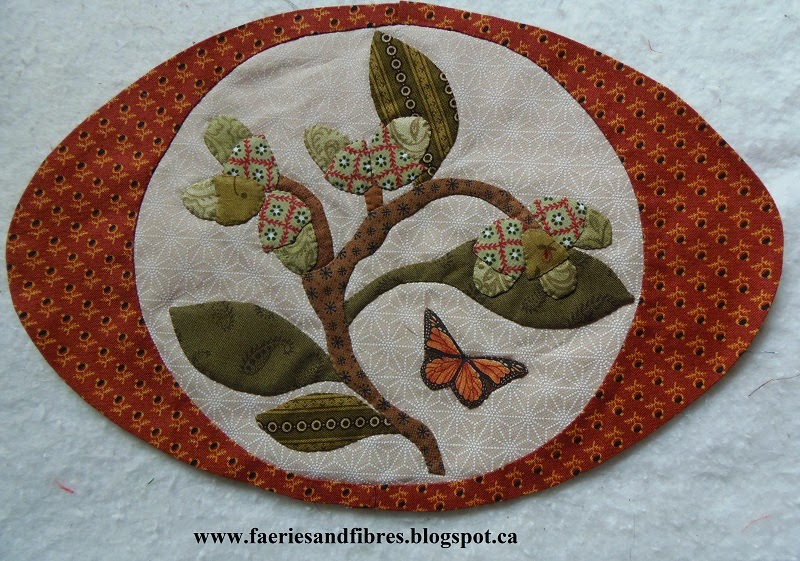 I embroidered a cross hatch design on the burdock and added a brown and cream butterfly. I've glue basted the block to the green border fabric so it is now ready to be stitched! 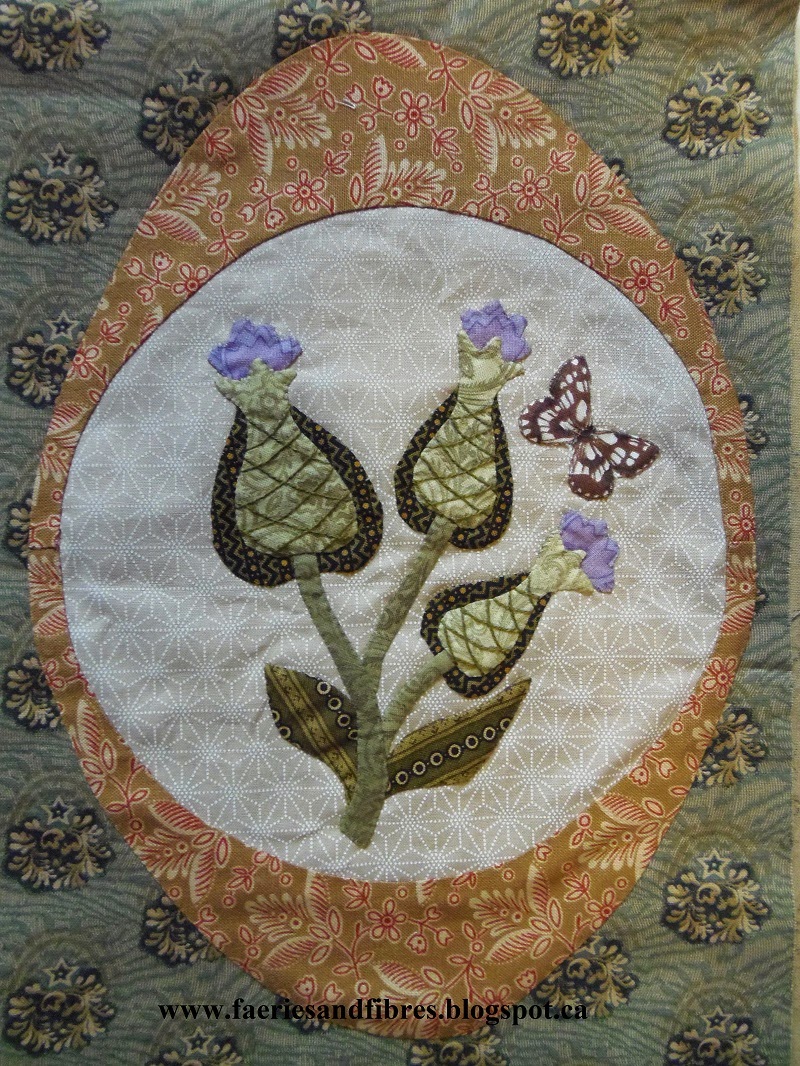 I've also pieced a fourth block for the corner in the green border border. 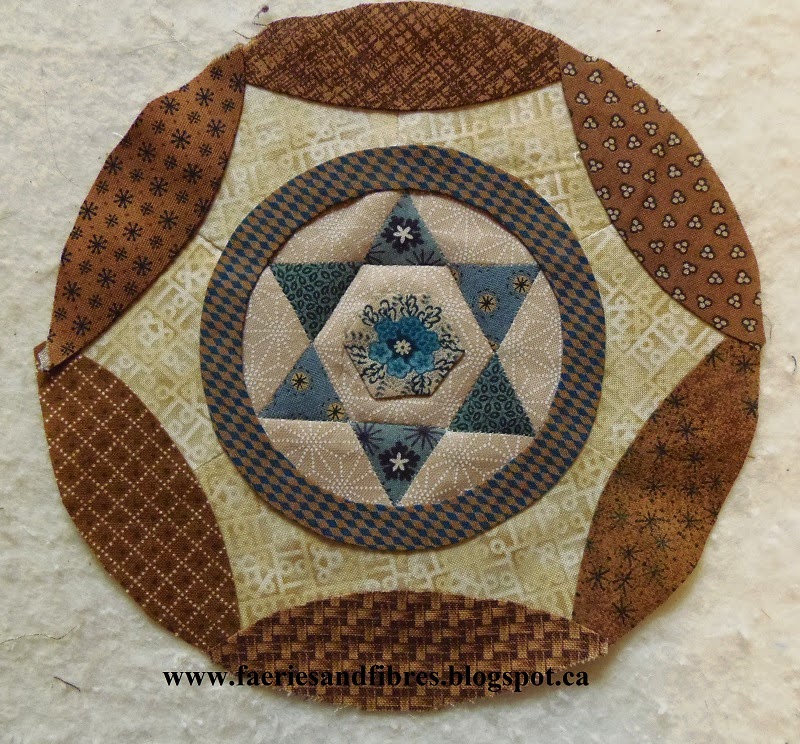 The first three blocks are stitched to the border so the next step is to stitch the stars in between the  blocks and at the ends. Unfortunately the two missing stars have not yet turned up and I've searched high and low so I made two more stars. I have no doubt the original two will be found after I've stitched down their replacements! I love the green fabric; it is a great backdrop for the appliques.

In my spare time I also completed another Lozagons block! This one is a little brighter than some of the others. 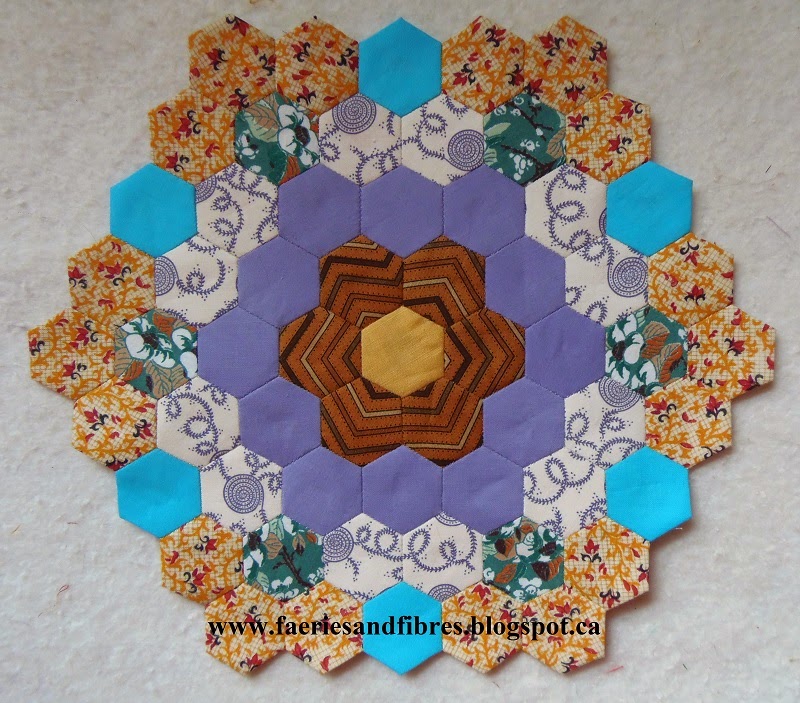 I know it looks like I don't sleep but I get my hexagon blocks by organizing my work so that I can just grab something and sew. I also work in stages. If I feel like cutting fabric I cut hexagons until I get bored. I have little zip lock bags and each bag contains the pieces for one block. I might cut an entire block at once or I may just cut one or two rounds. 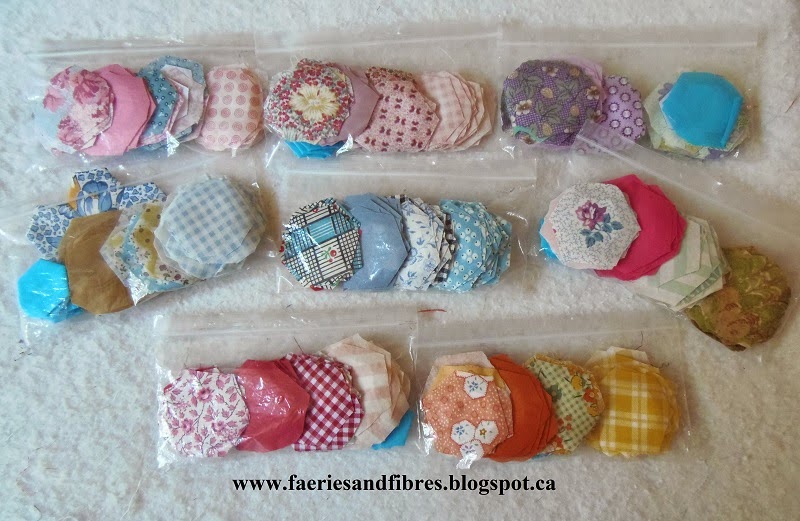 I take a bag with me when I'm out so I have something to do. It is a great way to get the basting completed. All of the basted hexagons go right back in their bag! All of the pieces for the block stay together in the bag until the hexagons are sewn into rounds.

I stitch the hexagons into rounds starting with the first round of six hexagons. The second round has twelve, the third has eighteen and the fourth has 24. I stitch the hexagons together t make the round but I do not stitch it closed - I call it an open donut. In the picture below I positioned the rounds carefully so that they look closed but they aren't. The red circle in the fourth round shows the opening. For more pictures on this process you can go here. I like to work this way because I can use one long piece of thread to attach the round and it minimizes the number of sewing starts and stops! 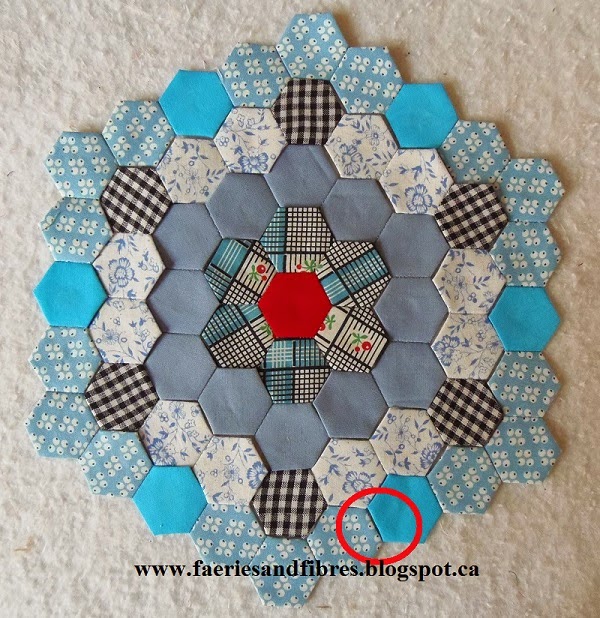 Once I've stitched the rounds I tack them together with a needle and thread and toss the whole thing in a box. It reminds me of a bunch of noodles! 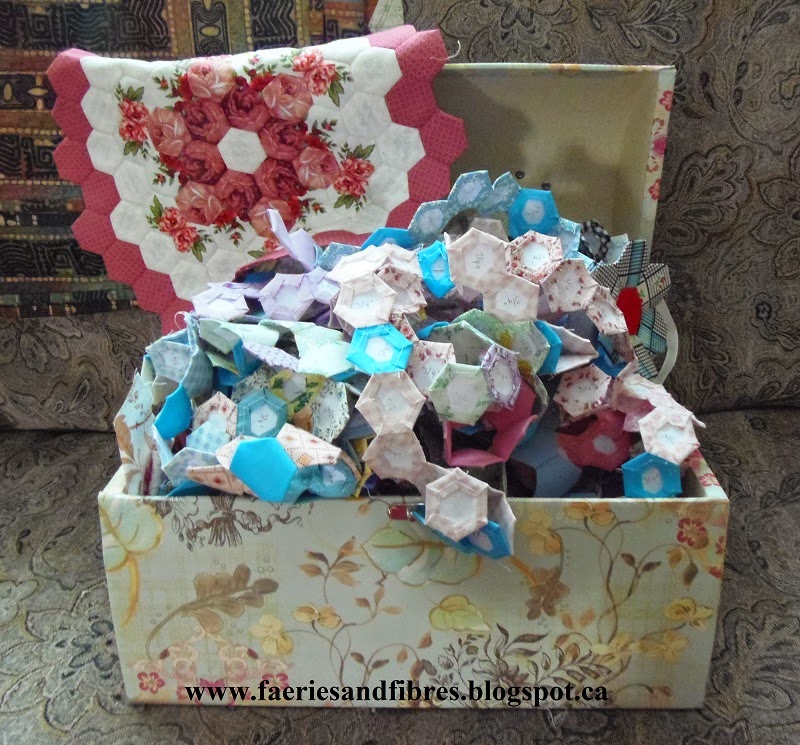 When I need some hand sewing I pull out one of the sets and start sewing. If I don't finish stitching the whole thing together at that sitting I just tack it together with a needle and thread and toss it back in the box! 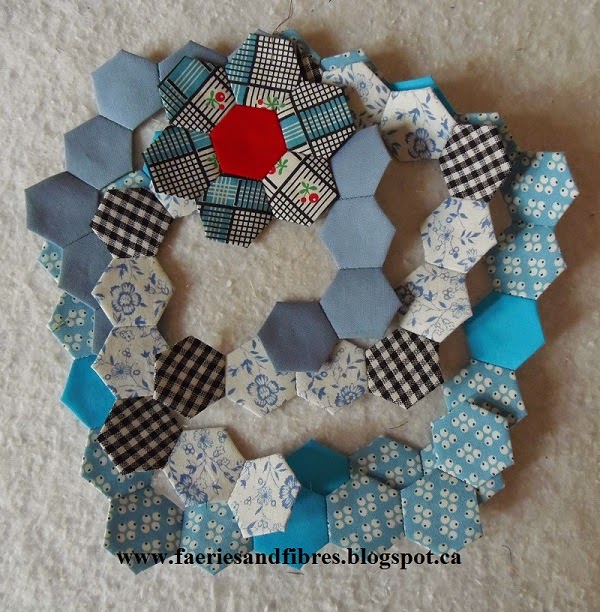 I'm linking up with the Needle and Thread Network. Head on over to see what other Canadian bloggers are working on!

That's it for today - I've got some Gardening to do so until I post again, happy sewing!
Karen H
Posted by Karen H at 5:47 AM

Email ThisBlogThis!Share to TwitterShare to FacebookShare to Pinterest
Labels: Gardens of a King, hexagon quilt, Lozagons