Birds in the Loft - breaking it down into sections

Today I thought I would write my plan for sewing the rosettes together. I had previously shared my diagram for the layout of the rosettes. There are 200 of them in total and they were made in pairs. In the diagram you can see that I numbered the rosettes from 1 to 100 starting in the upper left corner moving left to right. When I got to 100 I started to number the second group of 100 with number 1 in the lower right corner and I continued numbering the  rosettes from 1 to 100 moving from right to left. Arranging the hexagon rosettes in this way will balance the quilt. 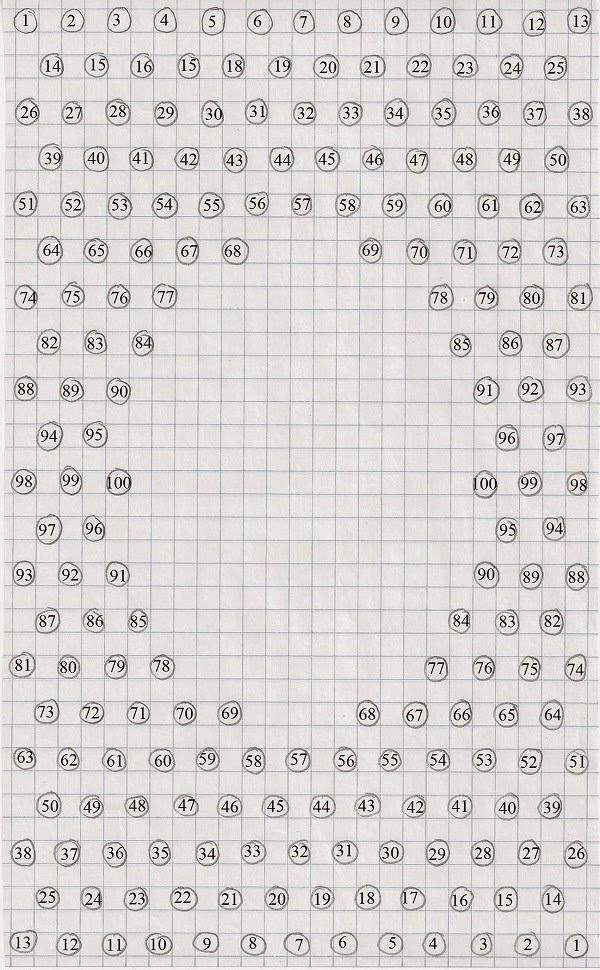 To make the construction easier I've divided the quilt diagram in half horizontally - there are 100 rosettes in each half. 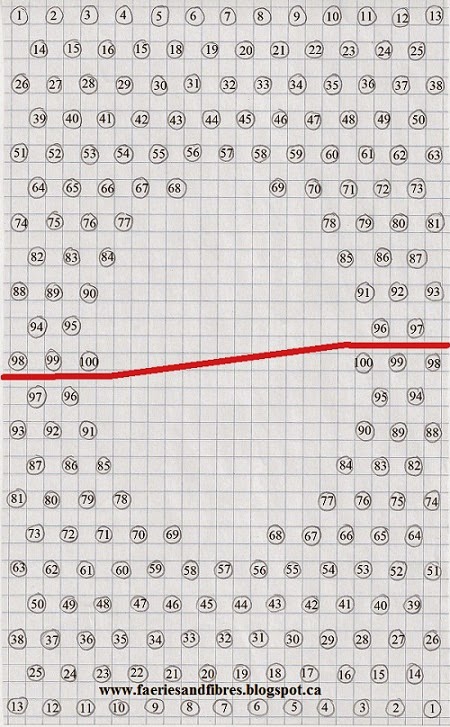 The red circles in the following diagram identify the rosettes that have already been stitched to the medallion. I wrote about sewing together the rosettes to make a "noodle" that would surround the medallion here. I just realized that I never shared a picture of the medallion with the first rosettes attached so here it is! Notice how each rosette is one of a pair and its mate is directly opposite. 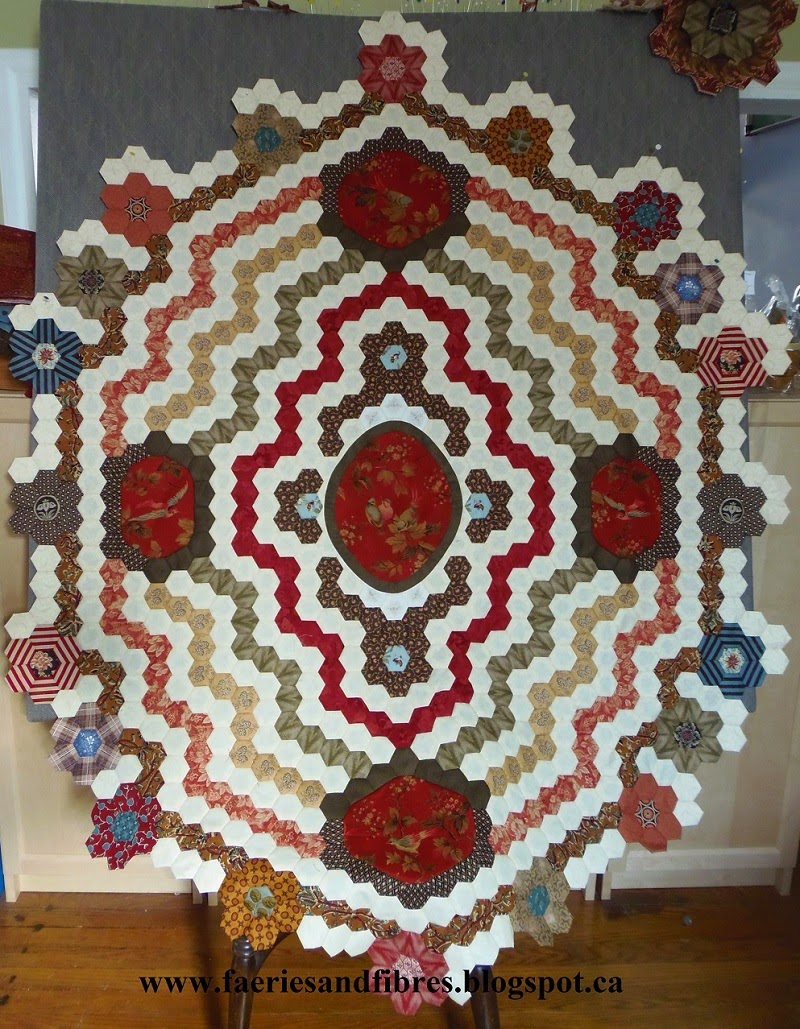 The medallion will be completely surrounded by the remaining rosettes and I want to sew them together in sections to make the sewing easier and to keep the quilt as portable as possible for as long as possible. I've divided my diagram to show how I will sew the rosettes together into sections. I'll construct the four middle sections first but won't sew them to the medallion because there is still a border to be made (and I'm still working on the 200 rosettes). I'll write about how I will organize and sew these four sections soon. 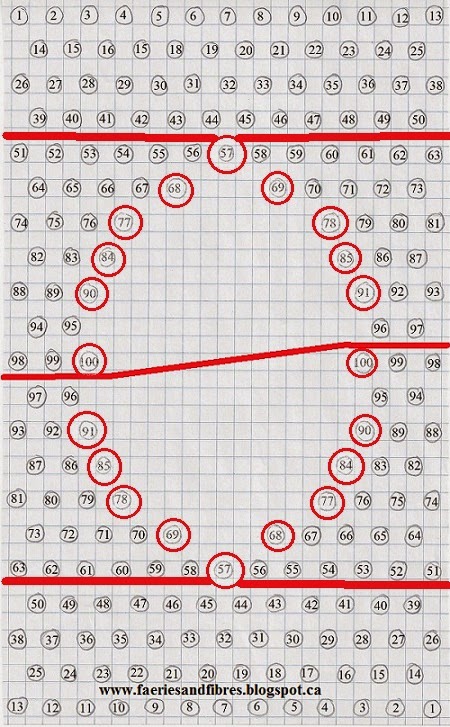 I plan to  divide the top and bottom sections in half vertically for easy sewing. 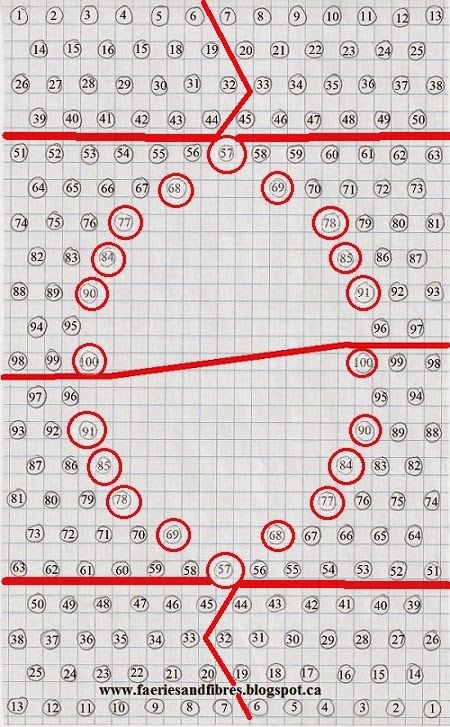 Now it is time to share a few more rosettes.

This one is quite dramatic so I will place it close to the medallion because I think if it is near an outer edge the eye will be drawn to it rather than the medallion. 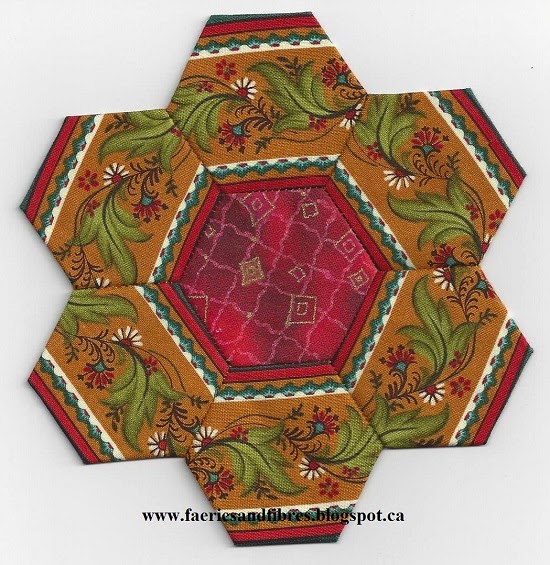 I hadn't added any green rosettes around the medallion so this one should also be relatively close to it. 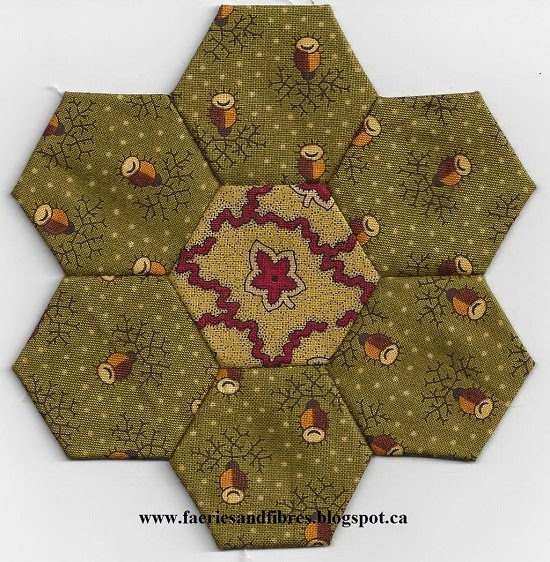 This one reminds me of cotton candy! 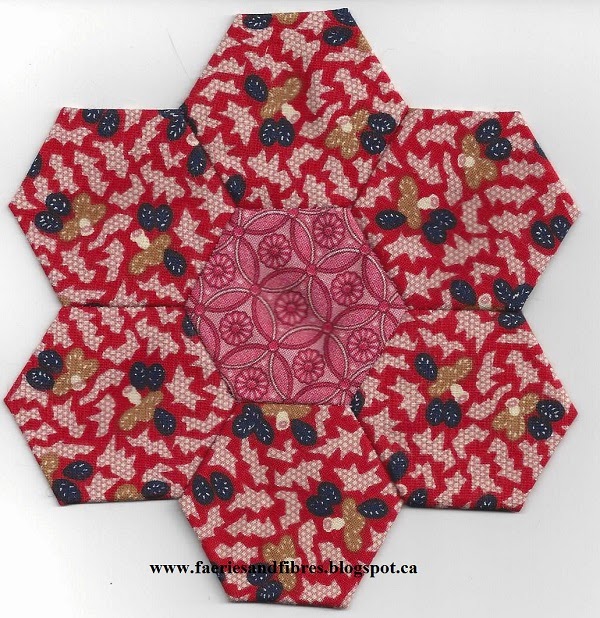 For the most part these three rosettes are not colour combinations that immediately leap to mind so how did I come up with them? I make my open donut and then audition different fabrics for the centre. If  I like what I see I go with it. If nothing tickles my fancy I set the open donut aside for another day. Eventually I will find the right centre and I'll go with it! The centre doesn't have to match but it does have to "go". If you look for fabrics that match you will miss all kinds of wonderful combinations so try your open donut on fabrics that you would never have considered because that's when the magic will happen!

I've almost made all of the hexagon path units that will connect the rosettes; they have to be stitched to the rosettes. The path can be tedious so I like to work on it throughout the making of the rosettes. 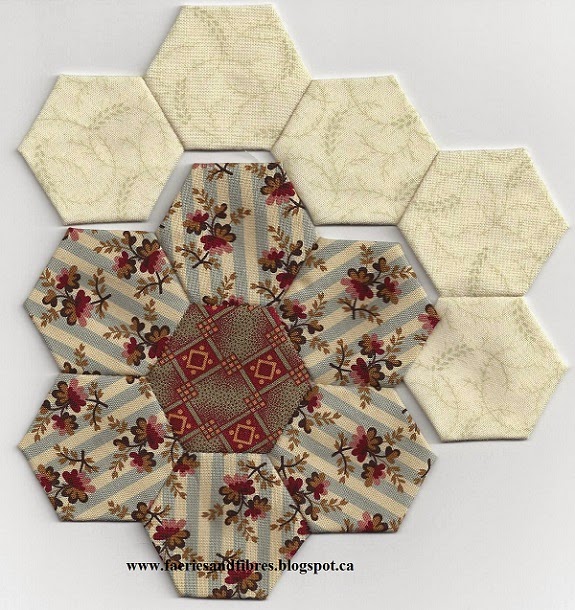 I'm making really good progress and am looking forward to seeing the quilt come together in the coming weeks (or months)!

Until I post again, happy sewing!
Karen H
Posted by Karen H at 6:17 AM

Email ThisBlogThis!Share to TwitterShare to FacebookShare to Pinterest
Labels: Birds in the Loft, hexagon quilt, sections