Experimenting with the fussy cut diamonds

Now that you've cut your sets of diamonds what can you do with them? Let's have fun experimenting! It is the best way to get inspired and find new colour combinations and alternate arrangements!

Yesterday I showed you the first set of diamonds before and after they were basted. You can lay them out in a traditional six point diamond. These following two pictures represent the same set arranged differently. 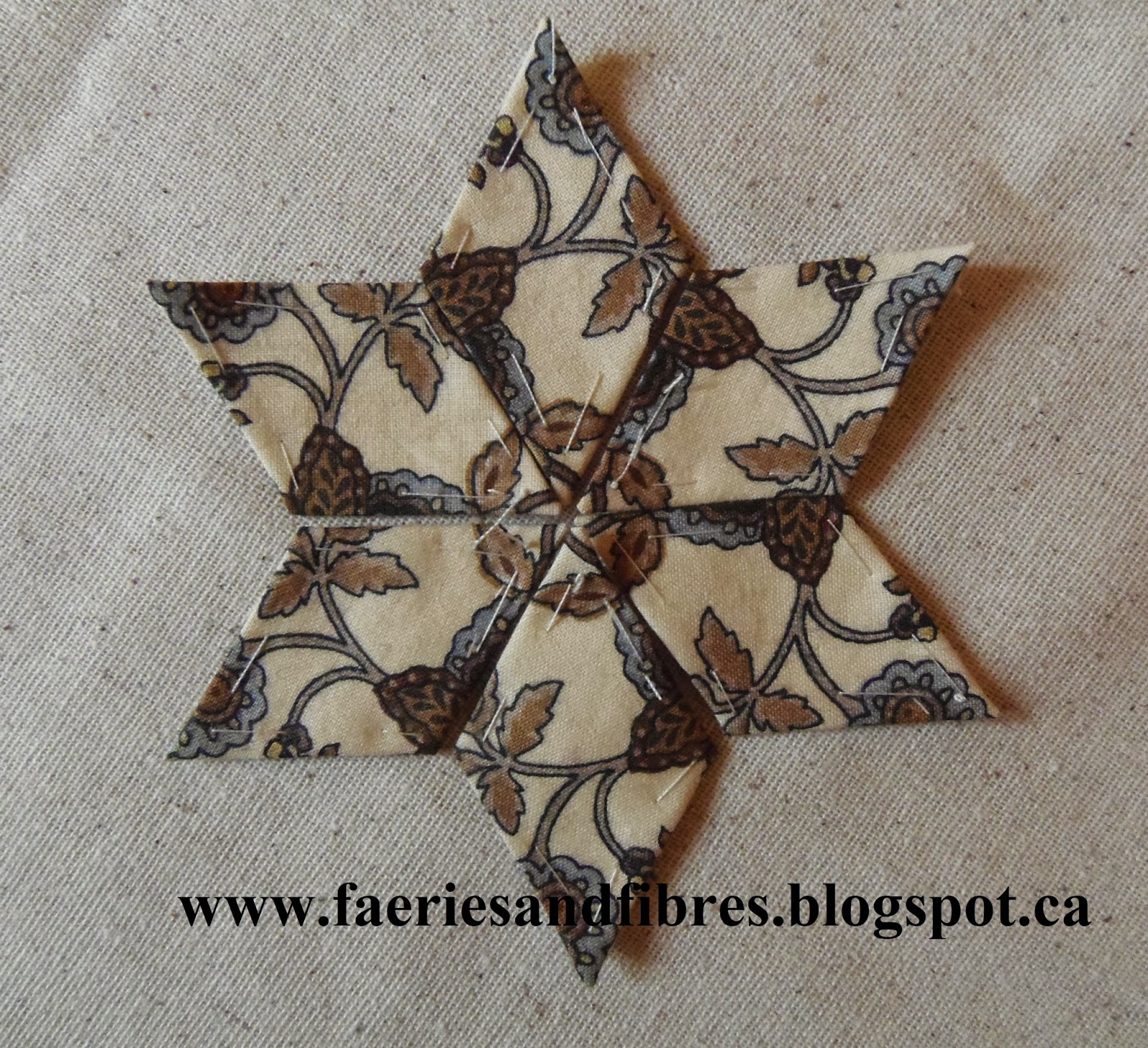 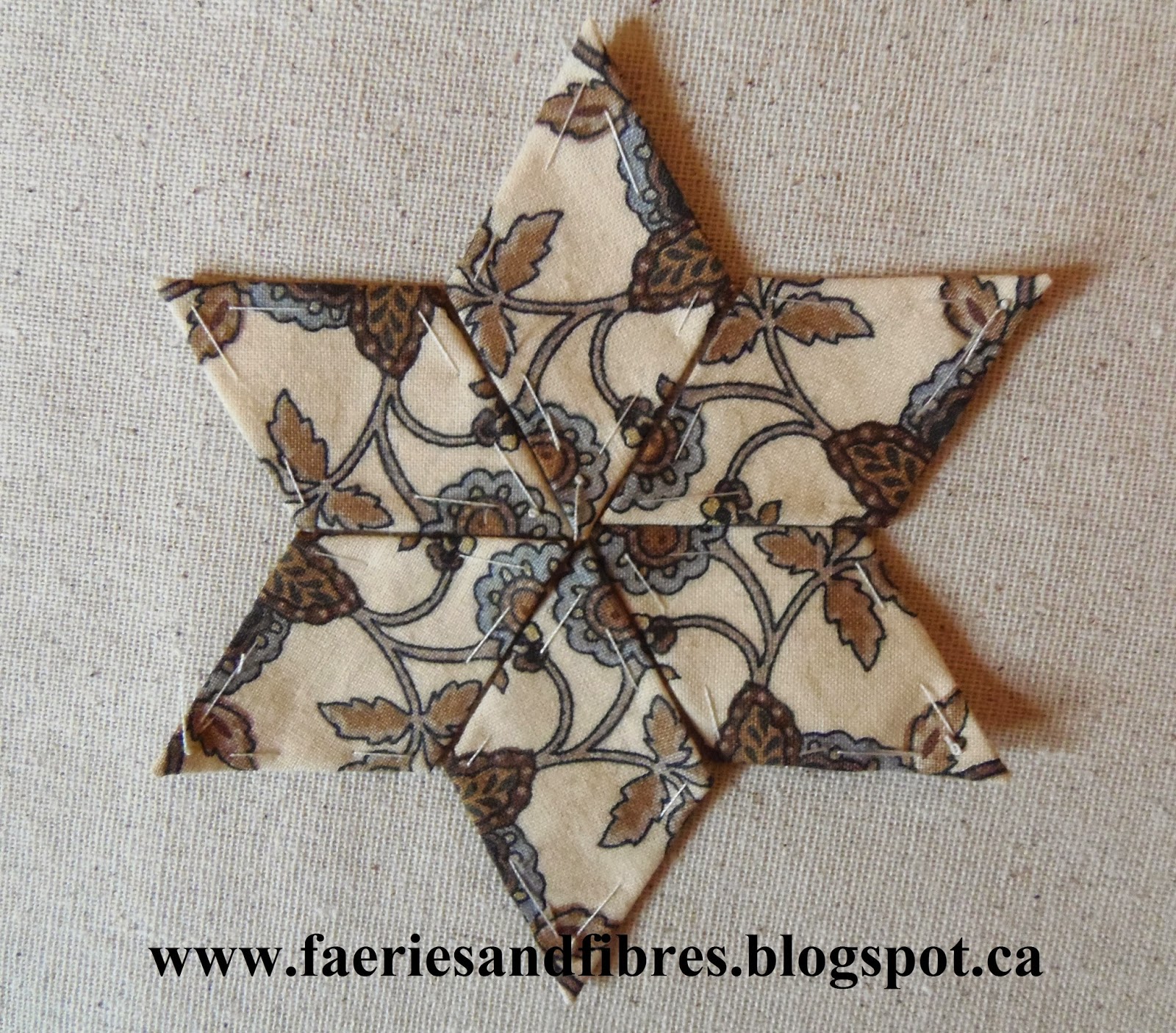 Rather that arranging the fussy cut diamonds in a star, why not use them to fill in the spaces of another simple star to create a hexagon? 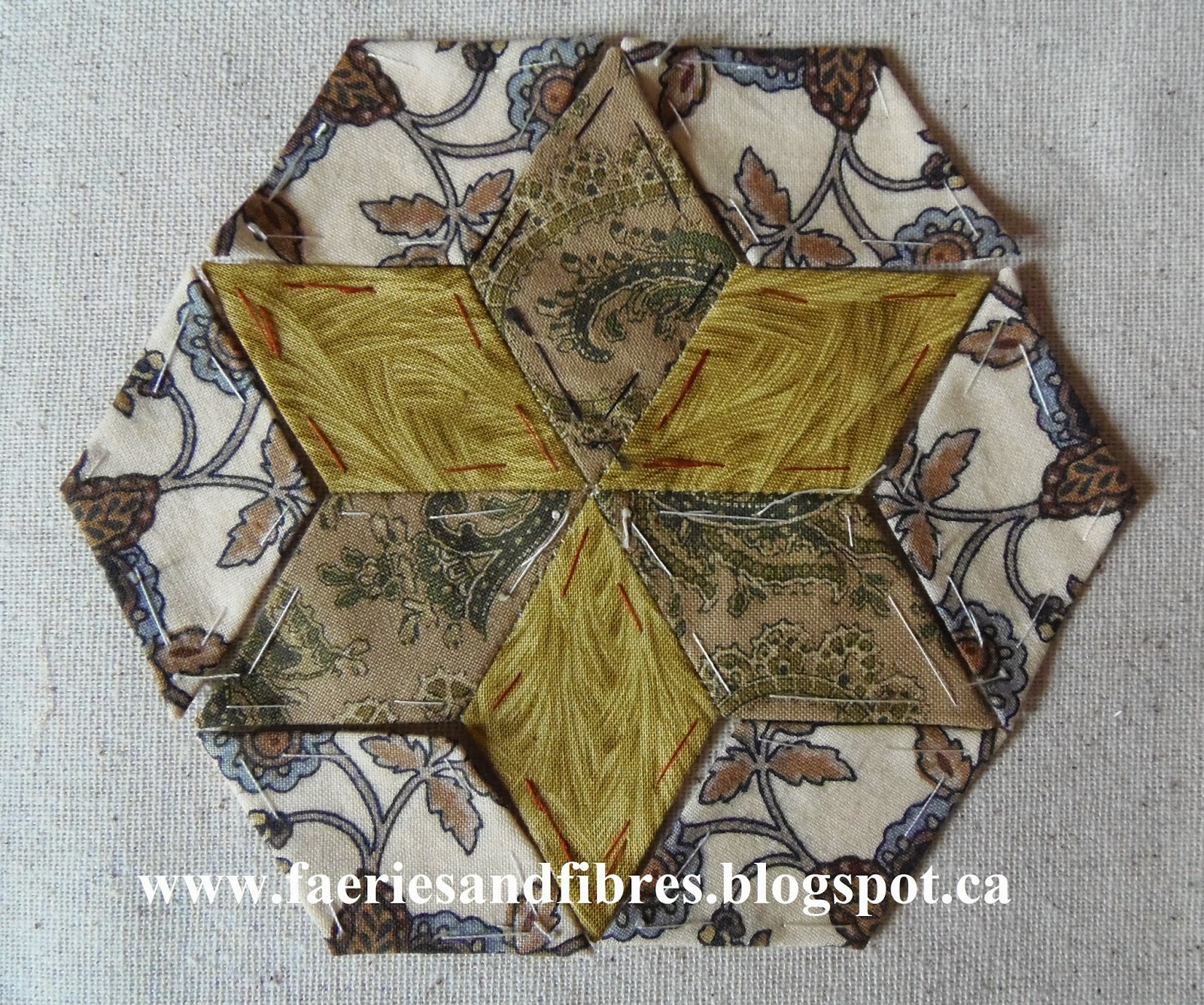 This is a particularly good way to use fussy cut diamonds that just don't look nice arranged in a star (it happens). As filler pieces they can work wonders to make a block sparkle and pop! Here are two blocks from a quilt I call Hexagreens.  The diamonds just didn't work as stars but as fillers they were perfect! 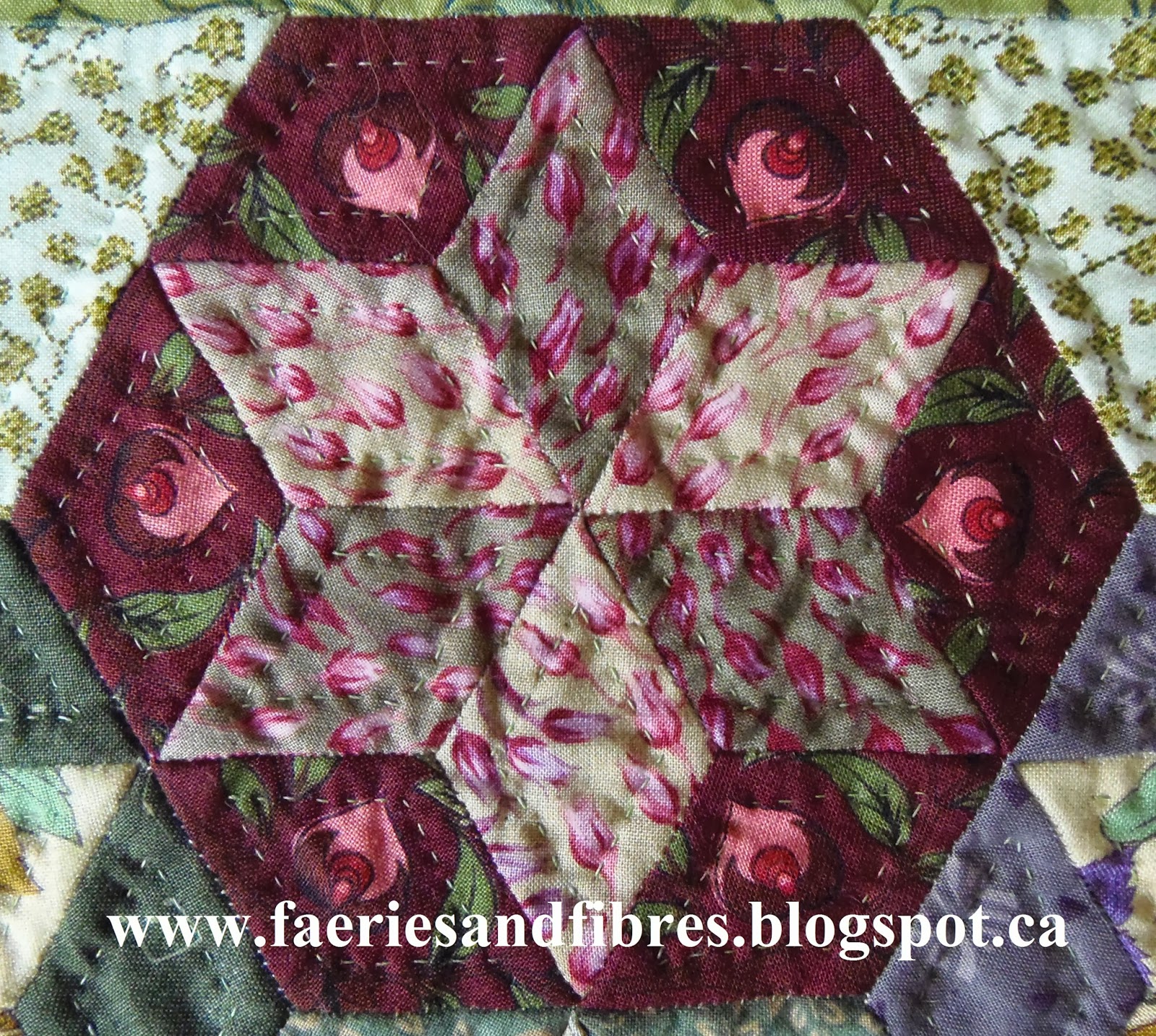 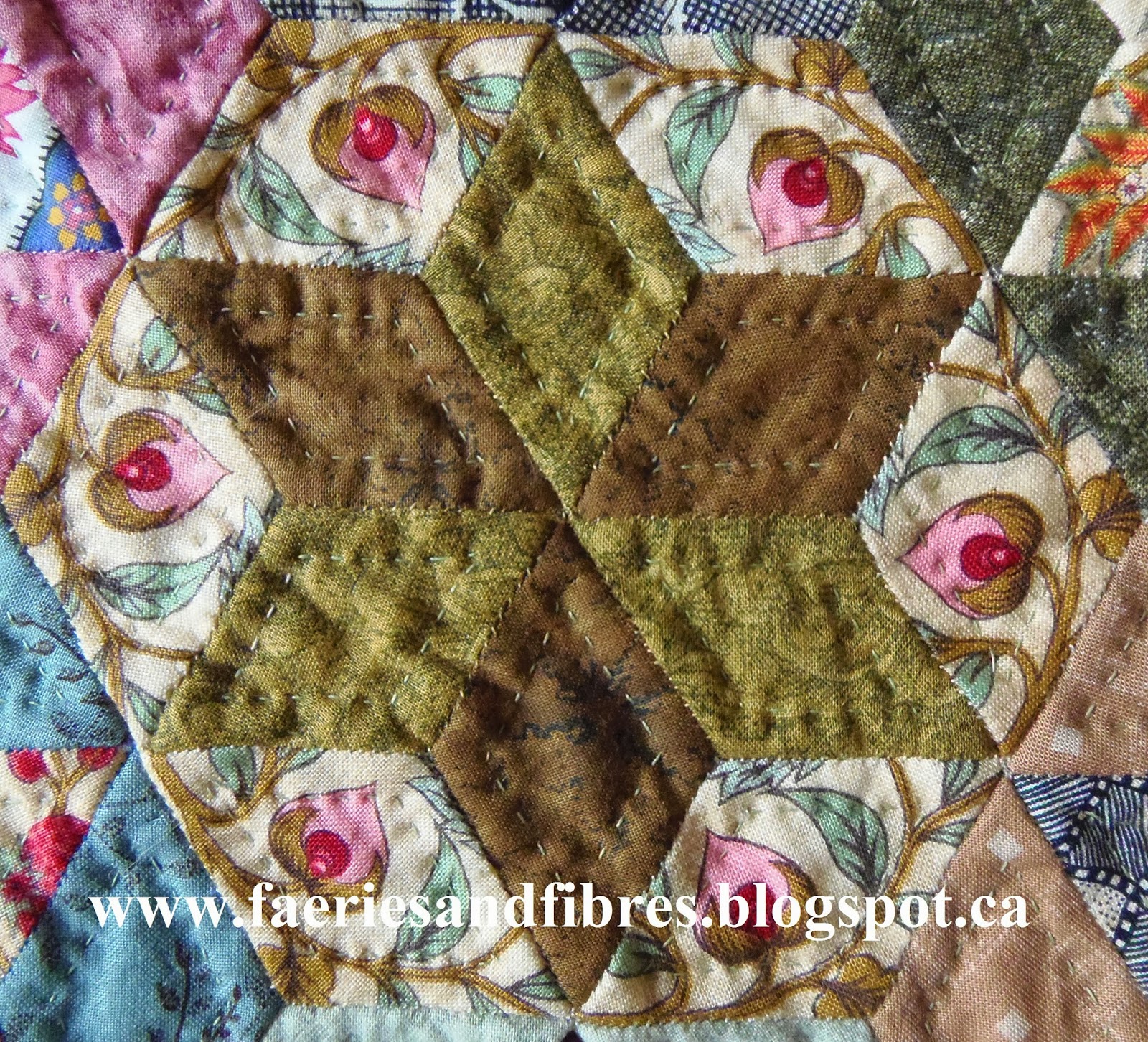 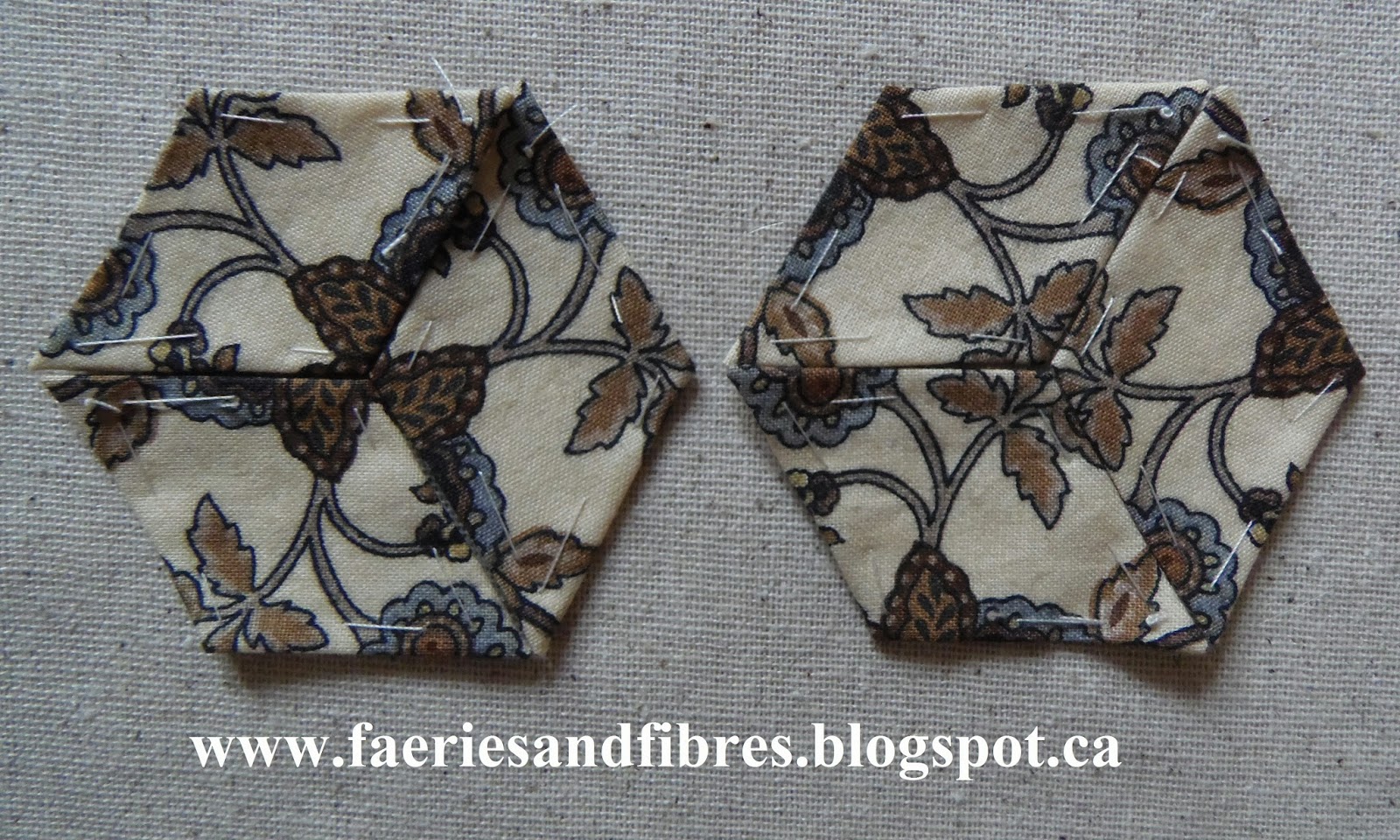 Here is an example of this technique in my quilt Hexagreens! Here's an idea - if you don't have enough fabric to get six repeats to cut the strips for the stars, you can still make hexagons as long as you have three repeats! 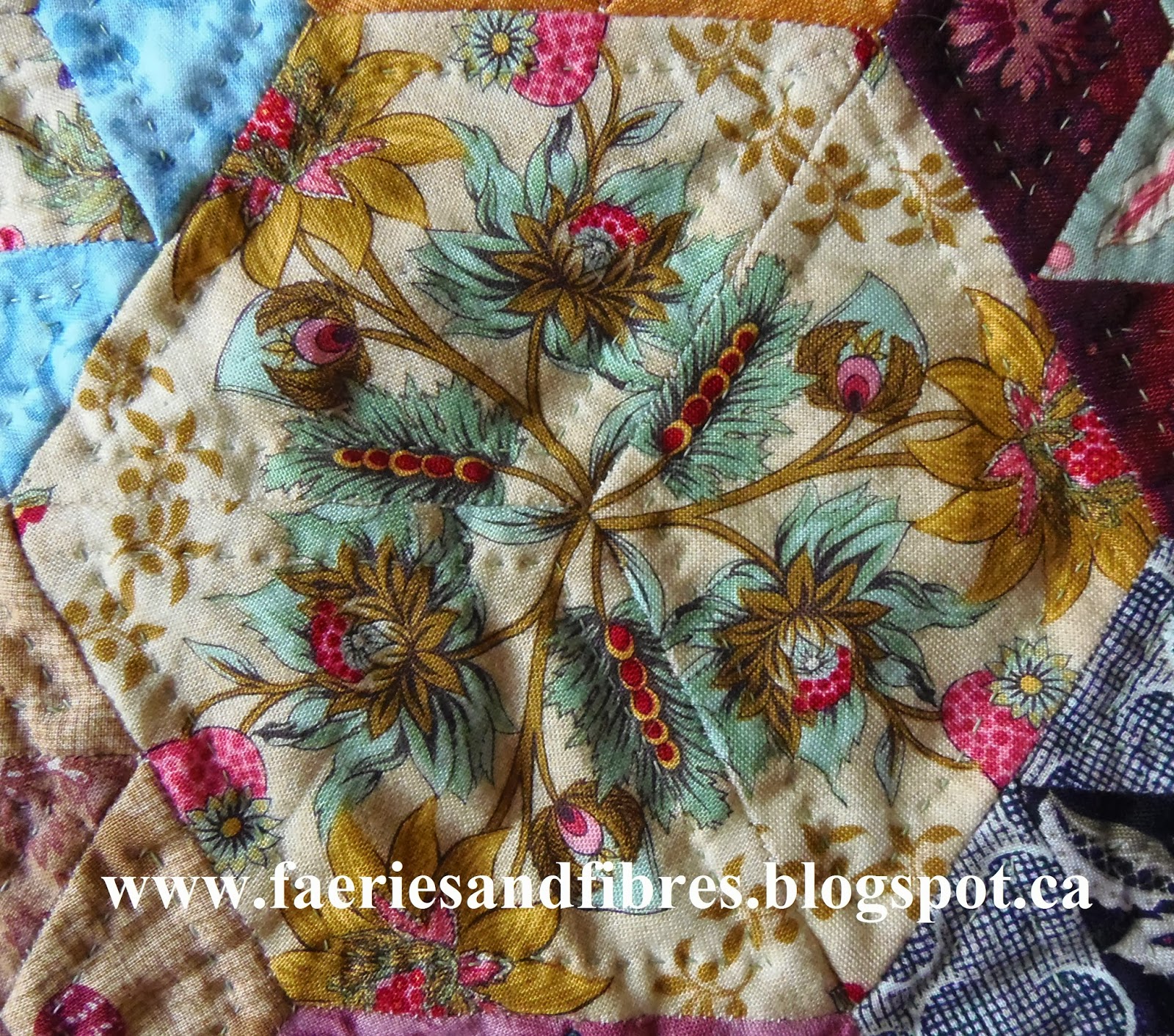 This morning I basted this set of diamonds that were cut yesterday. The same set arranged with different points hitting the centre mark reveals two different stars. 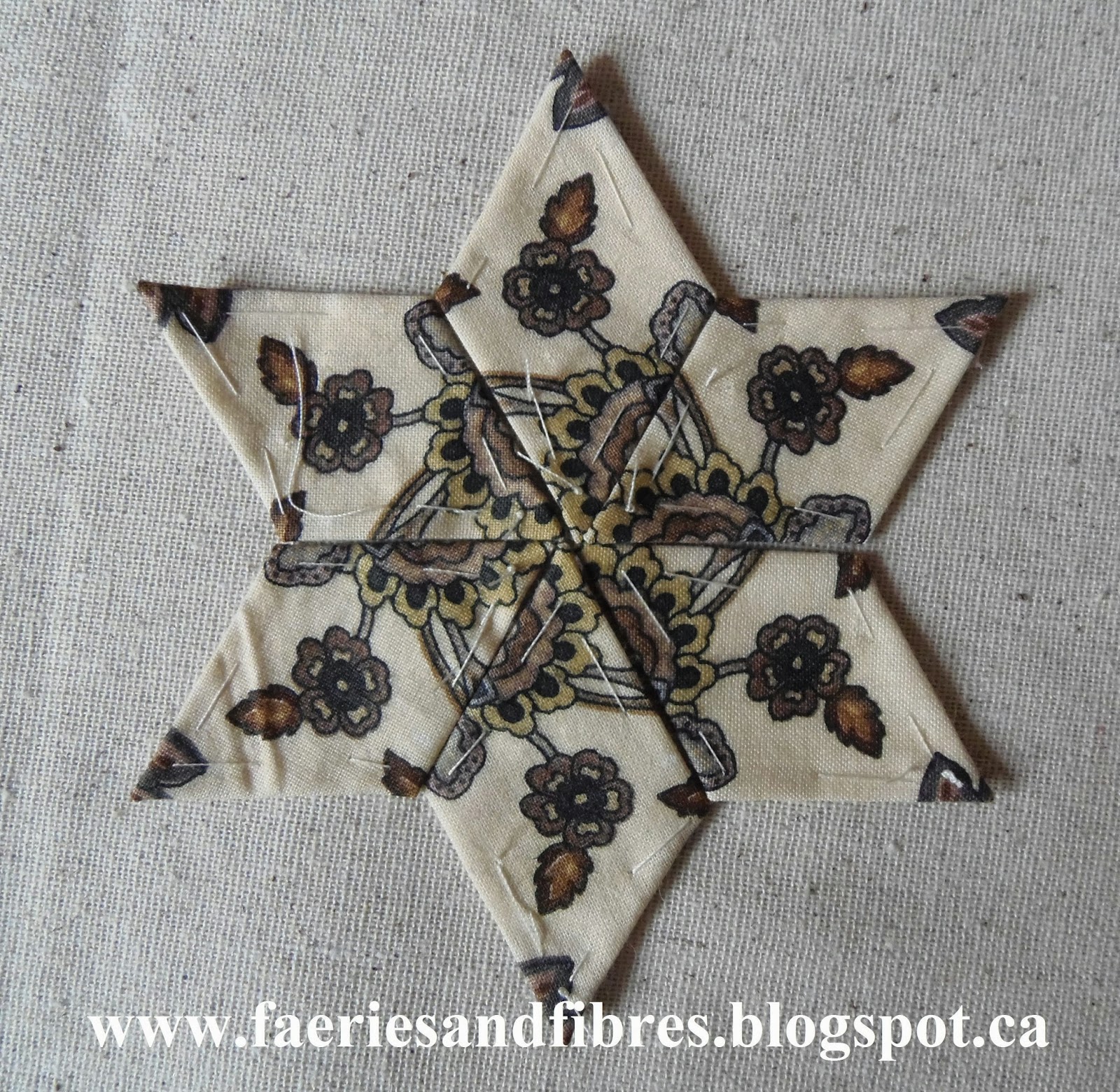 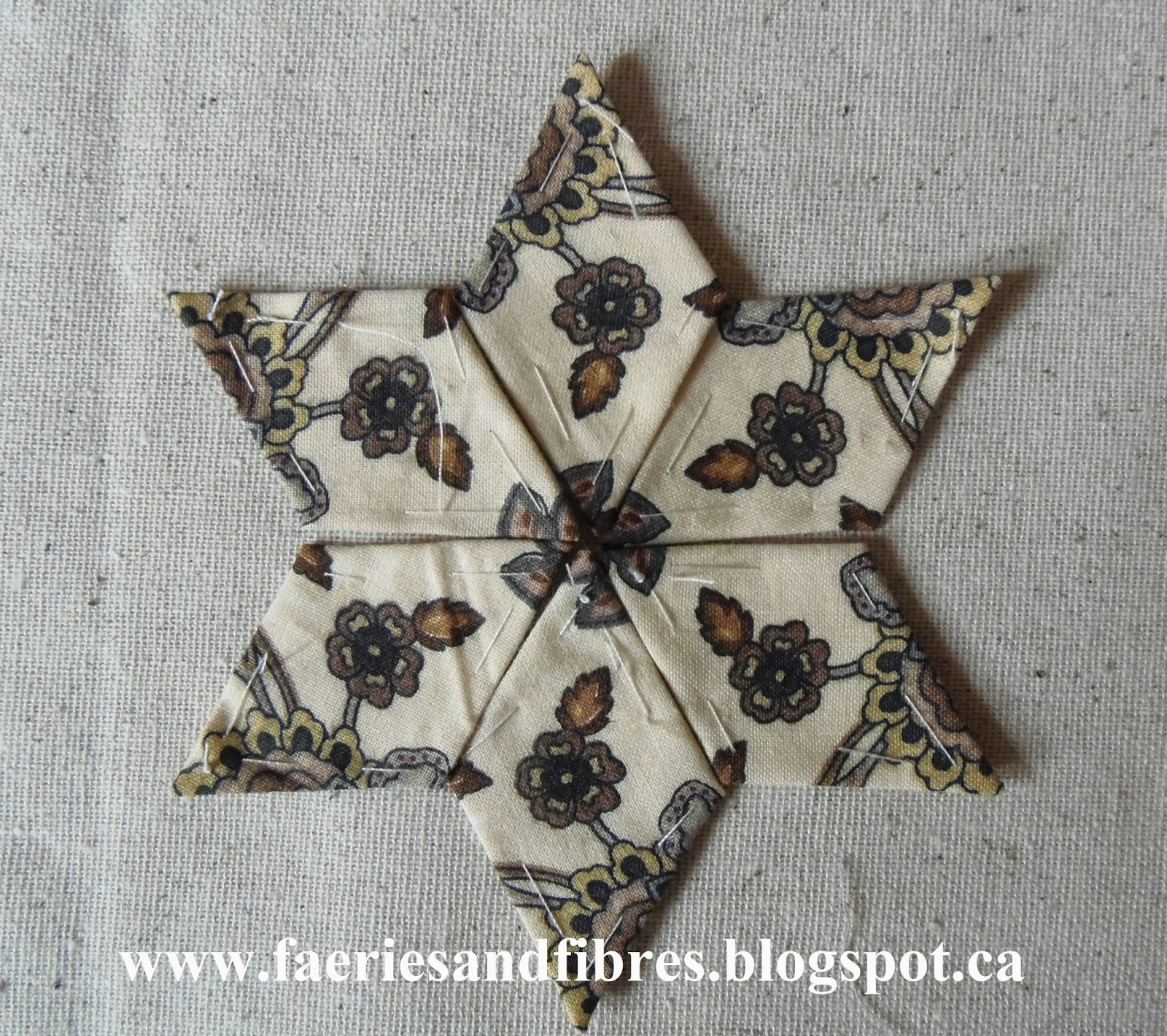 What would happen if we combined the first set of fussy cut diamonds with this set of fussy cut diamonds? Two very different hexagons emerge. BEFORE you start playing around this way a word of advice. The diamonds can look very similar so what I would do is give each set a number and write that number on the paper. For example, each of the six diamonds that make the centre star would be marked "1" and the six diamonds used as fillers would each be marked "2". 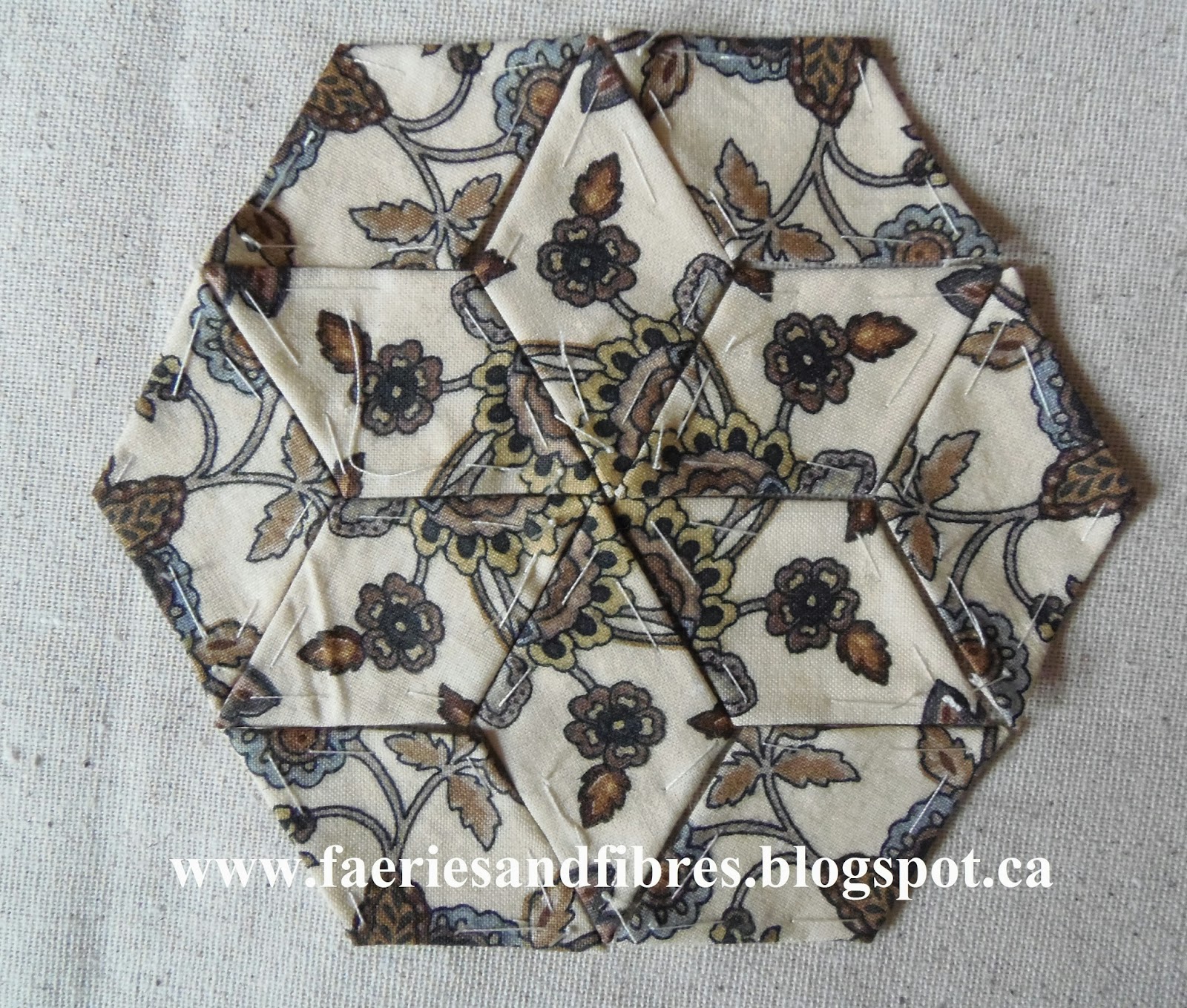 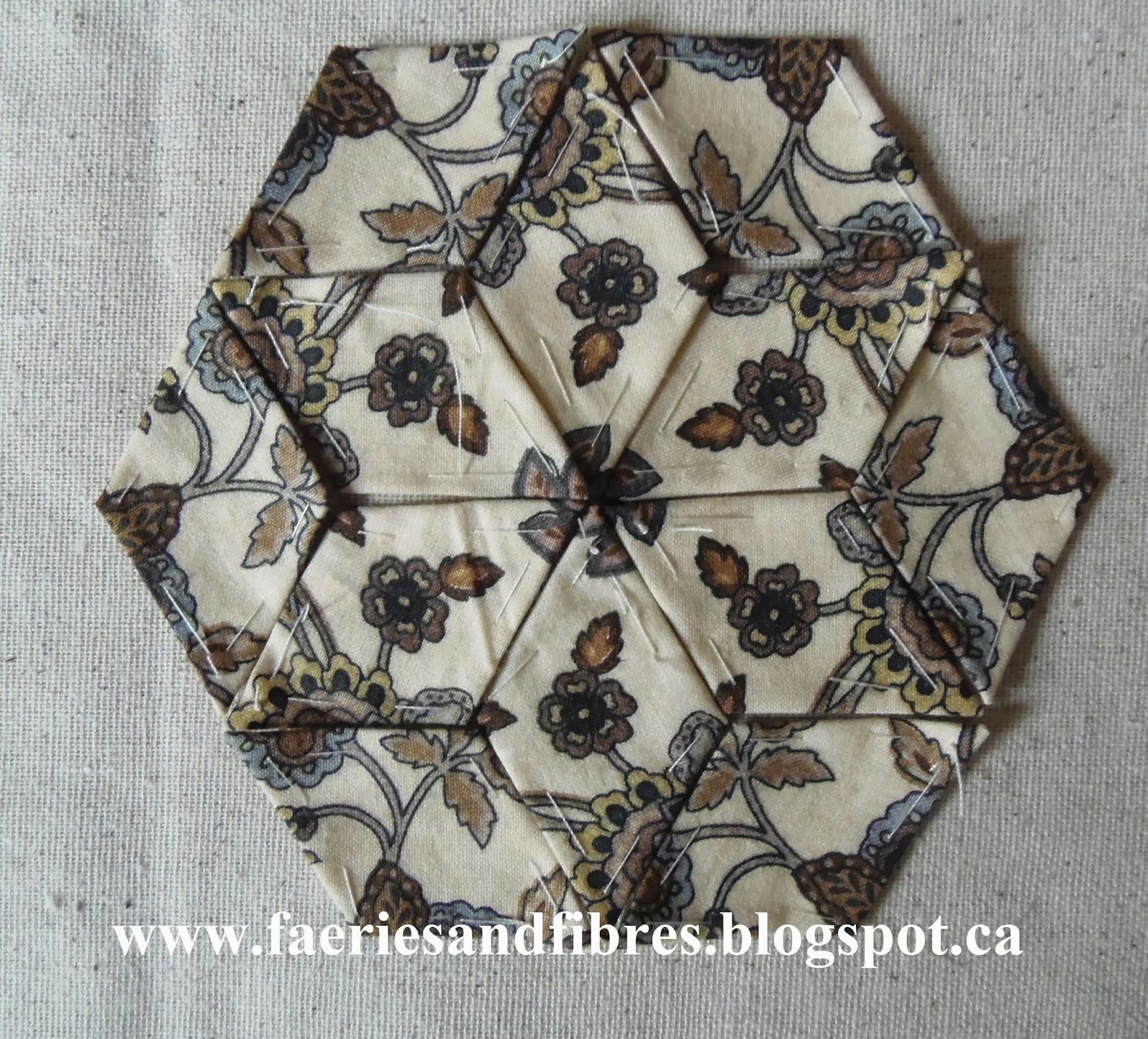 I used this method of combining two sets of fussy cut diamonds in my quilt Hexagreens but I used two different fabrics. The result? Yet another interesting hexagon! 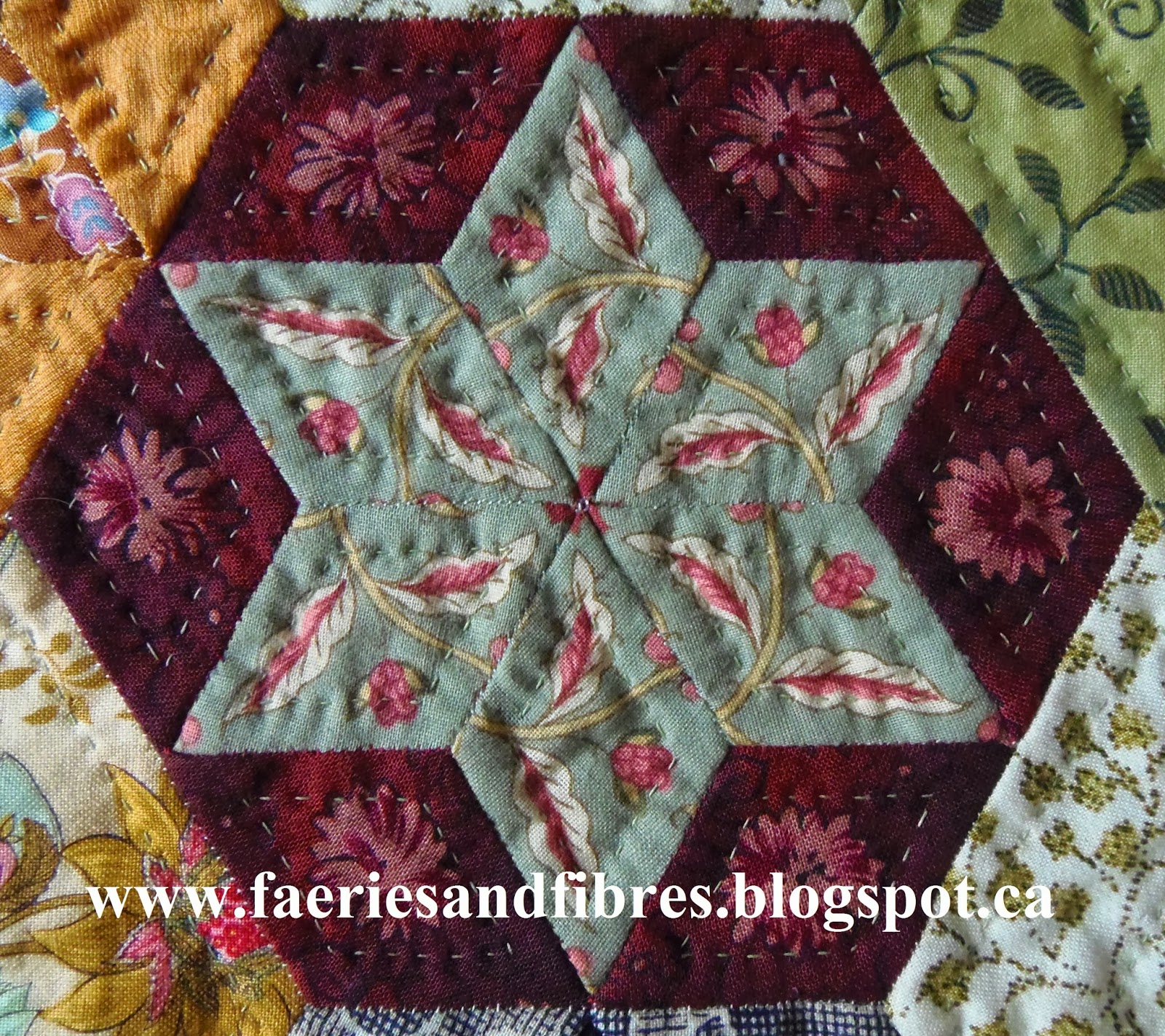 These little diamonds are so much fun to play with and that's exactly what I'm tempted to do. But it is time for me to get back to Lazy Punk so I'll have to set them aside for now. Next week I'll prepare a demonstration on drafting your own diamonds so that you can have some fussy cut (sort of) diamond fun!

Until I blog again, happy sewing!
Posted by Karen H at 6:00 AM